So you grew up playing Gran Turismo and Need For Speed and now you’re grown and you watch YouTube celebrities risking life and literal limb for tire smoke and views. Now that you’re a responsible adult with some money saved up, you might think it’s finally time you’re able to fulfill your childhood fantasy and get a flash Japanese car of your own. But if you’ve ever pulled up a Japanese domestic market (JDM) auction site you’ve probably been confused. There seems to be too many zeros on the price tags…

Your confusion is replaced with anger and subsequent reluctant acceptance. Maybe you’ll be able to afford and settle for a Kei car — or worse, a Nissan Cube.

Finding a decent rear-wheel-drive, manual sports car cheap enough to repeatedly smash into a concrete wall might have been a reasonable goal five years ago — but it’s not now.

Used Japanese cars are no longer guaranteed to depreciate. The writing is on the wall and gas-powered transportation as we know it is likely to become less and less common. Thanks Tesla. Now investors and companies are buying warehouses and filling them with old Nissan station wagons, waiting for the value to increase like wine connoisseurs. 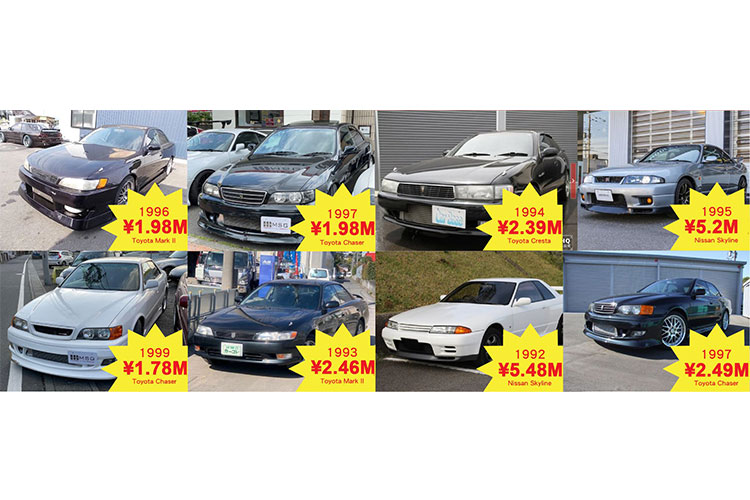 Regardless of whether or not you’re a tire-sniffing gearhead, it’s a good idea to be aware of this market trend because, instead of spending a certain amount of money on a basic commuter car, you could spend it on something that is just as good at commuting but also will hold value or even make you some money later down the line.

If you’re living in Japan, you’ve no doubt heard of the bubble economy of the late 80s and early 90s. The economic growth was unparalleled and salarymen made it rain with yen as if they were flower girls at weddings. Japan’s automotive industry was at an all-time high in just about every market at the time. Toyota founded Lexus and launched it overseas; Nissan was dominating international racing competitions, and Honda was hitting its stride on four wheels after stepping out of motorcycle exclusivity.

With monetary excess comes creative freedom. When your company can afford to bite the financial bullet if it all goes south. This high-risk, high-reward business style led to a lot of unique cars — shoutout to the Honda City — which came with a matching fold-up motorbike in the back.

All the kids with interest in Japanese cars growing up were playing video games that featured these cars, probably under their covers hiding from watchful parents until they fell asleep to dream about the day they might be able to own one.

Bad news is, some countries — like America — never received those cool cars.

Waiting for the green light

When you sell a car in another country’s market, you have to meet all their restrictions. The car has to be crash tested to their standards, and meet all the pedestrian safety laws. This affects things as fundamental as build materials and the shape of the car. There’s also politics and lobbying that comes into play. It’s a significant financial investment for a company, and if they aren’t going to see enough of a return, they may choose not to sell in a certain country.

This is more or less what happened with, well, nearly all of the exciting cars coming out of Japan until 2017 or so. The ones sold in Japan were either just a little more special or completely unique. Often they had a special engine or special features and paint jobs that weren’t available for foreign market versions of the same car. That’s assuming the car was even offered to the foreign market.

What changed? The generation that grew up with fever dreams about cars that have all the pistons in a straight line can now afford to pay a little – or a lot extra to make those dreams a reality. Now that the cars of that generation are mostly over 25 years old, many can be imported into America without regard for their original restrictions. This opens up a market of literally millions of potential buyers to Japanese cars that are only produced in the tens of thousands.

The past year has seen a marked increase in used car prices across the board, not just Japanese cars. Whether that’s related to COVID-19 somehow or just a side effect of the rise of electric cars, the world is becoming increasingly unsure of the future of gas-powered enthusiasm and people are turning back to classics in the hopes of holding onto a slice of their childhood dreams.

Now everyone wants a piece of the pie, and anything with a shred of historical relevance is fetching premium prices. The value of many of these cars seems to be scaling beyond their intrinsic value as a product. It all feels very Doge coin, and that begs the question: when will the bubble pop?

It’s a complicated subject, but the answer is simple. It’s supply and demand — and demand is high.

Update on Use of Unmanned Aerial Vehicle Systems

Time to pay up!: It's road tax season in Japan!

10 things foreigners need to know about driving in Japan