Where to see Sakura (cherry blossoms) in Japan

Where to see Sakura (cherry blossoms) in Japan

In this article we do a deep dive, sharing the Japan cherry blossom forecast, about sakura viewing culture, and where are the best places to see cherry blossoms in Japan.

When is the best time to see cherry blossom in Japan 2021?

Cherry blossom usually bloom between mid-March and early May. In 2021, cherry blossoms are expected to open around March 23 in Tokyo.

In 2020, Tokyo's cherry blossom season officially began on March 14, when flowers opened on a Someiyoshino tree at Yasukuni Shrine. This was the earliest ever bloom in Tokyo.

While the dates change somewhat from year to year, there are areas in which cherry blossoms bloom even earlier!

One is the town of Kawazu, which is about 3 hours south of Tokyo along the Izu Peninsula coast. Kawazu is known for a unique variety of cherry tree, known as Kawazu-zakura, which blooms around a month earlier than typical blossoms.

nother area is in the city of Atami, roughly 90 minutes south of Tokyo, where Atami-zakura bloom along a peaceful stream. These, too, bloom approximately a month earlier than typical Japanese cherry blossom.

Cherry blossoms in Japan bloom for about a week. But if you can’t make peak bloom, fear not: you can also see late-blooming cherry blossoms in colder regions as well, through April. Also, know that "peak bloom" does not mean that the trees immediately shed their blossoms - you will still be able to enjoy them for about a two-week window.

When is Japan’s cherry blossom season expected in 2021?

The Japan Meteorological Corporation's official cherry blossom forecast was released on January 14, 2021. Cherry blossoms in Tokyo are expected to open around March 23, 2021. Other places are listed below.

The forecast is based on various factors, including temperature lows in autumn and winter, and past area data.

In 2020, many of the cherry blossom viewing events and festivals were canceled due to Covid-19. It is expected that a similar pattern may happen in 2021. 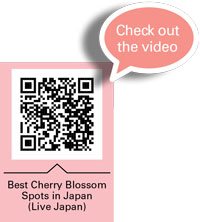 Where is the best place to see the cherry blossoms in Japan?

Japanese cherry blossom hotspots can be found in over 1,000 locations across the country, so choosing just one best place is tough. We’ve found it easier to come up with our sample of stunning spots by region

In the colder areas of Northern Japan, cherry blossom season typically occurs later than in the rest of the country. Sakura in Sendai in the Tohoku region were forecast to open at the end of March.

The last cherry blossoms in Japan to open are expected to be in Hokkaido toward the end of April.

A park designed by the sculptor Isamu Noguchi. The whole area is an artistic space with enormous sculptures interspersed throughout the park, and in spring it comes alive in bright pink with blossoms.

A star-shaped fort with the first French-style fortifications in Japan. Goryokaku was designated as a national special historic site and the surrounding park is known for its famous cherry blossoms. The 107m-high Goryokaku Tower adjacent to the park is a spot where you can marvel at a unique view of the gorgeous Hokkaido cherry blossoms from above.

One of the One-Hundred Views of Japan, here you can enjoy a splendid view of the Furano Basin and Tokachi mountain range, with some 3,000 cherry blossom trees spreading out in front of you.

Named for the mythical creatures of Japanese folklore, Mt. Tengu offers gorgeous views of Otaru and the Sea of Japan. In springtime, some of the cherry trees are lit from underneath, creating a dramatic scene.

With around 3,500 cherry trees, Asahikawa Park is a famous stop for many tourists to Hokkaido. The trees are lit up at night during the season.

Attracting many visitors every year and recognized as a national natural treasure, this is one of Japan’s Three Most Famous Cherry Blossom Trees. A walking path is paved around the large weeping cherry tree, which is believed to be over 1,000 years old.

The Shiroishi River, which flows through the southern part of Miyagi Prefecture, is lined with about 8 kilometers of cherry blossom trees along its embankment in an area called “Hitome Senbonzakura”, creating a stunning landscape with a backdrop of the majestic snow-capped Zao Mountains.

Covering about 49 hectares and containing around 2,600 cherry trees, Hirosaki Park is known as one of the best cherry blossom viewing spots in Japan.

Kakunodate, in Akita Prefecture, is a popular tourist spot where the old streets of 390 years ago remain. Bukeyashiki-dori is a place where many samurai residences were built. Towards the end of April every year, the streets become decorated in pink weeping cherry trees, which create a stunning view when contrasted with the black board fences surrounding the samurai residences.

Worshipped as a sacred mountain since ancient times, Mt. Iwaki is home to about 6,500 cherry trees line a 20km stretch of road which are in full bloom from late April to early May.

These well-designed gardens are said to be a masterpiece of garden landscapes in Japan. It is a place where you can fully enjoy the scenery in every season. About 1,000 cherry trees from 65 species bloom in spring.

About 800 cherry trees blossom along Megurogawa which stretches for about 3.8 kilometers. While there are no parks here, you can enjoy cherry blossom viewing while having drinks and meals in the cafes and restaurants along the river.

Yoyogi Park is the fifth largest Tokyo municipal park and the wide-open spaces under cherry trees attract crowds of people in springtime to enjoy hanami.

A time-honored Japanese landscape garden with a gentle atmosphere designated a Special Place of Scenic Beauty. Weeping cherry trees here during spring are a must-see.

Ueda Castle is a famous castle built in 1583, and the surrounding area is filled with over 1,000 cherry trees that bloom spectacularly in spring.

The oldest existing five-tiered, six-story castle in Japan, Matsumoto Castle is especially famous in spring, when cherry blossoms bloom everywhere around the castle. During an evening event, cherry blossom trees that line up along the outer moat are lit up, and when you walk in the pale pink transparent light you'll feel positively enchanted by the romantic scene!

Kenroku-en is one of the three most famous gardens in Japan. About 40 types of cherry blossoms and about 420 trees are planted where, which bloom in mid-April. It is also selected as one of the 100 Best Sakura Spots in Japan.

Shinshu Zenkoji was founded as a temple in the year 642 and ringed by a gorgeous assortment of cherry trees and weeping cherry blossoms.

With over 1,000 cherry trees on its grounds, Himeji Castle is renowned as a cherry blossom viewing spot. During the cherry blossom festival, you can take a boat tour in the moat and enjoy going under the pink petals.

Toji Temple is home to Japan’s tallest wooden five-storied pagoda, and around 200 gorgeous cherry blossom trees bloom around the grounds nearby, making for a particularly breathtaking scene.

Planted in the northwest area of the Chu-mon gate, a special variety of late-blooming cherry trees called Omuro-zakura create a tasteful atmosphere. The scenery combining the five-story pagoda with blooming cherry blossoms is just exquisite, making it an official national site of scenic beauty and earning it a place among the 100 best sakura viewing points in Japan.

Known for its gorgeous weeping cherry blossoms, Yoshimine-dera Temple was founded in 1029 and is located in Kyoto’s western mountains.

Mount Yoshino is a well-known spot for cherry blossoms, with some 30,000 white wild cherry trees neatly planted across the mountain valley and ridge, making for a breathtaking sight in spring.

Why is cherry blossom season so important in Japan?

Viewing cherry blossoms has been a national pastime since the 8th century. There are many species of cherry, some of which have been cultivated through cross-breeding. These efforts took off in the 14th century where they became cultivated as ornamental flowers.

But why is Japan so fascinated with the sakura phenomenon since centuries ago? Cherry blossom trees have many meanings to the Japanese. A lot has to do with the very brief life of the flowers, blooming only for about a week to ten days.

Their fleeting beauty illustrates all too perfectly that nothing in this world is permanent, everything passes away at some point. A sad but beautiful admiration for this impermanence has been an important part of the Japanese mindset since ancient times. In Japanese, it’s called “mono no aware.” This mindset can be found in the smallest things of Japanese daily life.

Does Japan have cherry blossom festivals?

The act of appreciating cherry blossoms is called “hanami” - literally “flower viewing.” These outdoor parties are carefully planned, as the cherry blossom season doesn't last very long - once they start blooming they only last up to a few weeks.

Many people rely on the blossom forecast known as the “sakura-zensen.” Across Japan, sakura trees blossom at different times. Generally, the first flowers to open are in the southwest, where temperatures are typically warmer, while the last sakura to bloom are in the colder northern areas.

Throughout sakura season, particularly on weekends, parks and streets covered in cherry blossom trees get completely filled with people having their annual hanami picnic.

Hanami can last an entire day and even into the evening, as viewing "yozakura," or "night sakura," is very popular as well, with many places offering illuminated sakura trees.

Can I join hanami events in Japan?

Yes, visitors are welcome to join in and appreciate the sakura magic! Some basic items will be needed in advance. First, you’ll want a waterproof tarp or picnic blanket, which can often be found at a 100 yen shop. (A large plastic garbage bag will suffice as well.) Next, pick up some of your favorite beverages at a convenience store or supermarket - and some sakura-themed bentos or other foods as well. Wet wipes, chopsticks, and a garbage bag are also helpful. Don’t forget to bring your camera and some warmer clothes for when night falls: it can still be brisk in early spring!

Also, while it might still be a little chilly outside, for an outstanding daytime experience, try renting a kimono and strolling around while snapping photos!

VIDEO| Speakin' Japanese - Cherry blossoms are at the full bloom