When and where to enjoy autumn colors in Japan

When and where to enjoy autumn colors in Japan

Autumn in Japan is almost as popular as spring, as visitors can't get enough of the Japanese maple leaves and other vivid fall foliage colors! Plan a trip to Japan between October and December, and you will be absolutely in love with the many beautiful spots for autumn leaves.
The peak season for autumn leaves in Japan varies by region. Check our fall foliage forecast and make the most out of autumn in Japan!

When is fall in Japan? 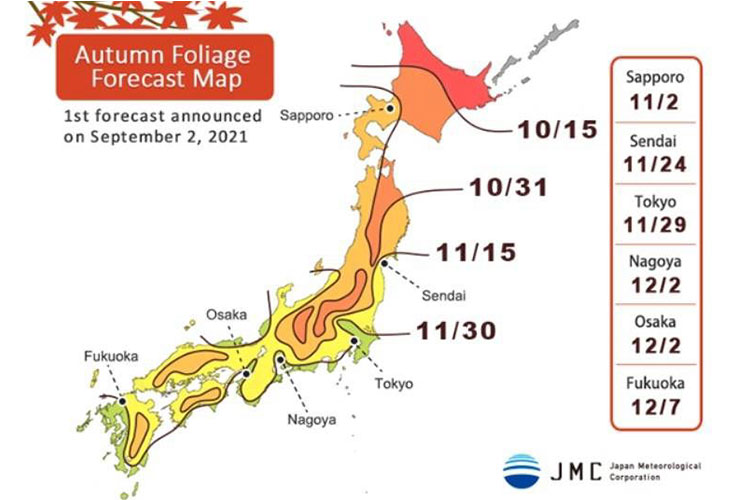 Autumn in Japan is from September to November, and it's one of the best seasons to visit the country for foliage. In some areas, the autumn colors may peak as late as late November/early December. 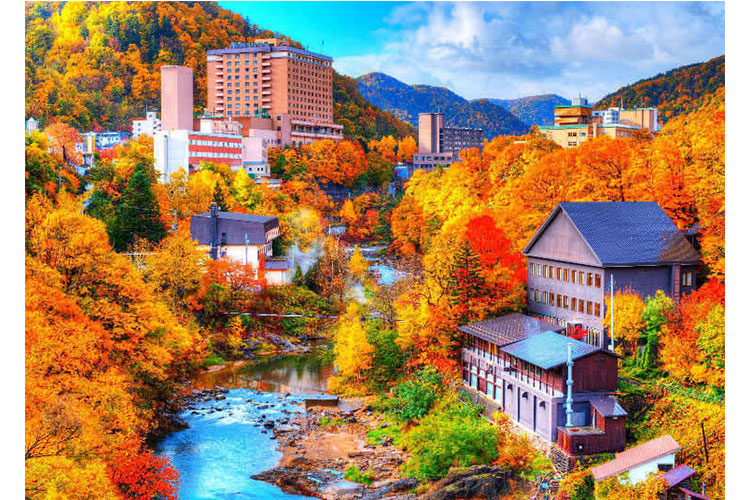 One of Hokkaido’s most iconic autumn leaf spots is Hokkaido University’s Ginkgo Avenue. Situated on the premises of the university, it features 70 trees lining 380 meters of the avenue.

During fall, the road is covered in a golden canopy. Hokkaido is also called the “northern land”. As it is the only area of the country with a subarctic climate, fall foliage in Hokkaido can be admired much earlier compared to the rest of Japan. 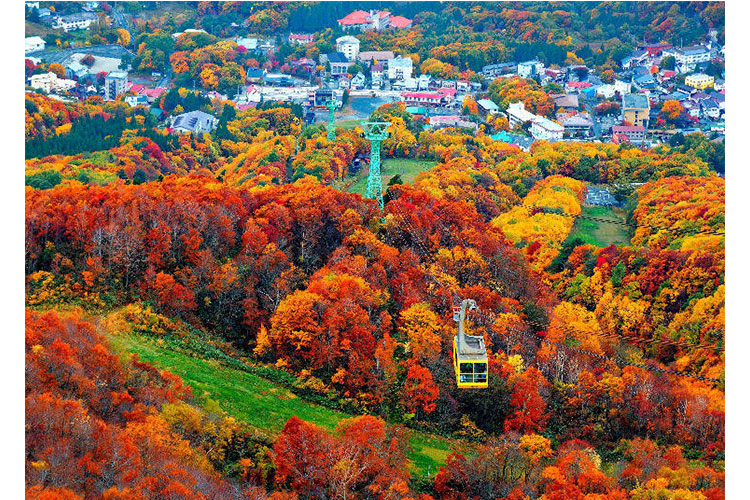 The Tohoku area is in the northern part of Honshu, the largest of Japan’s main islands.
The best time to see autumn leaves in Tohoku is between mid-October and late November, relatively early compared to fall foliage in Japan, just like Hokkaido.
Tohoku is rich in beautiful foliage spots such as Naruko Valley in Miyagi Prefecture’s Osaki City. It takes about 10 minutes by car from Naruko Onsen Station and once there, indulge in stunning scenery with wild cliffs that are 100 meters high and stretch on for 2.5 kilometers. During fall, the entire valley shines in vivid red, gold, and orange.

Peak Time for Autumn Colors in Tohoku
November 10 to November 30 (places with high altitude such as the Zao Mountain range: early to mid-October) 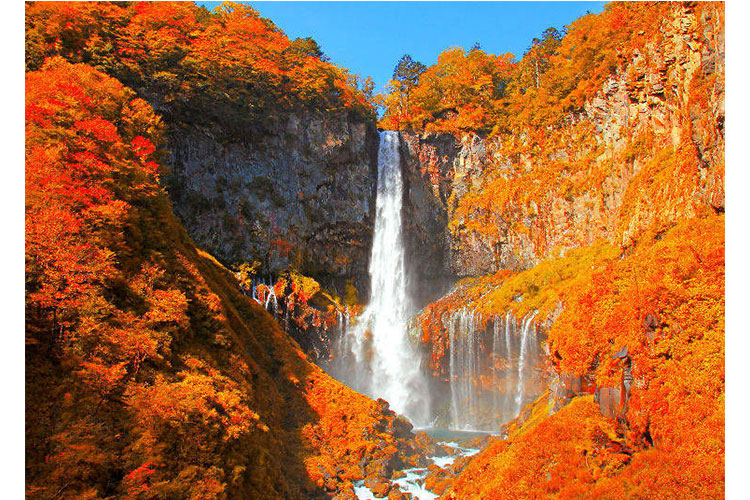 The Kanto area offers a plethora of popular autumn leaf spots. The Nikkō area and the golden ginkgo avenue in Meijijingū Gaien (Meiji Shrine Outer Garden) are especially famous, while the colorful trees of the Hakone Museum of Art are particularly popular while also relatively devoid of the crowds.
For fall foliage in Japan, it's important to note that Japanese gardens are also amazingly tranquil spots to savor the vivid colors of autumn. While peak time varies from spot to spot, this year seems to be late November to mid-December.

4. Hokuriku: When to see autumn leaves 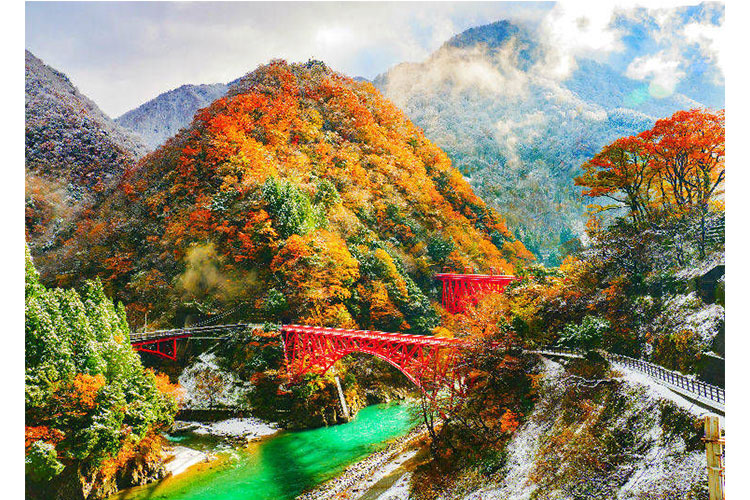 The Hokuriku area stretches over central and northern Honshu and is known for an abundance of high mountain ranges and Japan’s heaviest snowfall.
The best time to see autumn leaves in Hokuriku is in mid-November. But if you’re planning a trip, take into account that some spots might be earlier.
Hokuriku’s most iconic autumn spot is Kenroku-en in Kanazawa City, Ishikawa Prefecture. It’s a special scenic spot that is also part of Japan’s Three Great Gardens and exceptionally beautiful in every season, but autumn stands out among them all. The vivid trees are lit up after sunset, creating a fantastical atmosphere sure to enchant.

Peak Time for Autumn Colors in Hokuriku
November 10 to November 20 (places with high altitude such as Tateyama: mid- to late October) 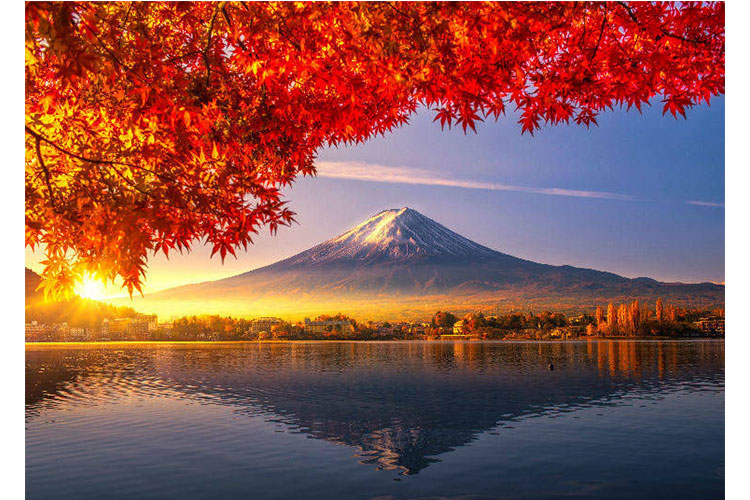 The Chubu region is the home of Mount Fuji, Japan’s highest mountain. Of course, there are plenty of spots boasting beautiful autumn colors not only at Mount Fuji itself but also in the Fuji Five Lakes area. The most popular of these lakes is Lake Kawaguchi.
Every November, there’s the “Autumn Leaves Festival” on its northern shores and an absolute must-see is the “Momiji Corridor,” offering a stunning scenery of Mount Fuji and fall foliage in one picture. It’s a sight often portrayed on postcards and tourist websites, so seeing it for yourself will certainly be a highlight of your trip. 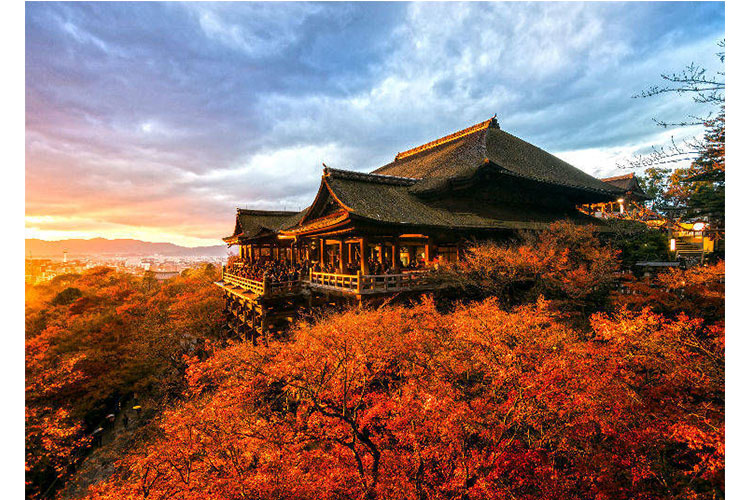 The Kansai region is the home of major, historic cities including Kyoto and Osaka. For fall foliage in Japan, Kyoto is incredibly famous for its stunning autumn scenery, combining traditional Japanese buildings with autumn colors at spots such as Daihonzan and Enkō-ji Temple.
Metasequoia Namiki Avenue is another spot has gained quite a reputation thanks to a TV drama that became a national hit. Located in Takashima City in Shiga Prefecture, it features about 500 metasequoia trees lining both sides of a road of about 2.4km, boasting breathtaking colors during autumn. It impressed so many people, it was chosen as one Japan’s “New 100 Scenic Avenues.” 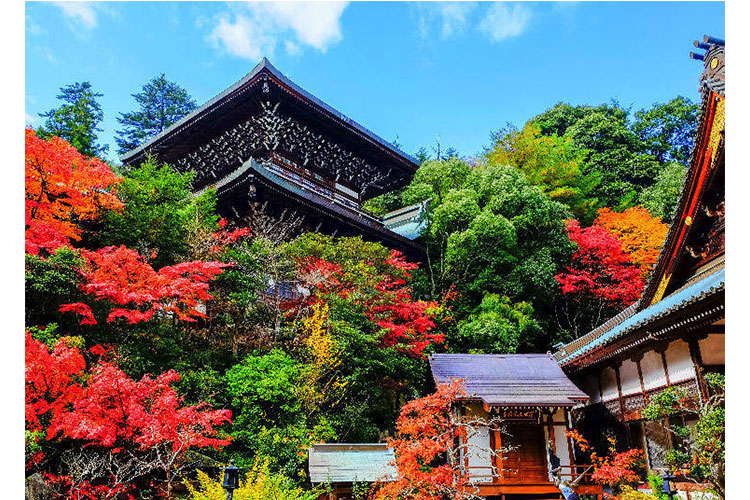 Chugoku is in the western part of Honshu and is made up of five prefectures, including Hiroshima and Okayama. Momijidani Park is one of the most representative autumn spots of the area, located on the famous Miyajima Island (officially called Itsukushima) in Hiroshima Prefecture. Here, numerous Japanese maple trees dip the park into a vivid red, making it almost seem like the branches are on fire.
Among popular places for fall foliage in Japan, Miyajima is most famous for the large torii gate standing in the water and its many historic buildings keep fascinating people from all around the world. It’s a stunning destination for a day trip, offering one of Japan’s most iconic spots dressed in autumn colors. 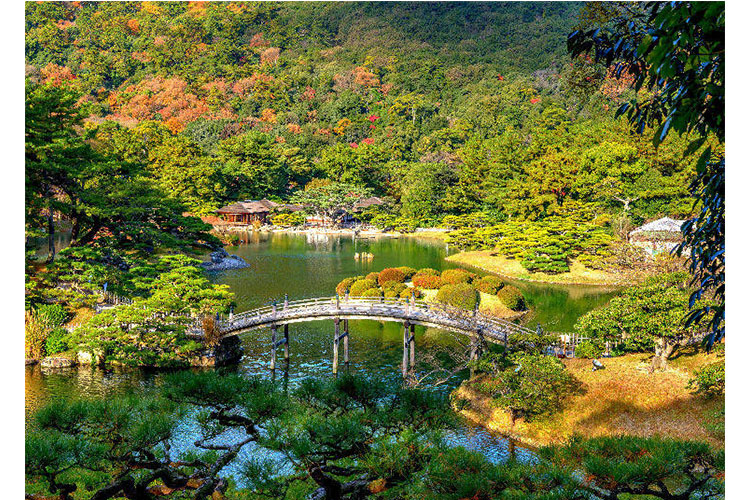 Shikoku in southwestern Honshu is a fascinating place full of lush, untouched nature. Especially Kankakei in Kagawa Prefecture is famous for its autumn colors. It is also one of Japan’s Three Beautiful Valleys, covered in vivid foliage during fall.
In 2015, the valley’s ropeway was renewed and offers a mesmerizing panorama of the entire area. Furthermore, Shikoku is dotted with several other noteworthy places for fall foliage in Japan, including Iya Valley in Tokushima and Nametoko Gorge in Ehime. Those are particularly recommended for sightseeing in autumn!

Peak Time for Autumn Colors in Shikoku
Around November 30 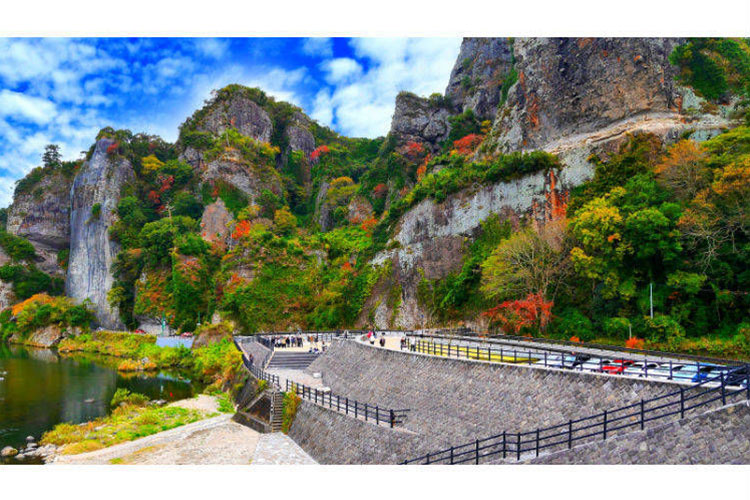 Kyushu’s climate is relatively temperate, gaining popularity as a resort area. Yabakei in Oita’s Nakatsu City is one of the area’s many colorful autumn leaf spots all around the area.
There’s a pleasant promenade that leads you through the gorge, so make the most out of this beautiful natural spot by taking a leisurely autumn walk. The vivid trees of Yabakei are lit up after dark, dipping the entire scenery in an enigmatic glow. Our warmest recommendation is to enjoy the sunset at Yabakei and watch it transform from light to dark.