Editor's note: With whale watching season open, we thought you would enjoy Stripes’ own Shoji Kudaka retelling his story about searching for some of the world’s largest mammals off the coast of Okinawa.

Whale watching is a fun and exhilarating thing to do. Many people likely would agree with that. I knew for me though, a few hours out at sea aboard a boat would be a big test. Having never been a good swimmer, an extended time on the water made me nervous.

So when I finally went on a whale watching tour for the first time in my life, I had a jittery feeling just like most other days at sea. As a reporter, whale watching was something I wanted to try, but it was also something that made me uneasy.

On this day, the weather was far from ideal. The cold snap that blanketed Japan over the last couple of days still left a chill in the air. It was a cloudy, windy and cold winter day in Okinawa. 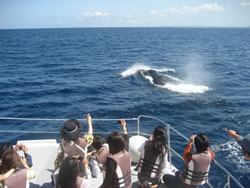 As soon as the double-hulled sailing boat I was on departed from Migusuku port in Naha city around 1:30 p.m., I was baptized by the choppy wintery sea. High waves came one after another, turning the boat into a mechanical bull at sea. Around 30 passengers on the boat screamed in excitement like kids on a roller coaster. The exhilaration of my fellow passengers helped me relax a little for the time being.

“Keep up the good mood folks, you’re gonna need it,” said a tour guide, whose words were proven right not long after.

Thirty minutes later, the excitement subsided, and the waves had a different effect on the passengers. Some were lulled into sleep, while others were dreamily looking at the ocean or rainbows that hung over the horizon. It was a time for patience. With the boat continuing to be shaken wildly, we were requested to remain seated, not able to move around freely. I sat still, hunching my back and resting my chin on the life vest I had on. The guide explained that the whales are coming late this season, so there’s a slight chance of us not getting to see one. I became a little anxious. But I waited with trust in the crews doing their best to find whales, sailing further than they had planned. The strong wind and high waves brought back some of the bad memories I had at sea, and made me feel a little sick, but I managed to hold on. 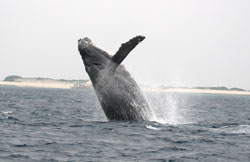 Almost two hours into the tour, the guide finally said, “Folks, we found Humpback whales.” Those five words instantly brought back energy to the crowd. Along with other passengers, I hurried up a ladder and positioned myself on the second deck. I aimed my camera at the ocean to the left and it became a photo shooting competition. The guide let us know clock positions of the whales before the boat changed its direction to give us a clean view of the whales.

It didn’t take me long to find the first whale. A splash rose exactly in the direction the guide suggested. A curved black object surfaced and a heart-shaped tail fin followed, just like I imagined it would look. My heart soared and I clicked the shutter as fast as I could.

On this day, the whale didn’t seem to be in a mood for any flashy moves like a “Spy Hop” or “Breach.” As if to keep us in suspense, the black mammal went deep into the water and did not surface again for 20 minutes or so. Although we encountered whales three times during our almost one hour shooting session, all of them seemed on the shy side. Maybe it’s because of the high waves and cold temperature. Or it could be the way I clicked away the shutter. 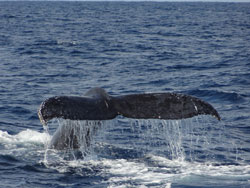 Whales are known for superb hearing capabilities. Plus, according to the tour guide, male whales sing songs to female whales to ask for love, and the success depends on whether or not the female whales like the songs. The whales come to Okinawa for mating, so my shutter noise might have turned female whales off or ruined the mood.

On our way back, as I was giving a thought to some images that I could have taken if the whale had come a little closer to the boat, I felt something sour came up my throat. Next thing I knew, I could sense the blueberry jelly sandwich I had for breakfast getting ready to exit my body.

The best I could do was to hold on to a black plastic bag that a guide handed me. The stomach churning did not end until the boat got back to the port shortly before 6 p.m. Another day at sea had ended roughly for me, but I was thankful that the sea sickness held off until after I had witnessed the mammoth whale.

Three days later, the sea sickness still had me feeling out of balance. I was still feeling the effects, while the whales were probably still singing and looking for love at sea. 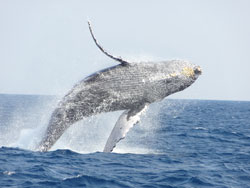 Humpback whales migrate from Russia to the waters west of Okinawa for reproduction between late December and early April. The waters around Kerama islands are one of the most notable locations for a whale watching tour.

Ship crews look for whales by sight. No device or equipment are used, because using such tools would scare them off. Boats share information with each other. If one boat finds a whale, it will let other boats know.

It is recommend to take precautions if you are concerned about sea sickness. On the boat, looking at far, having conversation with others, taking a nap, are referred to as recommended measures. And personally, taking medication for motion sickness is probably a good idea.

*For this article, I joined a tour offered by “Total Marine Sports News”, a company whose whale watching tours are based at Naha. Their contact info is as follows. Tel:098-891-9090, Website: http://www.tms-news.jp *Brochures are available in English.

For more info and tour options, please check out the below websites.

Whale Watching by Kadena ITT
Date: Every Saturday and Sunday in February
Time: To be announced.
Fees: $50 (adult, 13 years old and above), $35 (ages 4-12)
For more info, check out Kadena ITT at https://kadenafss.com/itt-travel/

Asiana flights from Busan to Okinawa will stop Aug. 23

VIDEO| Experience the relaxed side of Kin Town