Visiting the Real-Life School from K-On!!

After a long weekend traveling, I stopped on my way back to Sasebo, for a break to get some country air and check out some old architecture. I ended up in Toyosato, Shiga Prefecture, to see the former Toyosato Elementary School. It was constructed in 1937 and stands as an interesting specimen of educational architecture from that time.

Or, for the rest of the audience: I traveled to the middle of nowhere to see the real life school from the anime “K-On!!” (But, I really did go for the architecture.) 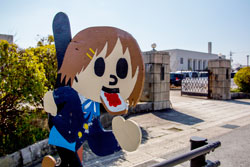 For those who also just came for the architecture and are unaware, K-On!! is a decade-old anime about a high school light music club that does a lot of nothing and is the reason the entire ‘cute girls doing cute things’ genre exists.

The school was built in 1937 with donations from a local merchant and Toyosato graduate, Tetsujiro Furukawa. He sank 600,000 yen, two-thirds of his personal fortune, into funding a modern steel-reinforced concrete school for his hometown. William Merrell Vories was hired to do the job.

Vories had an interesting background himself, being a former American-turned-naturalized Japanese citizen who came to the country as a teacher and made a living as an architect to support his evangelical work. A respectable professional, his architecture can be seen around the Kansai area and includes homes, schools, churches, department stores, a post office and even a sanitarium.

The result is a school that ably served the community for more than six decades. After decommissioning, it was renovated and parts converted to the city public library, a daycare center and the tourism office. The large auditorium is still rented out and on the day I visited, it was unavailable.  The current elementary school was using it for music practice, which included loudly singing and dancing to anime songs. 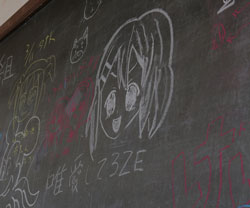 With the renovation less than a decade old, the old school is still vibrant, grime-free, and its grounds well-kept. Walking up to the main entrance I noticed the bust of Furukawa off to the side. It made me smile because I knew that before leaving I’d get a shot of my well-traveled hat on its head.

I arrived around 9:30 a.m. and there was no one around beside an elderly man who just smiled at me as I walked in. I’d read online that it could get rather busy and I hate people in my shots so I made seeing the anime’s club room while it was empty my first priority.

I’d never seen a map for the school and didn’t actually know where the club room was, but I saw a brass tortoise and hare (“usakame”) at the bottom of the central stairwell and let intuition take over. I removed my shoes at the entrance and had to wear those awkward Japanese slippers that never stay on, but managed to quickly get up three flights of stairs with wood worn smooth as glass, to what I assumed might be the entrance to the school’s most famous room.

I peeked in the door’s window. Tea and cake had been set at the desk that had been pushed together near the back of the room and an old cassette deck sat alone on a bench. I wasn’t sure if I could go in because the door was closed, but it was unlocked. So, I gingerly took hold of the rickety brass door knob (I was honestly afraid of handling the door knobs in this building because I didn’t want one falling off in my hand) and let myself in. I came for the architecture, but that didn’t mean I wasn’t looking forward to this as well. 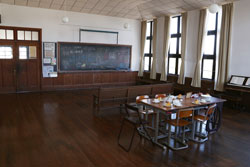 For sixty years this may have been just a meeting room adjacent to the actual music room, but it’s the Sakuragaoka High School Light Music Club Room now. It is kept as a real life anime location, with all the props in place and little details here and there, though with fan concessions like the paraphernalia and the blackboard whose drawings and writing are updated daily. A pile of guest books and photo books to the side show the daily changes in the blackboard from years ago. It’s silly and a bit absurd that it exists, but maybe that’s why it was fun to visit.

After walking around, spotting amusing episode references and getting pictures of it all, I left my otaku nerdiness in the club room to indulge my non-otaku nerdiness and love of old buildings. My wife has informed me that it is still being an otaku either way.

The layout of modern schools hasn’t changed since this one was built, but old places differ in the details. Everything is framed in beautiful, well-worn wood, the door handles are brass and Vories’ little flourishes in design, like the stairwell has usakame are all around.

There’s a music room with drums and organs up by the club room and several empty second floor rooms have been maintained as what they were- science room, geography, etc. but only a plain homeroom was kept more or less as it was in 1937. 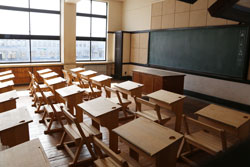 The last part of the school to visit was the Shutoku Memorial Hall, the current gift shop. I loved this room because it was very Art Deco from the light fixtures to the balconies. A few anime fans were banging out drawings at one of the tables and a tobidashi dragon maid was propped up in the corner. The back room is an actual K-On!! shrine, complete with those little wooden shrine charms, probably made of all the stuff fans have left behind. Lots of merchandise, but also lots of fan art.

When visiting, I recommend stopping by the gift shop (building on the left when facing the main entrance) first because it has free Toyosato English-language maps, which show local points of interest and have a map of the school inside. 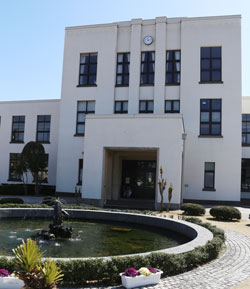 Outside the school, Toyosato has embraced its anime notoriety and has incorporated it into the landscape. Tobidashi, wooden ‘child crossing’ warnings shaped like kids, mostly look like anime characters and light post banners bear the town’s name stylized in K-On!! font. I also noticed posters everywhere, bakeries, stationery shops, men’s suit stores, and sake breweries alike, for ‘birthday parties’ held on character birthdays that the former school has held every year since 2011. To me, these things didn’t clash with the town’s atmosphere but adds a little quirkiness to it.

Also, if you want to visit and not have your experience ruined by a thousand anime fans or conversely, you want to attend one of the ‘birthday parties’ and not get left out because you didn’t pre-register, check out the Toyosato Teatime website.

Before anime fame, Toyosato had its Edo heritage going for it to bring in visitors. Toyosato is on the Nakasendo, the central road from Kyoto to Edo. This was an extremely important artery for moving daimyos and their entourages between their domains and the capital and so well-off Ohmi merchants, such as the Furukawa family, who also plied this route came from Toyosato. Today, there are two museums dedicated to this time period, the Ito Chubei and Yutaka museums, both of which are inside old merchant houses and display artifacts from the era. The school itself is on the Nakasendo, so just exit the front gate, turn left and walk straight until you get to the museums. 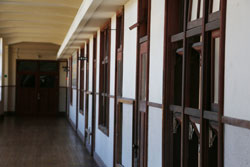 Unfortunately, it was Monday and both were closed. Undeterred, I made the even longer walk through town and field and across the river to reach the Okamura Honke sake brewery to sample the local flavor. There wasn’t much to the walk, and that was kind of nice. It was a blue sky day and the narrow streets and rows of very traditional looking houses gave it a pleasant atmosphere. The lunchtime loud speaker song is even “Moon River;” how much more laid back does it get than that?

By the time I returned to the station platform with a few souvenirs from the school and brewery, I’d had a pretty fulfilling day out in an interesting small town that was relaxing.

Matsuyama a hidden gem in Japan