by Nano Betts
TRAVELWITHNANOB.COM
Email
Print
Reddit
Tweet
Share
Pinterest
More
I can shamelessly admit that up to this day (and I’m 4 days short of becoming 33) I still passionately love animated movies. I make sure to watch all the major screenings that come out, whether it is by Pixar, Dream Works or Disney Studios (Coco was my latest favorite!). Hence, it will come to no surprise that while learning about Japan and its rich modern culture, I was engulfed by the magical world created by Studio Ghibli, Japan’s leading animation film studio. 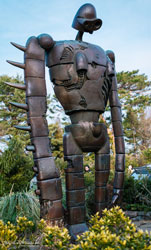 It didn’t take me long to learn that Hayao Miyazaki, the co-founder and creative mastermind behind Studio Ghibli, has created numerous feature-length films which have revolutionized Japanese anime industry and turned into some of the world’s most beloved animated films. I had my homework cut out for me as I spent quite a few “movie nights” watching the classics like My Neighbor Totoro, Princess Mononoke, and Spirited Away among others. They have been providing nothing but a magical introduction to Japan through their beautiful and evocative imagery.
For context, what sets Studio Ghibli’s movies apart is that they place as much emphasis on creating the background, spending a lot of time developing the mood and details of the world the characters live in, as they do on the action elements in the foreground. Miyazaki aimed to create these lush and fantastical worlds with such intricate detail that it would seem real to any viewer. More often than not, Miyazaki drew inspiration from the natural beauty of Japan. That’s why there are certain places around the country which can be easily recognized based on the movies, like Dogo Onsen in Shikoku.
If you’re a hard-core fan or have at least the slightest interest in Japanese animated movies, a visit to Studio Ghibli Museum in Tokyo is a must. With some serious advance planning, I finally managed to book the tickets. Bordering with two serine neighborhoods of Mitaka and Kichijoji, the museum is dedicated to the studio’s work and provides an invaluable insight into the mechanics of mysterious yet fascinating world of animation.
Imagine visiting a mini-version of the Disney World, only the Ghibli Museum acts as a portal to a storybook world transporting you to the imaginary universe created by Miyazaki. You peruse the whimsically designed multi-storied mansion full of twists and turns, tiny doors, winding staircases, and a rooftop garden.
There is quite a lot to explore and take in. We started at the delightful miniature theater, which shows an animated film created exclusively for the Ghibli Museum and is only viewable here. I also greatly enjoyed the main exhibition hall where you can learn about the history and technique of animation as demonstrated by over-sized and intricate mechanical contraptions. Although, my two favorite exhibits were a full replica of Miyazaki’s office and a temporary display dedicated to all the foods featured in Ghibli movies! It legitimately made me hungry (see my stories on Instagram for more visuals). The museum also has a lovely cafe, children’s play area, a rooftop garden and a gift shop where I ended up spending more than I care to admit.
Making Reservation & Buying Tickets for Studio Ghibli Museum

Contrary to common belief, buying tickets for Studio Ghibli Museum is not hard, but making reservation needs advanced planning. Beware, Studio Ghibli Museum tickets sell out in a heartbeat, so you need to plan your visit ahead of time. While you have an option to buy tickets at Lawson or your local JTB office (the latter needs to be done 3 months in advance!), I highly encourage you to order the tickets online. Determine when you want to visit. Make sure to check the Ghibli Museum calendar for closures (which happen at year-end, and irregularly throughout the year for exhibit changes). The museum is usually closed on Tuesdays, and open from 10:00 am to 6:00 pm on other days. Afterward, go to this official Studio Ghibli tickets sale website to book the tickets. The sale for the following month opens on the 10th of the previous month (tickets for May are sold on April 10) at 10:00 a.m. sharp. It is important to time the purchase properly because the tickets are sold out within hours. Booking the ticket was effortless: you pick a day and time of your visit and then pay by credit card. After that, you will receive an online confirmation which you must print and bring to the museum with you. They will exchange it for the actual ticket, which by the way comes in the form of a real film from the outtakes that never came out!
If for whatever reason you don’t get a chance to visit the museum itself, there are a number of spots in Tokyo where you can get your fix of Studio Ghibli animation and immerse yourself in the enchanting world of their films. Here are a few spots I’d recommend visiting:
- Shirohige Cream Puff Factory where you can savor some delectable cream puffs in the shape of tottoro! Bonus: it is located in Shimokitazawa, a hip and trendy neighborhood in Tokyo that is so much fun to explore.
- The Nittele Giant Clock designed by Miyazaki himself and sculpted by Shachimaru Kunio (the same sculptor who made the robot soldier for the Ghibli Museum).
- Tokyo Open Air Museum which apparently was Miyazaki’s favorite place to visit and get inspired at. The museum has a wide array of preserved everyday buildings from the Edo period.
- Donguri Kyowakoku is a chain of shops dedicated to selling Studio Ghibli merchandise. They have almost 40 branches around Japan one of which is located inside the Tokyo Station on a Character Street.
- It was officially confirmed that a Studio Ghibli Amusement Park will be opening in Japan in 2020.
Getting to Studio Ghibli Museum in Tokyo

The museum is within the bounds of Inokashira Park in Mitaka, on the west side of Tokyo. To get there, take the JR Chuo Line from Shinjuku Station (you’re looking at about 20 minutes). From Mitaka Station, you can either walk to the museum (just follow the signs—it’s a 15-minute stroll), or catch a shuttle bus (¥320 return, ¥210 one way). There’s about one bus every 10 minutes.

Did you know?: Difference between like and love in Japanese