Whether you’re working from home, sheltering in place or just staying home, if you’re like us, you’re probably dreaming of open skies, sandy beaches, tall mountains, or perfect powdery slopes. Our travel plans may be on hold, but that doesn’t mean we can’t dream up where we’ll go next.

Welcome to virtual vacation video series where we can explore destinations from the comfort of our homes.

Join us as we take a short virtual journey to Hanoi, Vietnam’s capital.

The great thing about this destination is that it is easily accessible from anywhere in the Pacific theater and as the capital city, many of Hanoi’s attractions are within walking distance. Enjoy its Western and Eastern influences around every corner. Hanoi is a great place for a quick getaway.

Some of the must-see spots in Hanoi include: 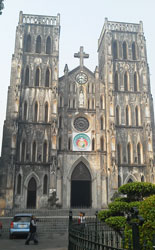 While in Hanoi, don't forget to sample a bowl of pho, one of Vietnamese cuisine’s favorite noodle soup dishes made with chicken broth, rice noodles, fragrant herbs and meat.

I hope you enjoyed a look at Hanoi through my travel photos and that perhaps it's inspired your next trip. Stay safe and get ready to travel with us in our next video. Thanks for watching!

The traditional cultures of Sapa in northwest Vietnam

VIDEO| Enjoy a stroll around Lake Okutama near Yokota