Editor’s note: We are living in uncertain times, so please plan ahead if, and when, you decide to travel. Follow safety guidelines set by your base and always remember to practice proper hand-washing and social distancing.

Nagoya is an easy access point into Japan’s cultural heartland. It is also one which samurai armies fought for over centuries and several aspects of this history are still preserved there to this day. We spent a week in Nagoya City and the surrounding countryside for a look at the castle towns, 20th Century architectural works of art and other wonders this region has to offer.

As it always does, our trip began when we come to Aichi, with two days at Meiji-mura in Inuyama. About 45 minutes from Nagoya, Meiji-mura is an open-air architectural park composed of more than 60 real historic buildings from the late 1800s and early 1900s from all over Japan brought together like a small village to teach about the era. These include everything from famous authors' homes to a hotel designed by Frank Lloyd Wright with interiors made to look as if still in use or converted into a museum with lots of era-relevant information. Like all good parks, Meiji-mura has rides including a real vintage steam engine with cars and a 1910 Kyoto streetcar! We made our time more memorable by spending a day in vintage costume and kimono for photographs. 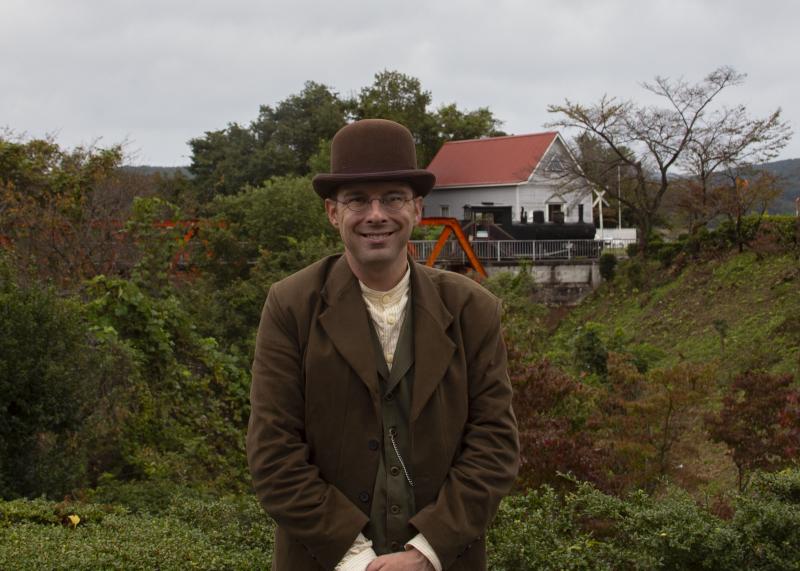 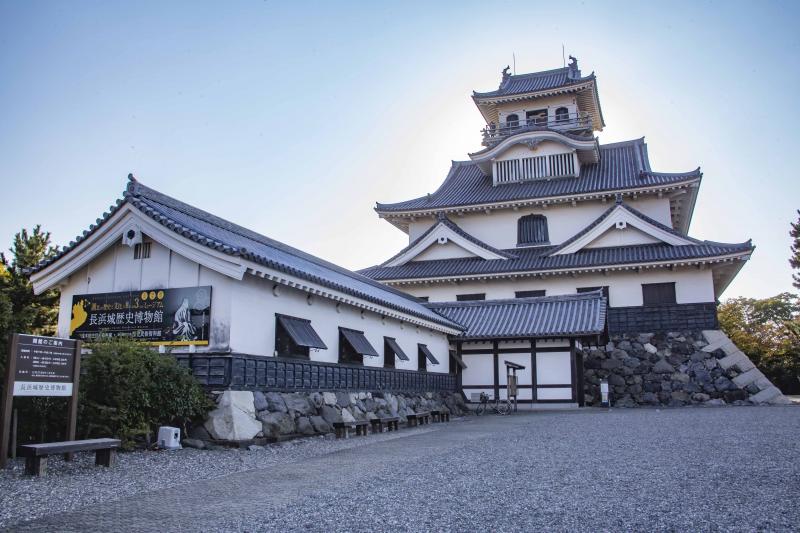 Our stay in Nagahama brought us closer to the remnant of the Warring States Era. Here, the reconstructed castle has helped the town keep ties to its castle town heritage. This was Toyotomi Hideyoshi’s first domain as ruler of Japan, and he, along with Oda Nobunaga and Tokugawa Ieyasu, is credited for uniting Japan. Though the impressive rebuilt castle is the centerpiece of the town, there are many historical buildings and temples from the feudal to modern era to enjoy. We stopped at a Kurakabe Square, a Victorian bank, and the Ando merchant's home, both traditional and artistic, with a nice collection of calligraphy made by a renowned master.

On our way to the old Train Station Museum, we came across a group of Noh mask carvers inside the former Kaichi School, an elementary school from the 19th century. Though they don’t do public demonstrations, they invited us in to watch them carve and explain their craft with us. 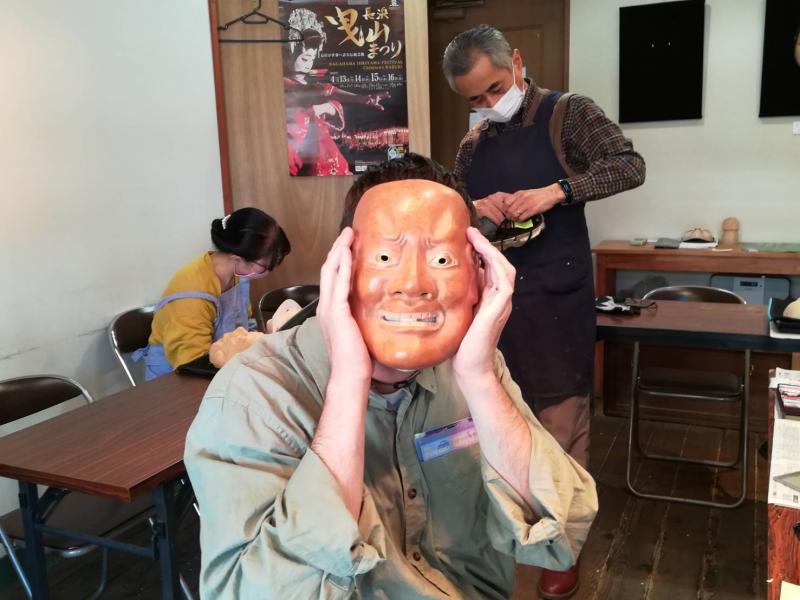 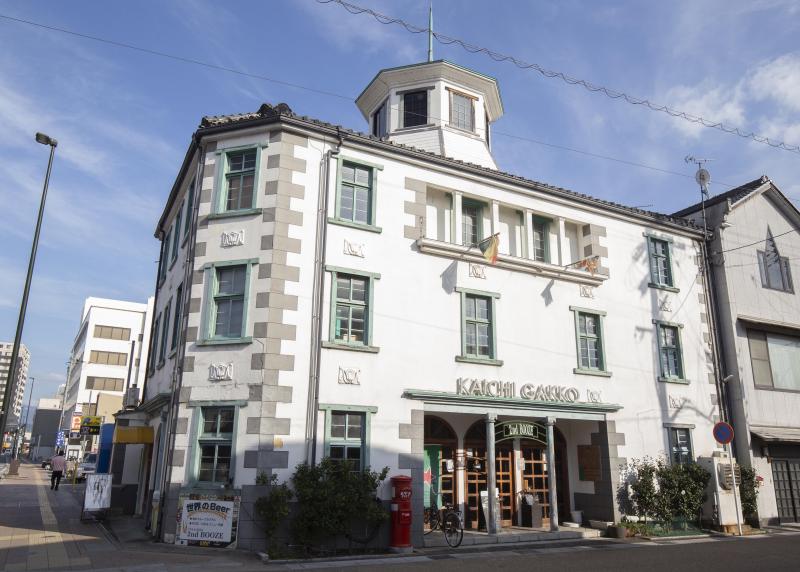 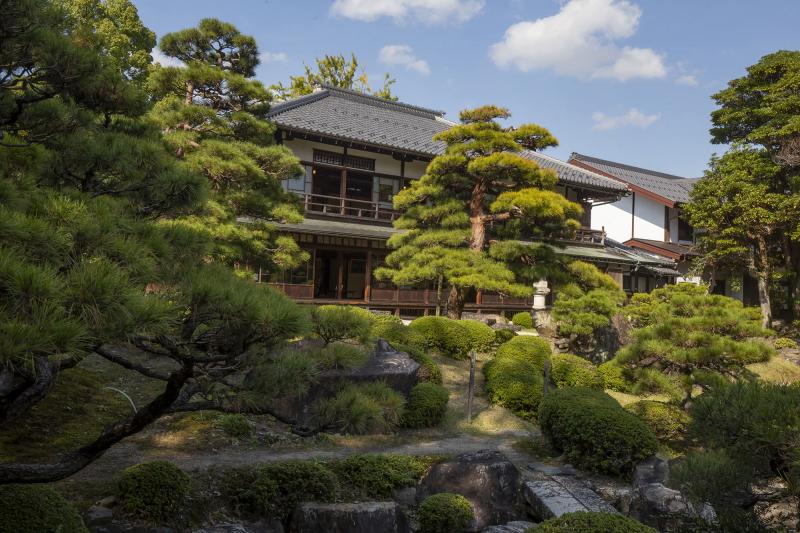 A short way down from the castle town stands Japan's oldest train station, which now serves as a railway museum. This was our chance to walk through a preserved 1880s train station and see a few classic train engines. Across from it is Keiunkan Garden, a tranquil spot that cost a small fortune and was constructed to serve as a place for the Meiji Emperor to rest while waiting an hour to catch his train (Meiji emperor was kind of a big deal). 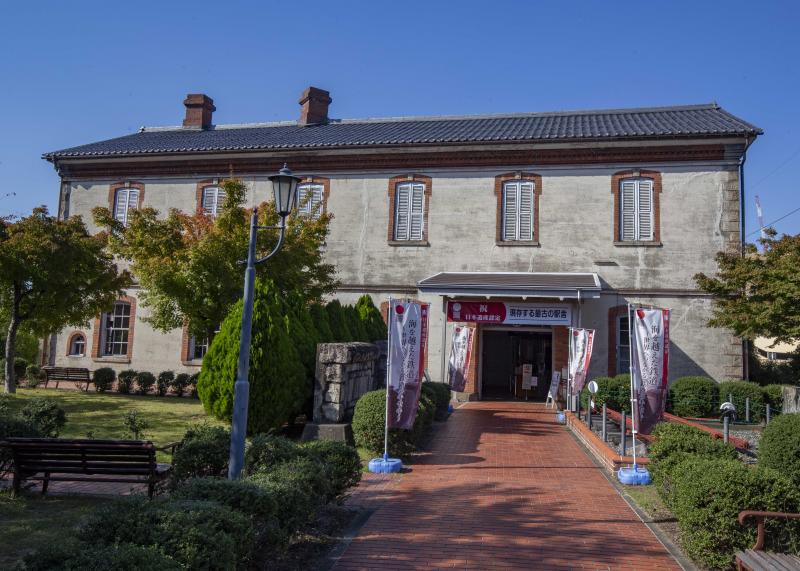 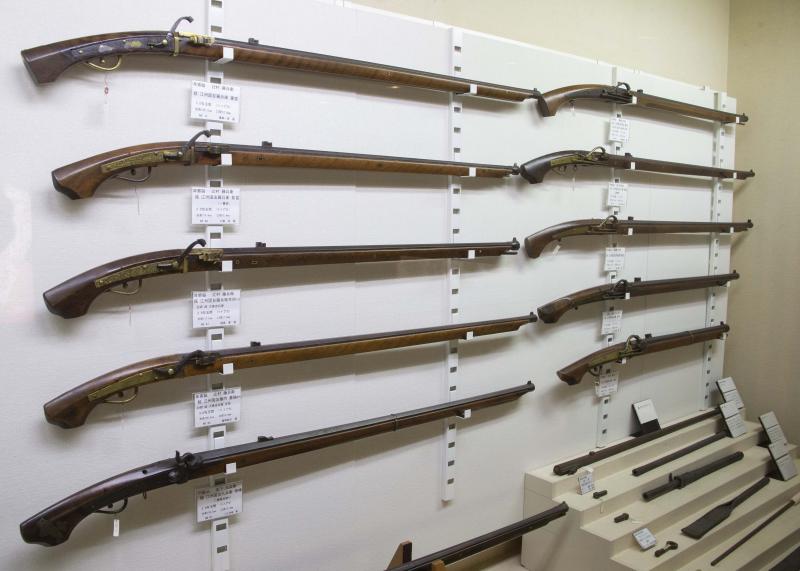 Of all the places we visited, Kunitomo Matchlock Musuem was the only one that required a drive. The city, Kunitomo-cho, was home to a gunsmith enclave during the Warring States and Edo eras and this museum contains the biggest collection of firearms I’ve ever seen in Japan. 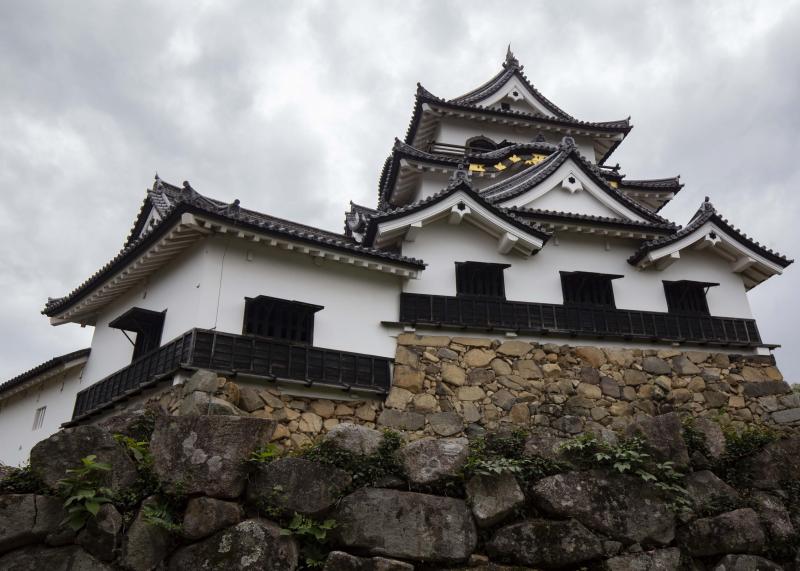 Though Nagahama's rebuilt castle is lovely, Hikone is the real deal! Getting there is about a half-hour train ride and it is worth venturing out to as it is a National Treasure and one of the few remaining original Japanese castles left. Its keep is small but still ringed with walls and towers and surrounded by a moat giving it a sense of scale that most recreations and even surviving castles lack. The castle grounds also house one of Japan’s most beautiful gardens and the castle museum displays the real armor and weapons of Hikone’s daimyo, Ii Naomasa, who fought at Sekigahara. Hikone Castle grounds are an affordable and easy way to take in a bunch of the local history, so it’s a great day trip for anyone wanting to learn more about feudal Japan. 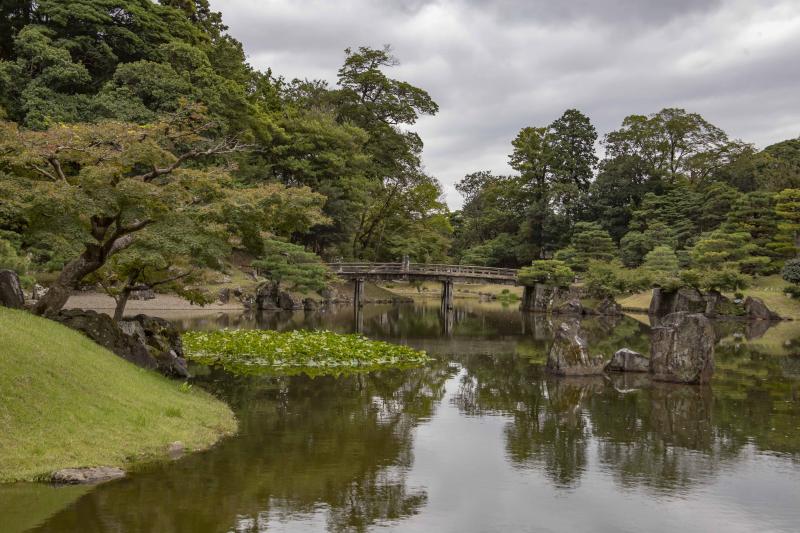 In both Nagahama and Hikone, we stayed at a machiya traditional townhouse. A master of the tea ceremony owned our Hikone machiya and as part of the stay we were able to participate in a tea ceremony practice session. Good machiya maintain the feel of staying in an old Japanese house, sleeping on tatami mat floors in rooms with sliding doors. In my experience, the hosts are always very hospitable and they provide full, seemingly endless meals made from fresh, local produce and meat.

Because of the Go to Travel campaign, the Hikone machiya cost 5580 yen for both of us, including breakfast. Usually the price would have been 6600 yen per person. The campaign discounts are applied automatically without a need to apply. Hikone also had a Go to Hikone travel campaign that gave us free tickets to visit the castle and vouchers for tourism-related activities and shopping, which we received when we checked into the machiya. I’d recommend having a Japanese speaker call to make arrangements or use an online booking site. The two machiya we went to had staff that could speak some English. 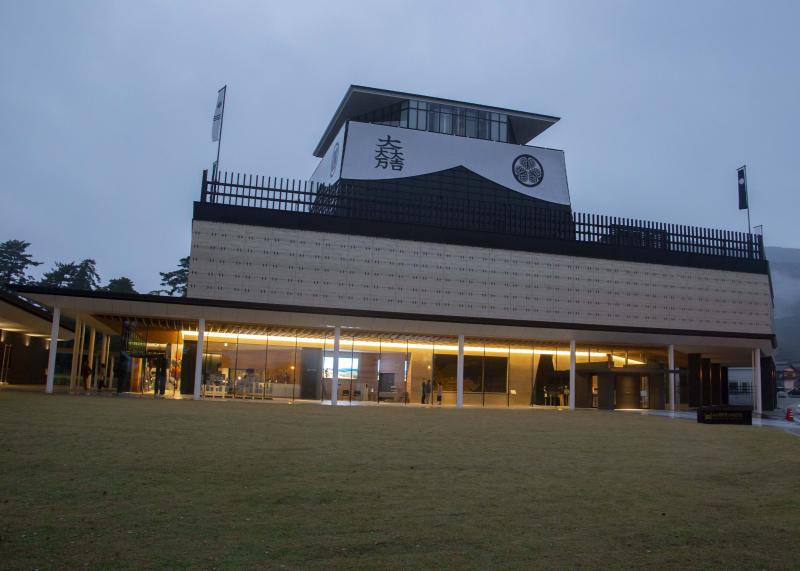 Towards the end of the day, we left Hikone and stopped at Sekigahara. This was the most critical battle in Japanese history as its victor would rule a peaceful Japan for the next two and a half centuries. By sheer luck we visited on opening day for the new Gifu Sekigahara Battlefield Museum. The observatory on the top floor lets visitors survey the rural town and countryside for a look at the different army encampments and how they moved throughout the region. 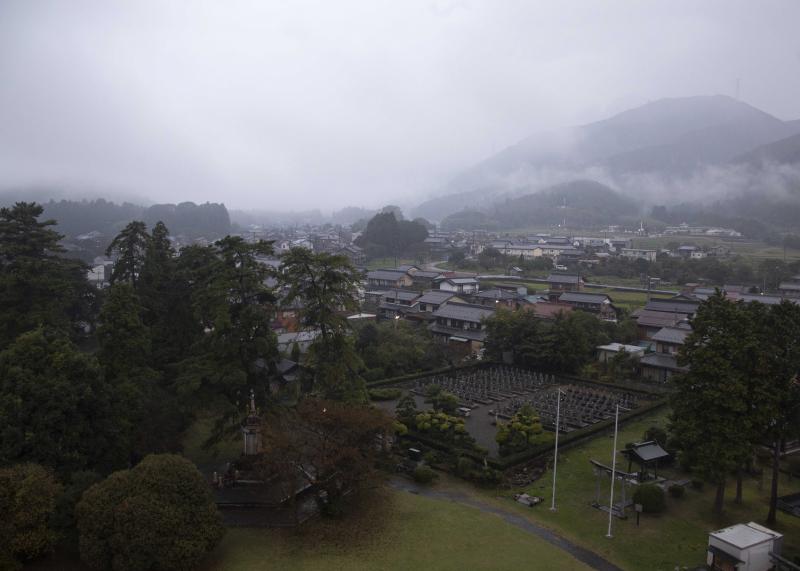 We spent our last night and day before returning to Nagoya in Yoro. This town is one of the country’s true hidden gems as it used to be a getaway for anyone who was anyone from the crown prince to some of Japan’s great literary and artistic figures of the early 20th century. It has since faded from popular memory, but its fabled waters tasted of sake, could cure illness, rejuvenate the old, lead an empress to visit 1300 years ago and name an era after Yoro. Today, it’s a quiet green mountain retreat; affordable and unassuming but still home to beautiful nature and healthy water. The biggest natural attraction is Yoro Falls, one of Japan’s 100 best waterfalls. 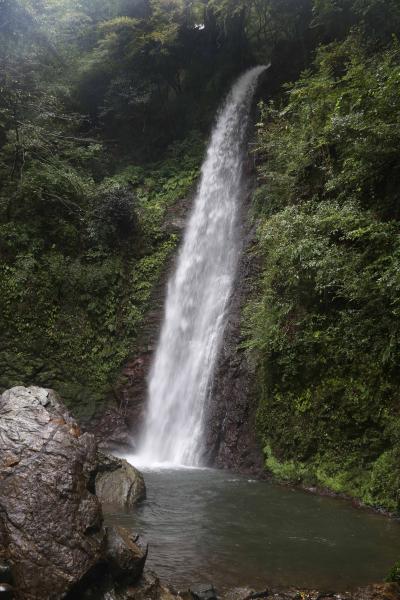 We stayed at Senzairo, a family-owned inn that’s been around since 1764. Though renovated through the years, Senzairo’s current iteration is from 1880, which gives it a very old, yet warm and inviting vibe. We slept in the same room Crown Prince Yoshihito used when he visited in 1910. Despite the big-name guests, Senzairo was only about $140 a night and the Hida beef shabu shabu for dinner was almost too much for us! 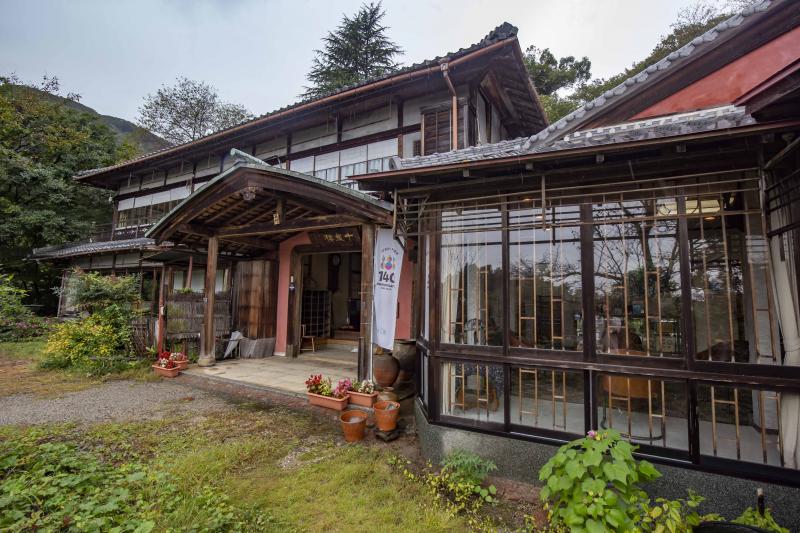 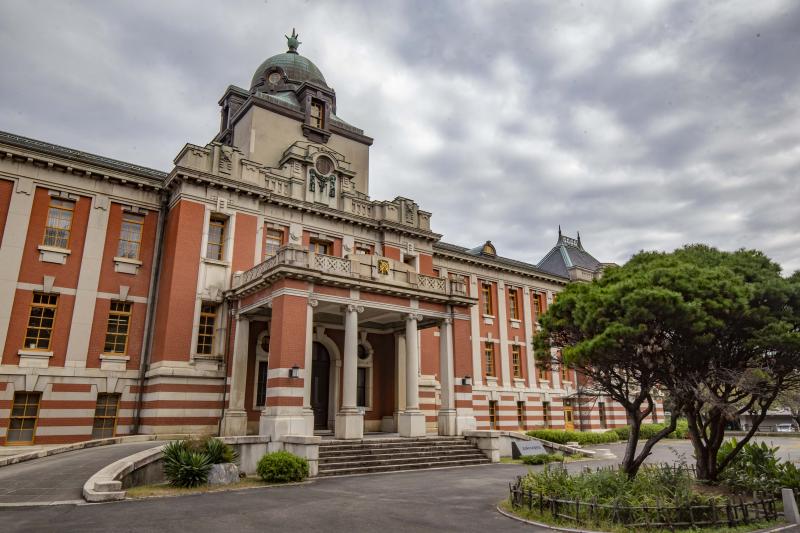 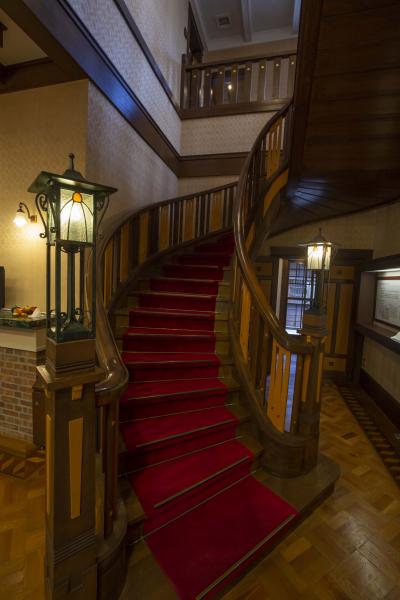 Returning to Nagoya, but not entirely to the current Reiwa Era, we spent our last full day walking the Cultural Path, a collection of historic buildings not far from city hall. There were too many to see, so we visited the City Archives, Shumoku Café, Futabakan and Toyoda Sasuke Residence before capping the day off with a stroll through Tokugawa Gardens. he City Archives is a former courthouse whose early 20th-century artistry would be at home in Washington D.C. Futabakan is a whimsical and colorful home built for Japan’s first modern actress and her lover, “The King of Electricity.” So I guess they were Japan’s first real “Power Couple.” 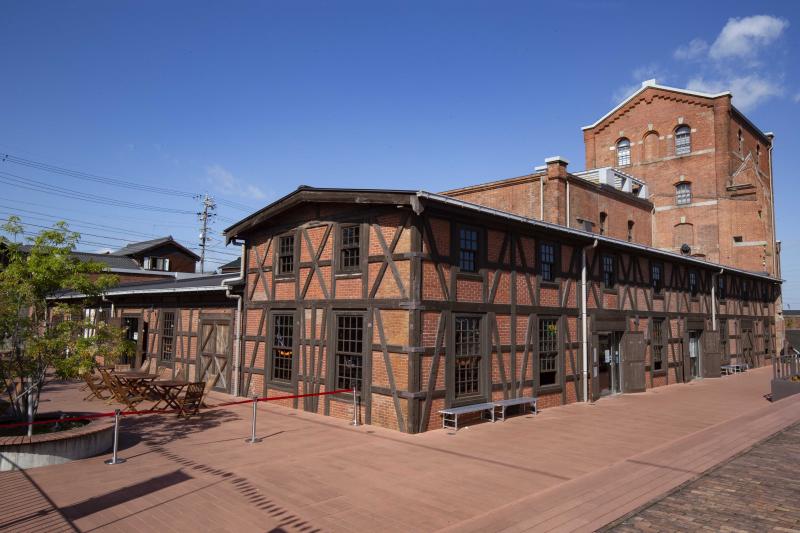 Before flying back to Okinawa, we stopped off in Handa, home of the former Kabuto Beer brewery. The brewery one of the largest Victorian red brick buildings in Japan and is now both a beer museum and restaurant where you can drink recreated 1890s and 1920s style Kabuto Beer.

Getting there and planning ahead

Being able to sample so much varied history made this trip memorable and it never felt boring or repetitive, even seeing castles in consecutive cities. As a historic heartland, the region has so much to offer that it was difficult to decide where to go, but we could make the most of our time with proper planning. Renting a car made travel easy as all of the places we visited were about an hour or less from Nagoya by car.

A benefit of the current Coronavirus situation was the overall lack of crowds and eagerness of the Japanese government to get people traveling again with the Go to Travel campaign. This partial government subsidization of hotel stays was automatically factored into our room costs and every stop handed us campaign coupons we could spend on food and souvenirs. We never encountered an unsafe feeling as the Japanese are always rather mindful of sanitation.

The biggest potential stumbling block were military COVID-19 restrictions; with the prefectures capable of being put off-limits on a moment’s notice, we had to plan and execute this trip in about a week. As soon as travel restrictions were lifted for us Okinawa sailors, I put in leave for Aichi the following day and we were in the prefecture shortly thereafter. This is good because a week after we returned, the prefecture was once again off-limits.

This was our third trip to the area, and we still have so much more to see and do here. I’m looking forward to when another visit to Meiji-mura and all the locations we missed.