As soon as you step outside the bullet train upon arrival to Osaka, you feel a different vibe compared to Tokyo. Here, people are more free-spirited, fun-loving, easy-going and less bothered to abide by the rules. I was a bit shocked to see the sign in the metro which reminded passengers to be vigilant and warned against the pickpockets – a notion I forgot even existed in the safety bubble that is Tokyo. Streets are less groomed, people are louder, the atmosphere is buzzy and there is definitely a verve in the air that is typical of a southern city. Osaka is the third largest city in Japan (after Tokyo and Yokohama) and offers an extensive list of things to see and do. The sprawling city has made its name as a food mecca of Asia, although honestly, I don’t think it is superior in any way to Tokyo by either count or quality of restaurants. But that’s just my personal opinion. I put together a quick guide to Osaka to help plan your visit, listing the top sights as well as the best places to eat in Osaka. 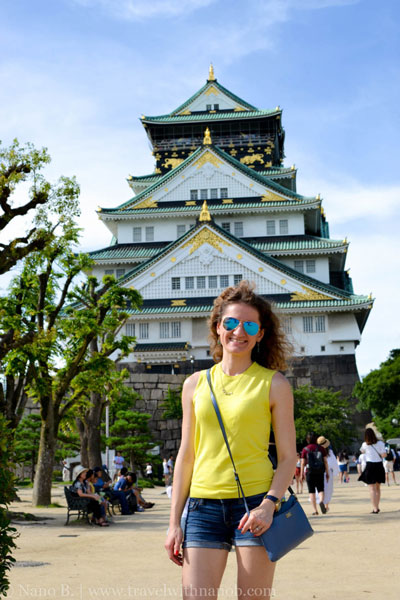 The historical highlight of Osaka is undeniably a beautiful Osaka Castle - perched on top of a hill and surrounded by a moat and beautiful Nishinomaru Garden. The original castle was built in 1583 as a symbol of a new, unified Japan and was the largest castle in country at the time. Sadly, it has been destroyed and rebuilt a few times since then.

While the exterior maintains its original look, the interior has been entirely remodeled into a museum equipped with all the contemporary amenities, which takes away from the experience a bit. Still, it is worth seeing, especially if you won’t have time to visit other castles in Japan. The last floor features an observation deck with a great view of the city. 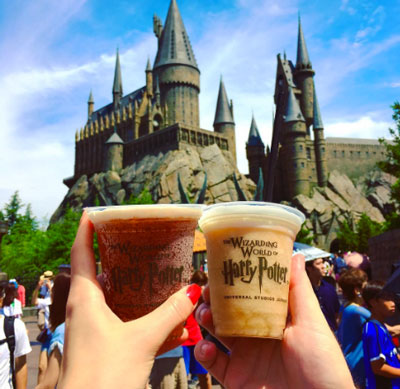 If you are a kid at heart, Hermione or Minion, then heading to Universal Studios will be on your list without me telling you.

Mr. B and I had an absolute blast even though everything was in Japanese.

A few tips:
• Avoid weekends and Japanese holidays, if possible
• Park opens at 8:50 or 9 a.m. depending on the amount of the crowd. We arrived at 8:40 a.m. and purchased tickets on the spot, which was a painless process and took only ten minutes; however, there was already a huge line at the entrance gate well before opening, so I would recommend arriving no later than 9:30 a.m. Ideally a bit earlier so that one person can buy the tickets while other stands at the line by the entrance.
• Harry Potter World is the most famous ride (followed by Jurassic World), so head there first to avoid lines that get longer by the minute. We used one trick that helped us save TONS of time – single liners! 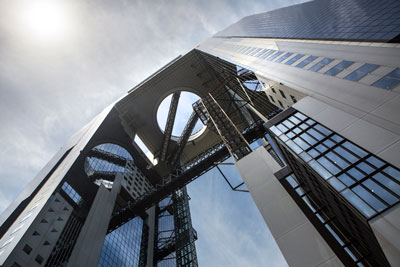 Something that looked incredibly cool, but sadly we didn’t manage to see, is Umeda Sky Building featuring futuristic architecture with Floating Garden Observatory on the 39th floor.

While it is mainly occupied by the offices, the basement hides Takimi-koji restaurant mall, a replica of a Japanese street of the early Showa Period. 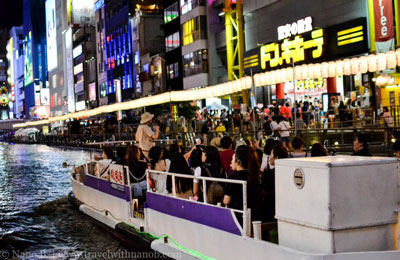 Neon wonderland and the entertainment central of Osaka, this neighborhood is definitely worth seeing for its vibrant atmosphere.

Pedestrian Dotonbori St., which runs along the Dotonbori canal, is lined up with little shops, street food counters and eateries. The place gets particularly crowded at night. Hanging out with friends and a bottle of booze by the retro, yet incredibly well-known Glico Running Man, seems to be ‘a thing’.

Now a symbol of Osaka, this athletic guy has been in this spot for over 70 years and is actually an advertisement for the manufacturer of insanely popular sweet Japanese snack – Pocky pretzel sticks.

You can also take a boat ride along the lantern-lit canal, although we loved just strolling along it, stopping occasionally to people watch and see what makes the local ‘tick’. Well, they certainly know how to party.

There is so much more to do in Namba and Japan Guide (www.japan-guide.com/e/e4001.html) provides great references, like Amerikamura district, Shinsaibashi Shopping Arcade, Den Den Town or quainter Hozenji Yokocho Alley. 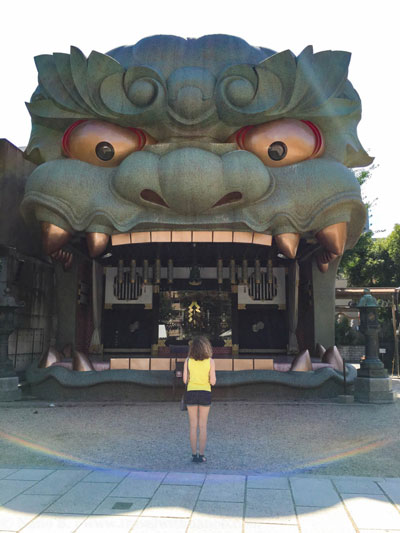 Have you ever visited a place that was so unique and special that you almost didn’t want to share it with anyone, instead keeping it selfishly secret?

That’s how I felt about Namba Yasaka Shrine. But as a good blogger I also want to share it so others can enjoy it the way I did. This tiny little Shinto shrine tucked away in a quiet residential district blew us away.

It was absolutely unexpected and something I have not seen anywhere in Japan. The enormous lion head-shaped Ema-Den is truly eye-catching.

The open mouth of the Shishi-den holds between its teeth a classic performance stage used during various processions and celebrations held at the shrine. 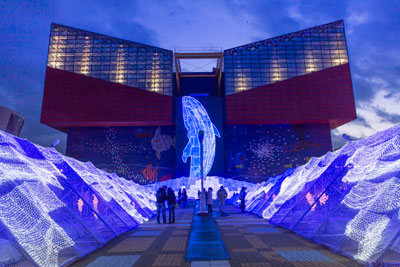 One more thing we didn’t get a chance to see this time is Osaka Aquarium, supposedly one of Japan’s most impressive aquariums and home to a whale shark! 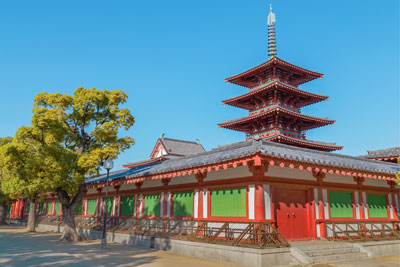 One of Japan’s oldest temples reflects the original 6th century design with a beautiful five-storied pagoda. The temple is also surrounded by the idyllic Gokuraku-jodo Garden.

BEST PLACES TO EAT IN OSAKA

Two days were not nearly enough to make even the slightest dent on the food scene of Osaka, however we had a few memorable meals and I will gladly share my culinary finds. Unlike Tokyo, Osaka boasts an abundance of street food.

One of the most popular things to try is takoyaki, a ball-shaped Japanese snack made of batter filled with diced octopus. You can find little stands selling it everywhere. Another dish that originated in Osaka is okonomiyaki, a.k.a. Japanese pizza, which is basically a savory pancake containing a variety of ingredients like diced cabbage, noodles and other toppings. I also have never seen so many fugu (blowfish) restaurants anywhere else.

However, whoever tried it says the fish has little flavor or taste, so I have never been interested to try it myself. Time permitting, take a stroll along Kumoron Market, which is not as impressive as Kyoto’s Nishiki Market, but still is worth seeing if you want to taste some local flavors and nibble on freshly grilled seafood for affordable prices.

Breakfast or Brunch in Osaka 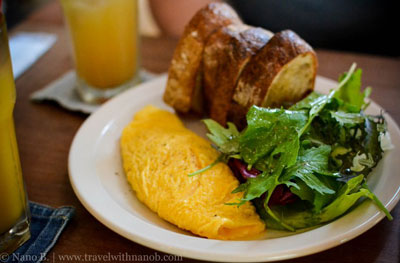 My regular readers know how important breakfast is for me, so the first things I did is looked up the best breakfast spots in Osaka.

One that kept popping up was Westwood Bakers, a small hip café located close to Dotonbori. The atmosphere was welcoming, lively and quite cozy. I loved the exposed concrete walls with wooden, metal and leather accents, plus prevalent American-themed décor and open kitchen.

Although what attracted me even more is a selection of fresh house-baked baked pastries and profound breakfast menu. I thoroughly enjoyed my bacon, egg and arugula sandwich. Egg was beautifully cooked and the bread was super fresh and coated with butter, overall making it a perfect bite.

Meanwhile Mr. B silently inhaled his omelet served with salad and generous number of toasts.  His eggs were of perfect consistency: not too runny yet not overcooked.

We also decided to try strawberry French toasts served with ice-cream and house-made strawberry syrup. Last, but certainly not least, my latte not only looked good, but also tasted damn good. We left a little too full and didn’t get hungry until dinnertime, which was perfect because we had reservation in Kobe. 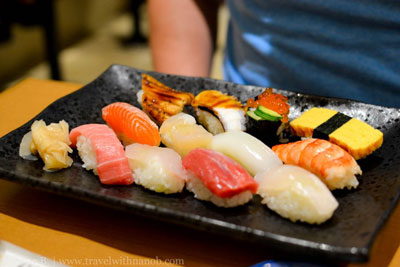 Our Airbnb host highly recommended Sakanaya no Maru Sushi conveniently located in Shin-Osaka station (that’s where shinkansen trains arrive). It is a small restaurant specializing in sushi and was filled with Japanese diners.

We were very warmly welcomed and the waiter kindly provided an English menu. Mr. B opted for a selection of nigiri which he thoroughly enjoyed, while I savored my platter of lean, semi- and fatty tuna which was absolutely delectable. 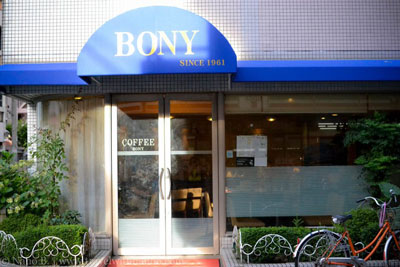 It was blazing hot when we arrived in Osaka and after a day of sightseeing we headed back to our airbnb for a little rest before dinner.

We both felt like having a light pick-me-up that would also energize us a bit. We bumped into this tiny coffee place right on the corner of our street which was not devoid of character.

Bony was almost empty when we entered, with an old man in a wheelchair reading a newspaper by the counter and another couple, probably on a date, enjoying a bit of privacy by the corner table.

Aroma of strong coffee mixed with cigarette smoke fills your nostrils. Retro furniture and old-style yellowish curtains makes you feel you are back in 1960s, when the cafe was first opened.

Obviously, here, nothing has changed much since then. I wondered how many neighborhood gossip has this place filtered and how many interesting stories did these walls keep secret.

We sat on the opposite side of the room and ordered coffee. It might not be the best coffee shop in Osaka, but it was good enough and hit the spot with its ambiance and very welcoming barista. 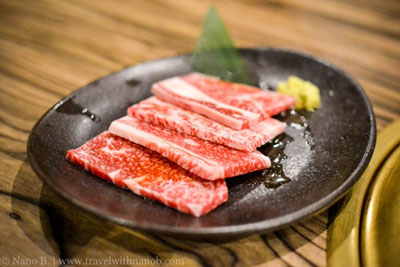 Osaka is a perfect place to enjoy wagyu beef directly from Kobe. For our first night in town we craved yakiniku (grilled meat) and randomly wandered into a place called Gyu-Kaku.

Here, you have an option to order a la carte, or choose all-you-can-eat option which comes with a selection of beef/pork and sides. We ordered a la carte instead and tried a variety of cuts with “premium wagyu ro-su” being the most memorable. I love yakiniku style of dining, it is casual, you eat at your own pace and grilled meat is always so scrumptious and enriched with a smoky flavor.

For those willing to splurge a little and indulge in fine dining, you may try to book a table at Hajime, currently no.82 on World’s Best Restaurants by S. Pellegrino (https://www.finedininglovers.com/tag/50-best-restaurants). We c alled way too late and missed our chance to dine there, but with proper planning hope to make it there next time.

Needless to say, it is absolutely worth hopping onto the train to Kobe for savoring the legendary Kobe wagyu beef.

On hallowed ground: Tuning in to Japan's temple-shrine dichotomy

Did you know?: Japan's Golden Week