Tattoos in Japan: 3 expats share how being inked up affected their lives

Tattoos in Japan: 3 expats share how being inked up affected their lives

Some of the most frequently asked questions by soon-to-be tourists in Japan, are concerning the Japanese perception of tattoos. Body ink has long been stigmatised in Japan due to its links with the criminal underworld. In recent years tattoos have been associated with country's largest organised crime syndicate, the Yakuza, but their murky history dates much further back.

During the Edo period (1603-1868) criminals were often brandished with tattoos as a shameful and irreversible indicator of their criminal past. Meanwhile, tattoos were also associated with firemen, who wore them as a kind of spiritual protection. As Japan began opening to the West and it sought to create a good impression on foreigners, tattoos were made illegal during the Meiji period (1868-1912), though the ban didn't last. The stigma however did, at least for quite some time.

In 2019 having—or getting—tattoos in Japan is well within the realms of legality, but the shift in attitudes towards them has taken a little while. So what do Japanese think about foreign tourists with tattoos?

I spoke with 3 inked-up expats about how (if at all) their tattoos affected their lives in Japan. They shared some useful information based on first-hand experience, pro tips for life and work in Japan when you've got tattoos, and of course, some interesting stories. 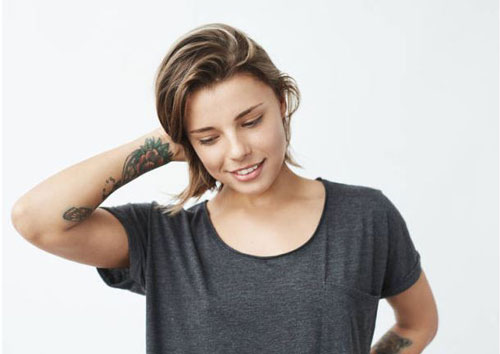 Annais, a 19-year-old Liberal Arts student from France, is relatively new to Japan. Her five tattoos—three on the arms and two on her ankles—are pretty visible, but in general her experiences have been pretty positive thus far.

What kind of tattoos do you have?
"I have one big cat fused with a dragon on my left arm, 'determination' written in Arabic below that, two hands making a symbol on my right arm, and then two smaller ankle tattoos".

I asked Annais if she had experienced any problems in the three months that she has lived in Japan, as a result of her tattoos. "No problems per se," she replied, "although I do feel like I have less freedom than others if I want to go to an onsen."

This is of course a common concern among visitors with tattoos, so I asked if she had encountered anything overtly negative yet. "Nothing really negative, though I am unsure about which sento are tattoo friendly, and I don't speak much Japanese yet so I just decided to go later in the evening to avoid any awkward situations or stares and that kind of thing".

This seemed to work for Annais, and going to onsen/sento in the evening or during quieter hours isn't a bad idea if you're worried about how other guests may perceive your ink.

In your experience, were there any other places where you felt your tattoos may cause an issue?
"Not really," she replied, though after a thought she followed it up with, "however, I was in a museum in Roppongi with my tattoos exposed and I felt that people may have been staring at them. Maybe they weren't, but I didn't feel comfortable having them [on display] in that situation."

Did you get any tattoos in Japan?
"Not yet, but hopefully in the future. I have been doing tattoo research for a while, but unfortunately most of Tokyo's tattoo artists don't seem to do tattoos in a style that I like. Many of them are more traditional or just feel outdated."

Annais suggests tempering your expectations if you want to get a contemporary style of tattoo in Tokyo. She is thinking about going to Korea to get one instead. Recently in Korea, the tattoo subculture has been riding the crest of an ever-growing wave, and some of these artists are beginning to break their way into the Japanese market.

Final Advice?
"Don't worry about having tattoos too much, but obviously be sensitive about showing them off in certain situations. In my University having tattoos seems completely fine, plenty of students have them, even Japanese ones." 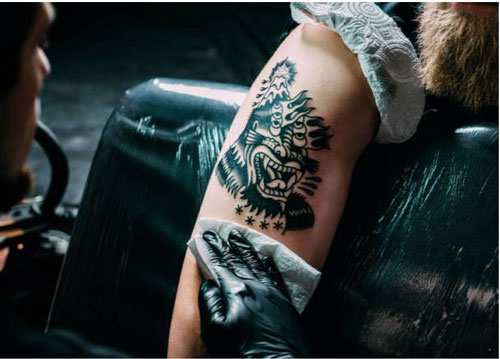 Aaron, a 25-year-old from the US had been to Japan a few times before living here as an ESL teacher in Yokohama. A true fan of Japanese art, he has lots of body ink inspired by local culture.

What kind of tattoos do you have?
"As of right now, I have seven tattoos. Two small ones by each of my ankles, one medium sized one on the back of each arm, and a half sleeve that covers my upper leg. The leg sleeve is a Japanese traditional style tattoo. The ones on my arms are more of a modern style but with Japanese motifs, and the ones around my ankles are simple lines with a little bit of shading or color."

Aaron encountered few problems in Japan, but the hot spring issue cropped up once again. "The only problems I’ve encountered have been at onsen but usually I call ahead of time to ask before I go, so I haven’t had any uncomfortable confrontations."

Another common place where tattoos may be forbidden are gyms. In Aaron's case however, there was no real issue. "I go to the municipal gym in my neighborhood and they don’t mind (although I do get some stares from the older residents)." Generally smaller and municipal gyms don't mind too much, however some of the larger chain gyms may have more rigid tattoo policies.

Do you have any other notable experiences as a result of your tattoos that you'd like to share?"
"I think there’s a big generational gap in Japan when it comes to tattoos and just like with any country the bigger modern cities tend to be quicker to move from traditional cultural norms. I’ve never really felt judged in Tokyo or Yokohama (where I lived) but often felt the glares of elderly residents especially in more rural or traditional places like Kyoto, Nara, Kanazawa, et cetera."

Did you get any tattoos in Japan? If so, what advice would you give others looking to follow suit?
"My leg sleeve, as well as the tattoos on both my arms, were done in Japan. One of the arm tattoos was done by a Korean doing a guest spot in Japan, the other arm piece and my leg sleeve were done by a Japanese artist. In my personal experience (perhaps) because there are much fewer tattoo artists in Japan compared to back home in America, it was a little harder to find an artist with a style that I liked. Also, I noticed smaller tattoos tend to be much more expensive than back home while bigger pieces were pretty similar. And, because there are fewer artists, sometimes they can be in high demand and be on a bit of a waiting list. The first artist I contacted about my leg sleeve was on a 2-3 year waiting list so it’s best to reach out as early as possible!"

Final Advice?
"I’ve only worked for one company in Japan so I can’t really generalize but from my experience it seems like companies are okay hiring someone with tattoos as long as they’re not visible, especially to the customers. That being said, I’ve been to tons of bars, restaurants, coffee shops, et cetera, where all of the staff are covered in tattoos."

"As far as travel goes, I would say it’s best to call ahead to the onsen if you’re worried, but there are websites that can help you find tattoo friendly places." 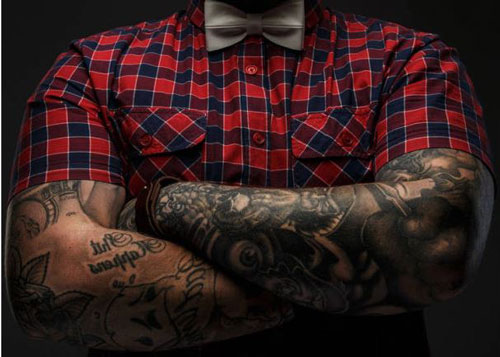 Joe is a 38-year-old American of Korean descent, and due to his Asian origin, he is aware that local perceptions of his tattoos may be a little different than for most foreigners. "I am a pretty big Asian guy and I am bald," he told me. "So, lots of people probably perceive me to be Yakuza or Bouryokudan [crime member]. I'm actually a high school teacher at a private school."

With so much visible ink, I assumed this probably causes its fair share of issues. And indeed it does. "I can't go to hot springs and gyms. I go to a gym now and I always have to wear long-sleeved shirts and pants to hide all my tattoos all year round. I actually I lied to the gym about my tattoos." He admitted, "And occasionally I'll be declined [entry] into restaurants and resorts."

Joe feels that there is certainly an element of discrimination that comes with being a heavily-tattooed Asian guy in Japan. "It's hard to explain, but being discriminated against is something that happens to me more than I'd like."

Do you have any other notable experiences as a result of your tattoos that you'd like to share?
Joe's experiences actually contradict the general consensus that the country's more metropolitan areas are quicker to accept the growing tattoo culture.

"I lived in the countryside in Niigata for the first two years of my life in Japan. While I did get judged by my neighbors at first, I feel that people from more rural prefectures are a lot more accepting of my tattoos than in Tokyo or Osaka. I've never actually had any problems going to any onsen in Niigata, Fukushima, Toyama or Miyagi."

Did you get any tattoos in Japan? If so, what advice would you give others looking to follow suit?
"I've gotten a lot of my tattoos in Japan. The sleeve and the Korean Gargoyle were done by Tattoo Church in Shimokitazawa, unfortunately that guy is now in Germany. And the Captain America tattoo and crow were done in a tattoo place in Yokohama called Fanatic Tattoo. Kai, an artist there, spent time in the UK, speaks English well and does a lotta work for the US military guys around Yokohama and Yokosuka. As for advice, I think that tattoos on non-Asian people are generally accepted. Lots of famous people have tattoos, Famous athletes, musicians and actors. It's cool. If you are Asian and want to get tattoos in Japan, you really should think about it. As an Asian with a tattoo you can get lumped in with bad people. Then again, I do have a lot of tattoos and I do look the way I do, so it might just be me."

Final Advice?
"I think as long as you are being respectful you should have no problems during a vacation. Also, if you're worried about it you can check online for tattoo-friendly places in Japan. As for work, I'm sure if you work back at home, you would generally dress professionally or business casual. If you do the same it should be okay. I have a friend who has full sleeves, and he just wears a long sleeve dress shirt all year around and he doesn't seem to have any problems. If you're a person that absolutely must show off your tattoos, even in an office type of location, then [unfortunately] you probably aren't the type of person a Japanese company wants."

VIDEO| Seeking out Japan’s autumn season in Karuizawa and Kusatsu