On leaving the old town of Sawara, we headed to a majestic Shinto shrine and power spot that boasts more than 2,600 years of history and carries the highest shrine status in the nation. 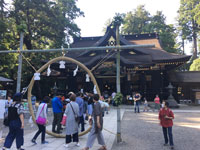 Katori Jingu Shrine has been known as one of the three most prestigious Shinto shrines in Japan, ranked with Ise Shrine in Mie Prefecture and Kashima Shrine in Ibaraki Prefecture.

The enshrined deity, Futsunushi-no-Ookami, is believed to mitigate natural disasters, provide protection, and is a guardian of martial arts.

The quiet and solemn shrine is surrounded by rich, green forest. Unlike the striking vermillion-colored buildings of other shrines, the buildings of Katori Jingu Shrine are covered in a unique black lacquer. The main shrine dates back to 1700 when it was built by the Shogun Tsunayoshi Tokugawa and is designated as an important cultural property.

After the shrine, we drove 20 minutes to Shinshoji Temple, another power spot nearby. This temple draws about 3 million visitors annually for a traditional New Year’s visit – the second largest in Japan, next to Meiji Shrine in Tokyo.

Since its foundation in 940, the temple has been known as a sanctuary to ward off evil. 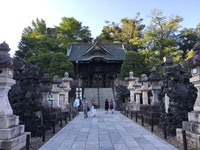 According to Japanese tradition, ages 25, 42 and 60 for men, and ages 19, 33 and 60 for women are supposed to be unlucky years. When someone turns one of the unlucky ages, they visit Shinshoji in hopes of warding off evil fortune. Although I am not at an age of unluckiness, I visited the large main hall, put my hands together and wished for even better luck.

Whether you’re at an unlucky age or not, Shinshoji’s main hall, main gate, 3-story pagoda and elaborately-carved Shakado (hall for Buddha) are worth some time to admire and explore.

And, make sure to stop in one of the many shops and restaurants along the approach to the temple for a quick snack and some souvenirs. 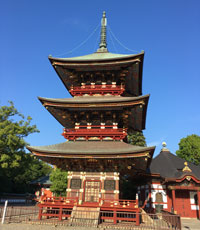 Visit Sawara for the old-style charm and take a little detour for a little good luck at one or both of these interesting power spots.

Stationed in Japan? Step back in time in Sawara!