Last winter I discovered the meaning of champagne powder, a phrase that conjures bright eyes and ear-to-ear grins for skiers and snowboarders alike. Interestingly enough, a hefty daily dumping of snow plus a lack of sunshine conspire to produce this magical snow, but no one seems to mind grey skies and persistent snow flurries when it’s a trade-off for this soft, cotton-like snowfall.

Niseko, Hokkaido earned its stripes on the international ski scene roughly 50 years ago when Australians started flocking to the area. Hirafu is the central village where most restaurants and bars are also located. Purchase an all-mountain lift pass and you gain further access to Niseko Village and Annupuri, which are home to some nice accommodation choices, including the Hilton and Greenleaf properties. Rates start at around ¥15,000 on weekdays and can double on weekends. Annupuri is also quite popular for beginning ski bunnies and families because of its wide, gentle slopes. Local buses run between all ski areas between 8am and 8pm for a small fee, but with the all-mountain pass there’s no charge.

The less costly Grand Hirafu lift pass includes the Hanazono runs, which can be reached via free shuttle buses that ply the mountain route and include convenient pickup points around Hirafu. The Terrain Park and backcountry zones Blueberry and Strawberry Fields draw a fair crowd of snowboarders to the area. Try the 308 Café to enjoy the finest slope-side food in Niseko; their ¥1,400 bowl of steaming kani (crab) ramen is legendary. For lunches near the Hirafu lifts, Downtown Cafe and J-Sekka Deli, located across from The Vale Niseko, are top picks. J-Sekka wins the prize for best coffee in town (amazing cappucino for ¥450)and also sells fresh Hokkaido meats and cheeses.

Unlike Niseko’s sister city St. Moritz, Niseko’s après-ski options are rather tame, but fear not, as there are plenty of places around Hirafu to enjoy some mulled wine and regale your companions with tales of your conquests (or fiascos) on the slopes. Unfortunately the turnover is high within the food and beverage industry and you’ll likely find that last year’s hot spots have either shut down or changed ownership, name or concept. Some of the region’s stalwarts are Blo Blo Bar, located on the main road, Hirafu-Zaka Street. Its signature ¥600 flaming cocktail ensures a steady stream of customers late into the evening (1am in these parts). 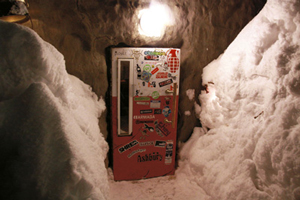 There are also some novelty bars worth checking out, including Gyu, or “Fridge Door.” Look for a miniature, bright red freezer door in a snowpile (pictured) midway down Yotei-Zaka Street to find the entrance to this drinking institution. The Ice Bar, rebuilt in a new location every year, is also not to be missed. This year’s venue featured a snow slide in the rear, an ice luge, and ice glasses with colorful, albeit pricey, ¥1,000 cocktails.

Hirafu has an abundance of restaurants, but if you want a table around prime dinner hour (7-9 pm), it’s wise to book ahead. Rin is a noteworthy izakaya in the Lower Village while Kakashi has a convenient location on Koen Avenue just off the slopes. The latter is a friendly, family-run establishment with a mama-chan who loves to drink with her guests. For affordable upscale dining, we recommend Lupicia in Hirafu South Village with four-course dinner sets priced at ¥6,500. Lupicia’s concept is European-Asian fusion prepared with local Hokkaido ingredients. Book ahead and they will send a van for pick up.

Finally, what ski holiday would be complete without an onsen trip? If you plan to visit at least two, consider buying a Yumeguri Onsen Pass. There is also a Yumeguri bus that will take you to all 12 participating onsens. Most facilities charge a towel fee in addition to the average ¥600 entrance fee, so be sure to bring your own or be prepared to pay ¥300 extra. There are typically a couple vending machines outside the main bathing area, so you’ll want to buy any drinks before heading in to change.

In Hirafu my favorite onsen is Yukoro on Yukemuri Avenue. It’s tiny, but they have an indoor and outdoor pool (rotenburo, pictured) framed with snow-covered boulders. Venture a little further out past Annupuri to Grand Hotel to find a scenic mixed-gender rotenburo, a rare find in Japan. For something truly special, Yukichichibu Onsen boasts over 10 different pools set amidst a mountain backdrop. Their red and yellow-hued pools have a strong mineral content and ladies can enjoy a mud bath. Yukichichibu is 25 minutes from Hirafu by car or the last stop on the Yumeguri shuttle bus.

* From Chitose, you can take either a JR train or shuttle bus to Kutchan, the next major town to Niseko’s central Hirafu Village. You can then catch the free shuttle bus on to Hirafu.

* Both the train and bus take around 2.5 hours with the Niseko Express train that operates during peak season, Dec-Feb. The bus is more direct, cheaper and simpler for those with heavy bags, but the train stops in Sapporo if you want to schedule a stopover in Hokkaido’s capital.

Get out and explore Japan's fabulous autumn foliage

Visit a museum in Meguro, Tokyo once home to a prince