Shimane: land of gods and legends

Shimane: land of gods and legends

Watching the mist roll over Shimane’s shrines and ancient cedars makes it easy to see why it’s known as the realm of gods or the land of myths. Around a third of the myths compiled in the Kojiki, Japan’s oldest mythological chronicle, are said to take place in the Izumo region of Shimane Prefecture. Sparsely populated Shimane is brimming with natural beauty, ancient shrines and temples, world-class gardens, and a historic castle and teahouse. It’s a cyclists’ paradise as well. 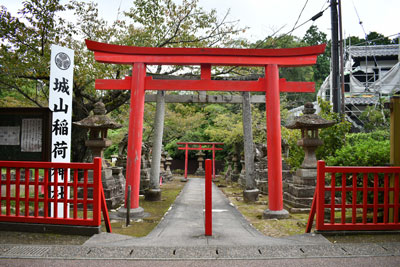 Getting to remote Shimane is the first part of the adventure; it’s around a 7.5-hour train ride from Yokosuka (take the Tokaido Line shinkansen from Shin-Yokohama to Okayama, then the JR Yakumo limited express from Okayama to Matsue, 2 hours 45 minutes). Short-term visitors to Japan can take advantage of the JR Sanyo-San’in or San’in Okayama rail passes, which offer unlimited three-day use of limited express trains (including nonreserved seats on the Yakumo) and sizeable discounts at area attractions and museums. 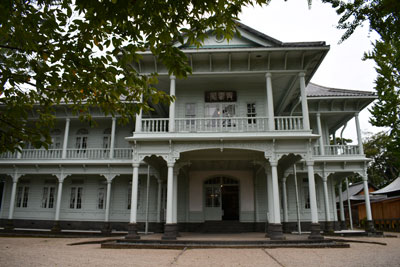 Nestled between Lake Shinji, Nakaumi, and the Sea of Japan, Matsue is fittingly known as the “water city.” Upon arriving at Matsue Station, be sure to check out the Matsue International Tourist Information Center located in front of the station for helpful English-language maps, brochures, and suggested itineraries.

The foundation of Matsue Castle (also known as Plover Castle, or “Chidori-jo”) and the surrounding city began in 1607, and the castle was completed in 1611. Matsue Castle is one of 12 “original” castles not destroyed by war or fire. A popular way to view it is by taking a sightseeing boat on a 50-minute guided boat tour. The castle grounds and nearby areas are illuminated by hundreds of handpainted paper lanterns during Matsue’s magical Water Lantern Festival in October (http://suitouro.com/).

Three clans ruled over Matsue: Horio (1600-1633), Kyogoku (1634-1637), and Matsudaira (1638-1871). One of the most influential leaders was the seventh lord of the Matsudaira clan, Harusato, commonly known by his tea-master name, Fumai. Fumai’s talents in improving industry, agriculture and trade brought Matsue back from near-bankruptcy. 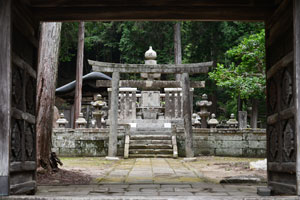 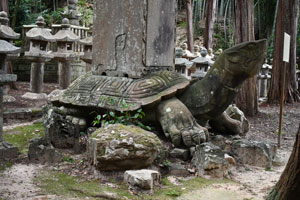 A strong promoter of tea culture, Lord Fumai even started his own style of tea ceremony. Along with Fumai’s grave, a monument to tea whisks (and an exquisite small teahouse and tea garden) can be found at Gessho-ji, family temple and burial ground of the Matsudaira Clan. As a result of Fumai’s efforts, Matsue is known as one of the top tea cities in Japan, as well as a producer of top-quality wagashi, Japanese sweets served with matcha. You can experience the tea ceremony at several locations around Matsue, including Meimei-an, commissioned in 1779 by Lord Fumai. The Matsue Castle Grand Tea Ceremony is held every year in the beginning of October. Known as one of the three largest tea ceremonies in Japan, ten different tea ceremony schools gather from across the country to celebrate Matsue’s tea culture.

Also near the castle is Kounkaku, a Western-style residence built for Emperor Meiji in 1903. It was common for cities across Japan to build lavish residences in the hopes that the Emperor would pay a visit (unfortunately for Matsue, Emperor Meiji never did). Fully restored, the house now offers a charming cafe on the ground floor and is free to explore (the grand banquet hall upstairs can be rented out for functions). 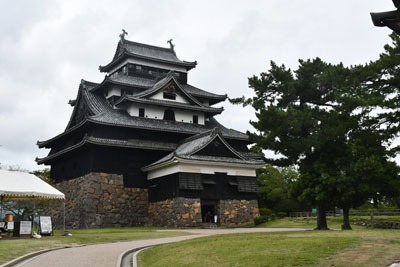 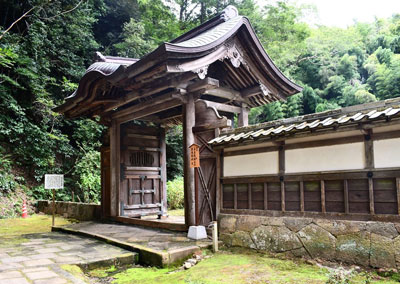 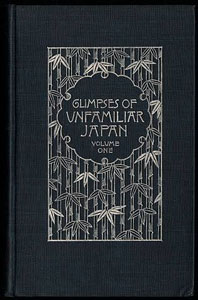 Patrick Lafcadio Hearn, also known as Koizumi Yakumo, was born in Greece and raised in Ireland. He originally arrived in Japan in 1890 for a newspaper job and spent a year in Matsue teaching English. Hearn married the daughter of an important samurai family, taking her family name.  He went on to teach in Kumamoto, Kobe and finally in Tokyo, including at Waseda University, and was one of the first Westerners to be granted Japanese citizenship.

Across the moat from Matsue Castle is the Lafcadio Hearn Memorial Museum (https://www.hearn-museum-matsue.jp/english.html) and neighboring Lafcadio Hearn's Old Residence, a charming samurai house where the writer lived from May to November 1891. It was in this house that Hearn began writing two of his most famous works: Kwaidan (a collection of ghost stories) and his classic Glimpses of Unfamiliar Japan, in which he eloquently chronicles many of his “exotic” experiences as a traveler in 1890s Japan. You can even sit at a reproduction of Hearn’s writing desk and admire the gorgeous gardens. 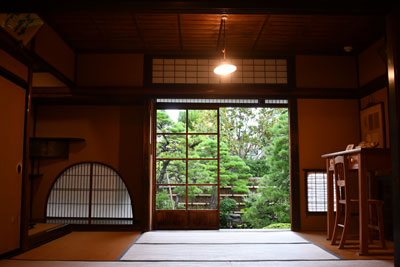 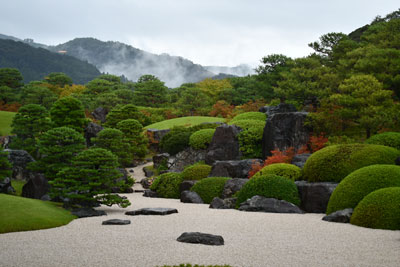 Nearby Yasugi offers the Adachi Museum of Art, but the real draw is the museum’s spectacular Japanese gardens that are consistently voted some of the top in the world. Six separate gardens including a Kyoto moss garden and dry landscape garden seamlessly integrate the neighboring mountains and landscape elements. Founder Adachi Zenko built the museum in 1980 to house the works of Yokoyama Taikan, and the gardens frame and mirror the artwork inside. A recent renovation has opened up more of the gardens to visitors (you can look but not explore). It’s well worth the $10 for coffee with an outstanding view of the dry landscape garden from the museum’s Midori café, and don’t miss the outstanding gift shop! 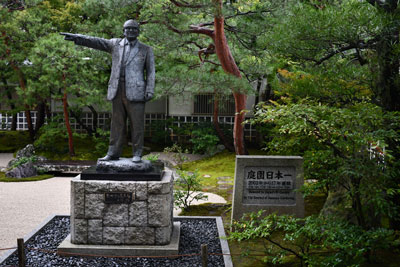 Address: 320 Furukawa-cho, Yasugi, Shimane, 692-0064
Website: https://www.adachi-museum.or.jp/en/
Access: Catch the free hourly shuttle bus from Yasugi Station (the ride is about 20 minutes) for an easy transfer (you’ll need to pick up a return ticket from inside the museum on your way out) 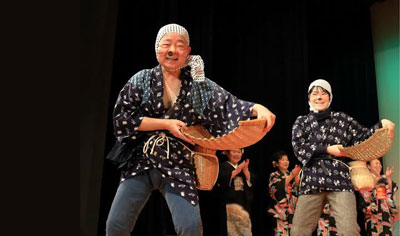 As soon as you step off the train in Yasugi, you’ll be greeted by a plethora of statues, photos and comical characters wearing blue-and-white work clothes with a towel wrapped around their head and a metal coin on their nose. Yasugibushi is one of the most famous folk songs in Japan, and Dojou-sukui is a folk dance that imitates scooping small fish that is known for its humorous movements and facial expressions. There are male and female forms of the dance, and the musical accompaniment is played on the three-stringed shamisen. You can catch a performance and even get a quick dance lesson at the Yasugibushi Performance Hall (http://www.y-engeikan.com/). 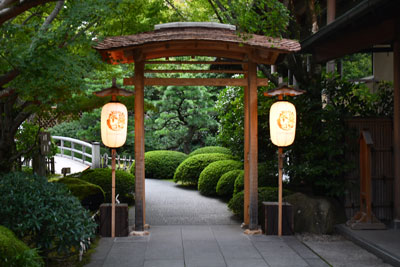 About one hour outside Matsue, Yuushien is built on the volcanic island of Daikonshima, offering seasonal flowers, trees, ponds, waterfalls, and paving stones arranged over 40,000 square meters. Unlike Adachi, visitors are free to stroll the gardens, and there are a number of impressive illuminations throughout the year, particularly in the fall and winter. Several restaurants and teahouses on site offer coffee, desserts, light meals, and soba noodles along with the island’s traditional crop of Unshu ginseng, which was cultivated and sold as a medicinal herb. 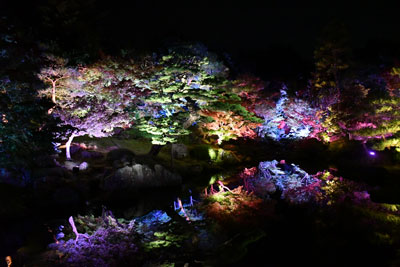 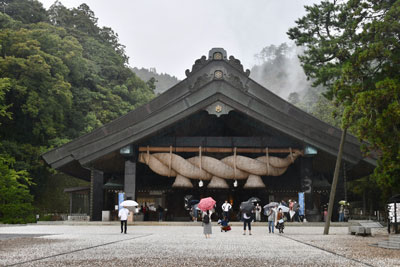 One of Japan’s three most important shrines, Izumo Taisha has been around since at least the early 700s and predates Ise Shrine. The main god (kami) enshrined at Izumo Taisha is Okuninushi no Okami, creator of the land of Japan and the ruler of Izumo. He also became known as the deity of good relationships and marriage, so you’ll see many young couples praying for a happy marriage here. Unlike most Japanese shrines, where you bow twice and clap twice, at Izumo you clap your hands four times (twice for yourself, twice for your current or future spouse).

Every year, from the 10th to the 17th day of the 10th lunar month, Shinto's eight million deities from across Japan gather at Izumo Taisha. This month is known as Kamiarizuki ("month with deities") in Izumo, and Kannazuki ("month without deities") everywhere else in Japan. The Kamiari Festival is held at the shrine during this period. 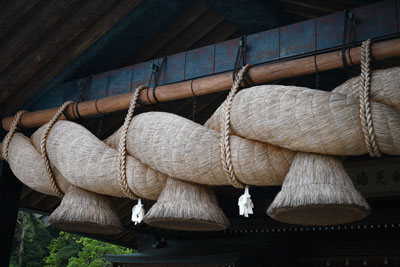 The huge sacred rice straw rope (shimenawa) is the largest in Japan at 13.5 meters in length, a weight of 4.5 tons, and a maximum of 8 meters in diameter. Unlike most shimenawa, the rice straw is twisted from the left and this distinctive method is referred to as Daikoku-jime (Okuninushi-no-Okami is also known as Daikoku, the deity of happiness and good fortune). You can even try your hand at your own smaller shimenawa at:

Iwami Ginzan Silver Mine was registered as a World Heritage Site in 2007. An active mine from the 16th to the 20th century, the high-quality silver mined here influenced economies around the world. You can learn more about the mine’s history at the Iwami Ginzan Silver Mine World Heritage Center (https://ginzan.city.ohda.lg.jp/about_us/).  You can also sign up for a variety of hands-on workshops to make your own commemorative keychain or silver coin (https://ginzan.city.ohda.lg.jp/about_us/experience/).