To the unknowing passerby, Uraga and Kurihama, near Yokosuka Naval Base, may be small and ordinary looking Japanese towns. But both are where American Commodore Perry and his “Black Ships” landed in 1853, which marked the beginning of diplomacy and trade agreements between the U.S. and Japan.

In Japan, Matthew Calbraith Perry (1794 - 1858) is one of the most famous American admirals in history, as his arrival led to the modernization and industrialization of the country. 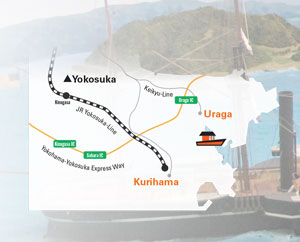 Up until the day Perry led four battleships of the East India Squadron to Uraga Bay, 3 miles south of Yokosuka, the Japanese were enjoying a relatively stable and peaceful society under the Shogunate government’s closed-door policy.

The sudden arrival of Perry’s gigantic battleships in Tokyo Gulf were a frightful sight for residents of the area.

Despite local officials’ demand to leave the country immediately, Perry refused and continued his request to meet with a representative of the ruling government, even daring to intimidate by firing blank shots from the ships’ 73 canons.

Eventually, Japan would allow Perry to meet with Shogunate delegates at Kurihama Beach, southwest of Uraga Port. It was at this beach where Perry presented President Millard Fillmore’s letter asking Japan to open the door for bilateral trading relations with open ports.

Unsure of whether they should open the door but wanting to avoid a possible war with the U.S., Japan and Commodore Perry signed the U.S.- Japan Treaty of Peace and Amity on March 31, 1854, which designating Shimoda and Hakodate as international ports opened to the world.

Today, visitors to both Uraga and Kurihama in Yokosuka City have a chance to touch a couple of the historical places and follow Perry’s footprint.

A 15-minute walk from JR and Keikyu Kurihama stations, Kurihama Beach is a tiny, quiet beach.

In the summertime, this white-sand beach is quite popular with the locals who enjoy swimming and barbecuing. When I visited earlier this year, it was still cold and there were only a few people strolling on the beach where Perry delivered his letter from the President around 165 years ago.

Across the street, Perry Park features a large monument dedicated to Perry’s arrival. The large stone has the following inscription: “This monument is to commemorate American Admiral Perry’s landing” in white kanji letters with the date of landing. A map of bronze relief on the pedestal stones showcases where Perry had stopped during his excursion. According to the map, his voyage lasted three years and included stops to Madeira, St. Helena, Cape Town, Mauritius, Ceylon, Singapore, Macao, Hong Kong, Shanghai and Okinawa before he finally reached mainland Japan.

Perry Park also has a memorial museum highlighting Perry’s life, his excursion and the historical landing in detail through various documents, Perry’s handwritten letters, along with drawings, scriptures and diorama models of Tokyo Gulf and Perry’s fleet. 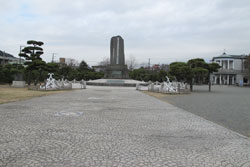 A 20-minute walk from the Perry Park, along Kurihama Beach and a path through the mountainside, brought me to a traditional Japanese-style lighthouse, called Tomyodo, on the west-end of Uraga Bay.

The two-storied wooden structure with a gray-tiled roof on stone walls looked as if it were a miniature castle tower. These days, the lighthouse is no longer in use but it is stands beautifully in the landscape. According to a signboard there, the lighthouse was fueled with grapeseed oil and lit up the sea surface as far as 5 miles, which very easily could have led Perry as he approached Uraga. Built by the Shogunate Government in 1648, Tomyodo was replaced in the 1870s by a Western-style lighthouse built near Kannonzaki Cape.

Uraga, itself is a hair-pin shaped narrow bay that shields ships from heavy wind and high tide, offering an ideal port to any type of ship. As I strolled along the bayside, I got great views of the blue bay, fishing and cargo ships berthed in the port on one side and mountains on the other.

Old traditional houses and buildings line Kon-yacho district in the west bayside, reminiscent of the days when Perry arrived in port.

There are two traditional Shinto shrines facing each other with a quarter mile of bay separating them.  Both shrines have the same name of “Kano Jinja” (literally “shrine of wishes-come-true”), and are distinguished from each other by the location -  Nishi Kano Shrine (west shrine) and Higashi Kano Shrine (east shrine).

Considered by Japanese as a “Power Spot,” a lot of tourists with wishes visit these shrines to worship.

There is a unique shrine tradition - if you get a magatama (comma-shaped bead) at Nishi Kano Shrine and put that into an omamoribukuro (amulet case) at Higashi Kano Shrine, it will bring you luck and your wish will come true, especially if it is regarding love life and weddings. 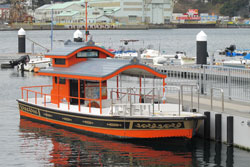 To obtain a magatame bead, I visited the Nishi Kano Shrine first. Built in 1842, the shrine is known for having more than 230 sculptures decorating the wooden eaves, giving it a kind of solemn and mysterious atmosphere.

I bought a magatama bead for 500 yen ($4) at the shrine shop before jumping on a traditional-looking orange ferry boat to Higashi Kano Shrine. This short cruise is an enjoyable way to look out over the bay and appreciate the port and ships docked there.

The East Shrine, compared to its counterpart, is brighter and has a more open atmosphere with its tall shrine building and light green roof.

Walking up along the stone stairs, I  faced  the  shrine  and made a wish in the traditional manner. Then, to secure the granting of my wish, I spent another 500 yen for the coveted amulet case at the shrine shop. 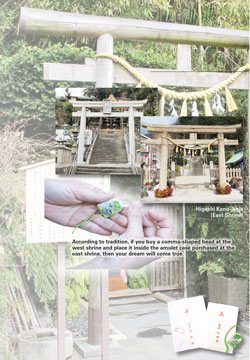 The bead from the West Shrine fit in the cute amulet case perfectly. It sure will make my wish come true! As it is tiny and cute, this lucky charm can be a great souvenir for friends or family members.

Standing on the shrine looking down at the bay, I couldn’t help but wonder how Perry felt when he saw this beautiful bay after his long cruise.