Editor’s Note: Due to COVID-19 restrictions, some locations may have different admission measures in place. Please plan ahead if and when you decide to travel. Follow safety guidelines set by your base and always remember to practice proper hand-washing and social distancing.

The Kanazawa district of Yokohama City, 10 miles north of Yokosuka Naval Base, was once known as a popular sightseeing attraction made up scenic shorelines and mountains, along with majestic Buddhist temples and library of samurai lord.

The scenic landscapes of the district were called “Kanazawa Hakkei” (Eight Views of Kanazawa district) and attracted visitors and inspired great ukiyo-e (traditional wood print) artists, such as Utagawa Hiroshige, to create their masterpieces.

Today, unfortunately, most of the beautiful inlets and coastlines drawn have now been replaced with modern houses and factories. We can, however, still get an idea of the attraction in its glory days by strolling around the district.

Recently, I visited the Kanazawa district with a copy of Hiroshige’s ukiyo-e work on a quest to view the eight famous locations.

After getting off the train at Kanazawa Hakkei Station of the Keikyu Line, I began my stroll with Seto Shrine, which was drawn in one of Hiroshige’s work – “The Autumn Moon of Seto Straight.”

When I saw the refined traditional shrine buildings surrounded by gigantic cedar trees, I felt as if I were taken back hundreds years. The shrine used to be located on a cape facing on a narrow strait of Seto, and locals have worshipped the God of Marine for safety in sailing on the sea. 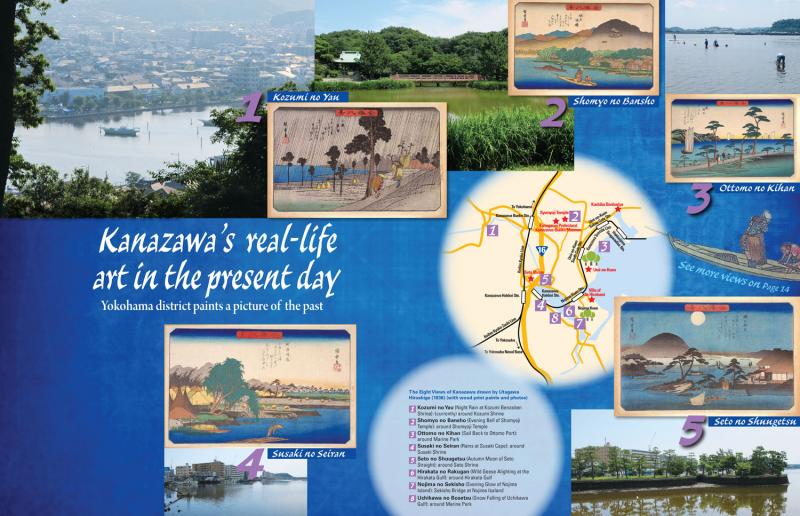 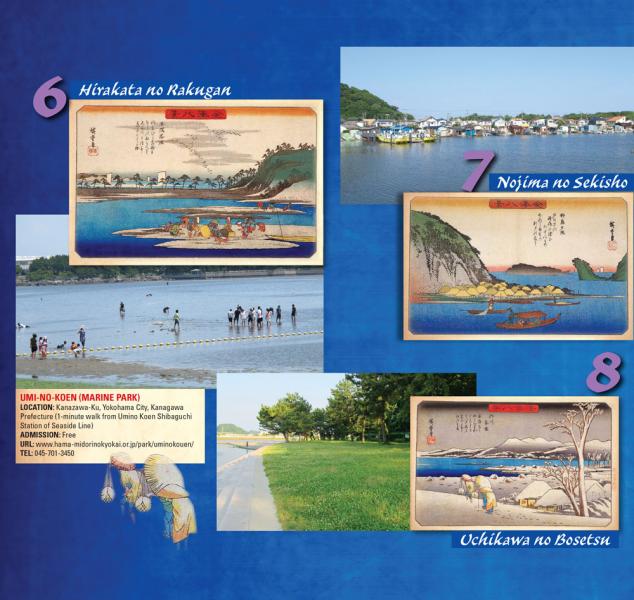 I found a narrow approach that stretched to a small Biwajima Island in front of the shrine. I walked along it and saw locals picking clams off the island, which reminded me of another ukiyoe painting of Hiroshige, “Wild Geese Alighting at the Hirakata Gulf.”

I hopped on an unmanned automated Seaside Line monorail at the station near the island. It ran along the Hirakata Gulf and gave me a panoramic view of the unique coastline with numerous fishing boats and cruisers.

Getting off the train at Umino-Koen-Shibaguchi Station and I explored Marine Park, one of the largest public parks in Yokohama City. The park is often filled with runners and sun bathers in the warmer months. 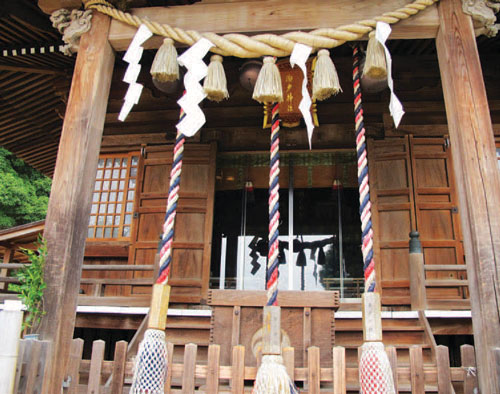 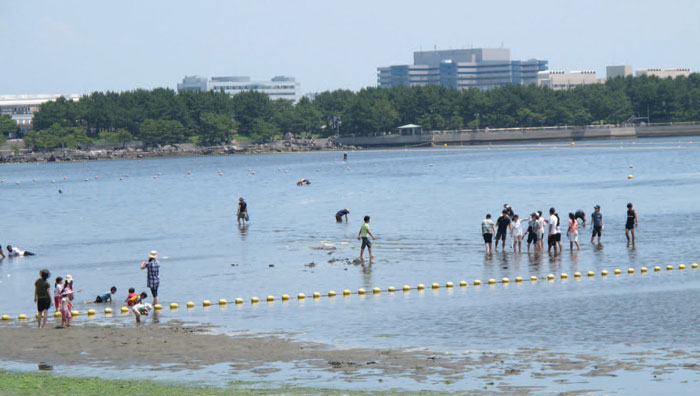 After the temple and historical museum, I strolled along the scenic Hirakata Gulf to Nojima Island while checking out pretty gulf with numerous fishing boats and cruisers.

Nojima Island is a fairly large island off the Hirakata Gulf filled with a large park, historical buildings and cave, as well as a residential area that accommodates hundreds of houses. From the observatory platform on the peak of island, you can look down whole the gulf and see the large public park along the shore, which is a good spot to enjoy barbecue, camping and other outdoor activities.

While you’re there, don’t miss a historical attraction, villa of Ito Hirobumi, home to the nation’s first prime minister.

The large wooden villa with thatched roof was built on the island in 1898, and showcases a typical Japanese traditional style villa building from the era.

In the villa was an exhibition about the first prime minister, and I was able to get a panoramic vista of the gulf and impressive garden with various flowers and trees. It was fun viewing the beautiful vista of Hirakata Gulf and I compared it with one of the Hiroshige’s works, “Evening Glow of Nojima Island.” To top it off, for 500 yen you can enjoy matcha tea in the guest room while viewing the beautiful vista. 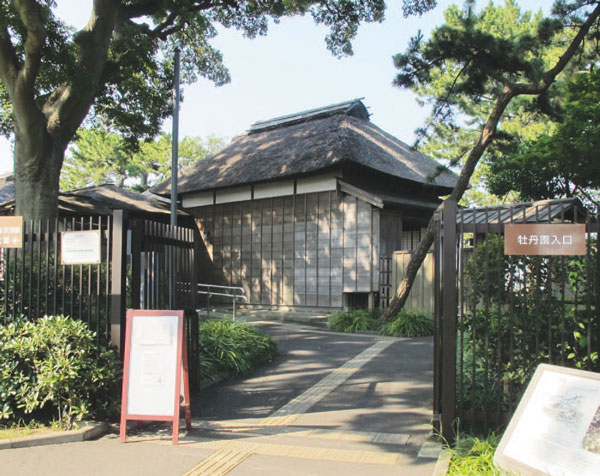 Located next to the Marine Park, Koshiba Donburiya is a popular tempura joint housed in an open shuck at a fishery port.

The shop offers conger eel and other fish brought to the port in the morning, along with locally produced fresh vegetables and mushrooms.

When I visited around 1 p.m., almost all the seats were occupied.

I ordered Sanshoku-don, a rice bowl with three tempura (conger eel, vegetables and mushroom) and miso soup for 1,100 yen.

Traditionally, Kanazawa district has been known for anago (conger eel) and shako (squilla) for hundreds of years.

The eel was very fresh and tasty. The soy-sauce based sweet broth went well with the thick and crispy tempura, which stood out the the chewy meat of the eel. The locally produced vegetables and mushrooms in season were also very fresh and tasty, and was a nice pairing with the rich flavor of eel.

Donburiya is a great eatery for lunch. But remember, it is open only lunchtime on weekends, and may close early when ingredients have run out. Visit there before noon on weekends to assure yourself a taste of this local cuisine. 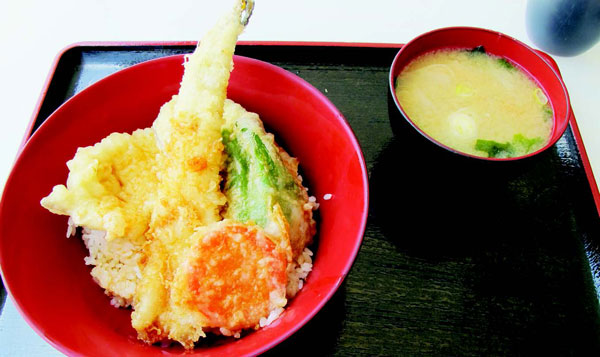 An eye-catching red wooden gate invited me into the 750-year-old Shomyoji Temple. There, I saw peaceful Jodostyle garden stretching around a large pond just over the second, taller grey gate. Two 10-feet-tall fierce looking wooden statues of guardian gods on each side of the gate scowled as people passed through the gate. The signboard said the sculptures were created and installed in 1323 and nominated as important cultural asset of Kanagawa Prefecture.

The temple garden reflects the paradise of Buddhism, according to the temple tradition.

Two red bridges over the pond and a flat island between the bridges are considered to represent the time (pastpresent-future). The first arched bridge shows tough and tumultuous experience in the past, while the second flat bridge shows the peaceful state of mind in the future. And the flat island between the two bridges represents right now, inviting us to learn the teachings of Buddha.

The peaceful and quiet setting of old wooden temple buildings in the garden seemed to reflect the peaceful state of mind. It was a pleasant stroll in such a calm temple atmosphere.

With Buddhist statues, paintings, records, and ancient writings on display, I was given a look at culture and history of the district in the medieval era. 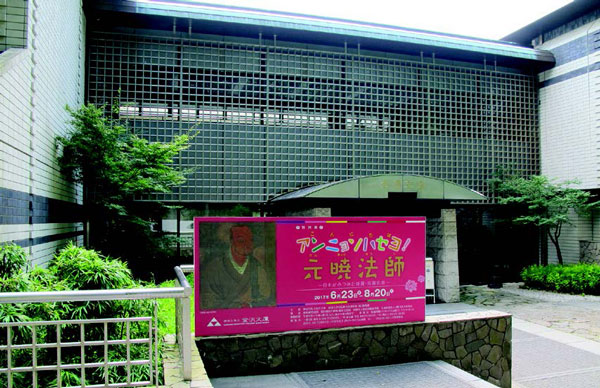 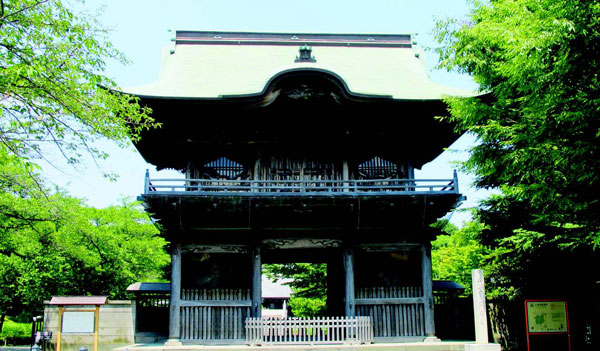 My Paradise: Spend a Day on Lantau Island, Hong Kong

VIDEO| Rooster market heralds the end of the year near Yokosuka