Considered a sanctuary for rail-fans of all ages, The Railway Museum, or Tetsudo Hakubutsukan, attracts more than 1 million visitors a year.

Just an hour train ride from Yokota Air Base, the museum offers a great one-day trip for airmen and their families.

I visited the museum, founded in 2007 in Omiya, Saitama Prefecture, to learn what attracts so many to visit.

When I got off a “new shuttle” monorail at the Tetsudo Hakubutsukan Mae Station, the modern-looking station was directly connected to the three-story museum.

Upon my entrance, I saw hundreds of visitors, mostly young parents and their children.

According to the brochure, the main floor holds 30 historical trains and their equipment, including the first steam locomotive in Japan, which ran between Tokyo and Yokohama in 1872. Up until then, I had only read of this train in schoolbooks.

Besides the steam locomotive, an elegant-looking imperial train and various rapid expresses were on display. I was able to get into the different cars to give them a look. This included the first model of the bullet train. 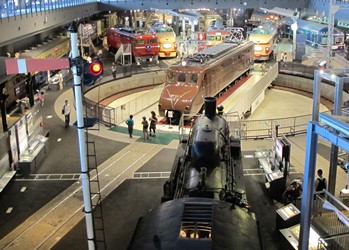 Along with the historical trains, Tokyo and Niigata station platforms from the 1950s were partially recreated with original electronic signboards, time tables, stairways and ticket gates. The dim light gave off a nostalgic feel, which took me back to my younger days, waiting for a train on a snowy evening.

There were plenty of volunteers just waiting for visitors to approach with questions. One such volunteer tossed me a gold-braised conductor hat, and snapped a picture of me in front of an EF55-type electronic locomotive.

The second floor provides a nice overview of the main floor, as well as a multi-purpose hall, a gallery balcony, cafeteria, museum shop and a room where you can learn about the basic science behind what makes trains go.

The diorama hall is one of the largest in Japan and has a nearly one mile-long railway. Various model trains run through the model towns and mountains. During a diorama show, members of the audience can choose their favorite train and have the staffer run it during day or night. 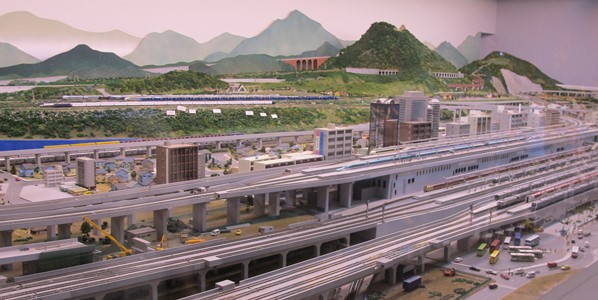 When you go, don’t miss a chance to operate the drive simulators. There are five available: D51 steam locomotive, bullet train, and trains on the Takasaki Line, Keihin Tohoku Line and Yamanote Line.

Following some instruction, I test drove a simulator of the Keihin Tohoku Line. I pulled the accelerator, and the landscape on the front screen started moving along with speed. While holding the lever downward, it’s gained speed until it topped off at 40 miles per hour.

If you wish, you can try to drive a steam locomotive for 500 yen. A staffer standing next to you will show you how to operate the locomotive.

If you get hungry while at the museum, there are boxed lunches available called Ekiben (station box lunch) at the museum restaurant.

There are four trains outside the museum where visitors can enjoy their lunch in a train car, as if traveling somewhere by rail.

There are also free one-hour guided tours offered at 10:15 a.m. and 1 p.m. every day. English-speaking volunteers are available, so you can use the tour to look more efficiently and to get a better understanding of the museum.

Nostalgic scenes, along with historical trains brought me back to my past, while the various simulators, diorama models and other amusement made me excited just like a kid. I’d say the The Railway Museum is a great attraction for visitors of all ages.

Okutama Town, Tokyo - Museums & Galleries: Surprises in the midst of a natural haven