Oshino Village is home to a set of eight ponds that were designated as a UNESCO World Heritage site in 2013. These ponds, known as Oshino Hakkai, are revered for their crystal clear waters, which come directly from the snow melting off Mt. Fuji. As the snow melts, the waters filter down the mountain through porous layers of lava and have done so for over 80 years. 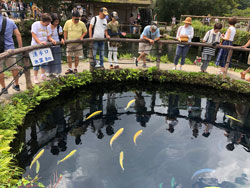 The extremely pure spring water was designated as one of the 100 Great Waters in Japan in 1985. For ages, the eight ponds located in Oshino Village – Deguchi-ike, Okama-ike, Sokonashi-ike, Choshi-ike, Waku-ike, Nigori-ike, Kagami-ike and Shobu-ike – were considered a sacred site for pilgrims climbing Mt. Fuji. While each pond is enshrined with a different dragon king, pilgrims hopped in one pond after another to soak and purify themselves before their ascent up the sacred mountain.

Recently, my family and I took a trip to visit this home of pure water.

We arrived at Waku-ike pond to a crowded area full of tourists. Oshino is known for the great views of Mt. Fuji, especially in the winter.

Our visit in the late summer, meant the majestic mountain was covered in clouds. The extremely fresh mountain breeze over the ponds and cool, refreshing highland air, however, were a reminder of our proximity to Fuji.

We saw Waku-ike pond, the largest and the most majestic among the eight ponds, which looked like a giant emerald with shining green water reflecting the sky and surrounding tree leaves on its surface.

According to signboard on the pond, NASA used water from this very pond for an experiment in making snow in space. 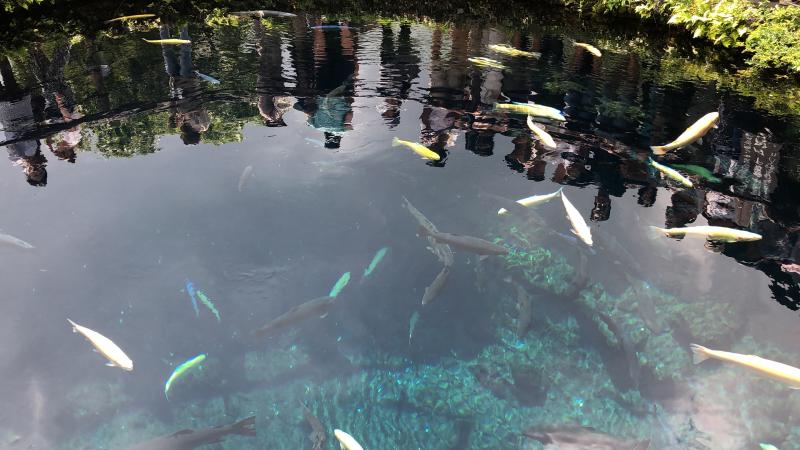 In the crystal clear water, we saw many carp swimming among the green freshwater plants just below the surface. We were able to sample a taste of the spring water from a dragon-shaped faucet near the pond. A surprise to us, the water was not too cold, though it was smooth and sweet.

Afterward, we headed toward the small open-air museum “Hannoki Bayashi Shiryokan,” located near Waku-ike pond. The admission is 300 yen ($2.70) for middle schoolers or older.

From the observatory platform at the entrance gate, we had a great view of the museum grounds, including a flower garden, traditional farmhouses and watermill with classic thatched roofs. We noticed one of the old farmhouses was open for visitors, so we made our way over there to check it out.

The 150-year old farmhouse exhibits various farming tools, household items, swords and armor. We checked out the displayed items in glass case, while walking around the three-story wooden building.

Oshino is also known for tasty vegetables, soba, tofu and eggs. We were approached by a vendor on our walk in the area and were offered a sample of grilled corn. This corn was fresh, crisp and sweet, unlike any ear of corn I could get in the city. This flavor, the vendor said, is due to the highland climate and extremely pure water from Fuji used to water the crop.

Tofu made in the village boasts a rich and full-bodied flavor. You can buy some at either Hakkai Tofu shop or Sumiya Tofuten in the village.

There are a lot of noodle shops in the village offering their own taste, too. We dropped by the noodle joint “Meisen Soba,” located in the parking lot. Various soba noodles, available hot or cold, will set you back between 600 to 900 yen. We sampled soba with mountain vegetables and ground potatoes. The soba noodle had a chewy yet smooth texture with a refreshing sweet aroma, which went along a with the semi-bitter mountain vegetables. It was delicious!

We wrapped up our tour by filling up our pet bottles with clean and tasty spring water at the noodle shop.

This short trip to Oshino left us refreshed, hydrated, and gave us a taste of how the pilgrims of yesteryear transited through the area in search of purification. 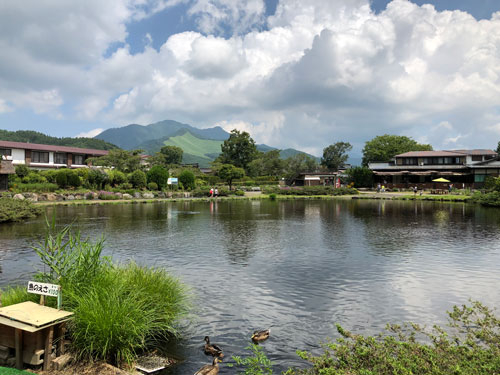 My Paradise: Camping at Lake Motosuko near Mt. Fuji