Kouri-jima is an island by Okinawa’s northwest shore of Nakijin peninsula. It is known for being a remote island easily accessible by car, which is a draw for many tourists. Though small in size (773 acres of land in a 4.9-mile circumference), Kouri can be big fun. My parents and I hopped in a car and made our way earlier this month for a quick getaway. 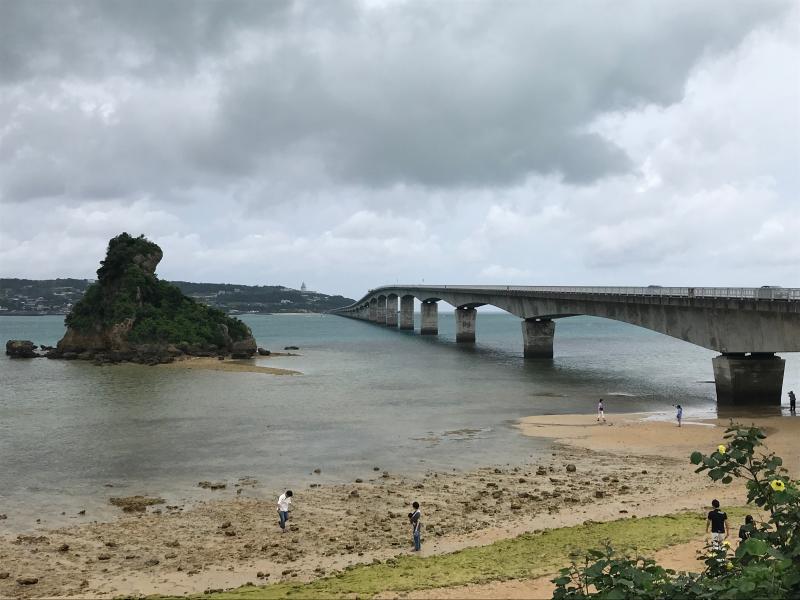 From my home in Nishihara, it is about a 1.5-hour drive, which includes crossing a bridge to another island, Yagaji-jima. If you are coming from Camp Foster, the distance is similar. When we came to the north end of Yagaji-jima, we saw Kouri-jima beyond Kouri Ohashi, a 1.2-mile bridge. The view of the bridge running over the emerald green ocean to the small island is one you may have seen in travel magazines and brochures.

We stopped at a parking area at the end of a bridge for a break and to enjoy this iconic view before continuing onto our island destination. 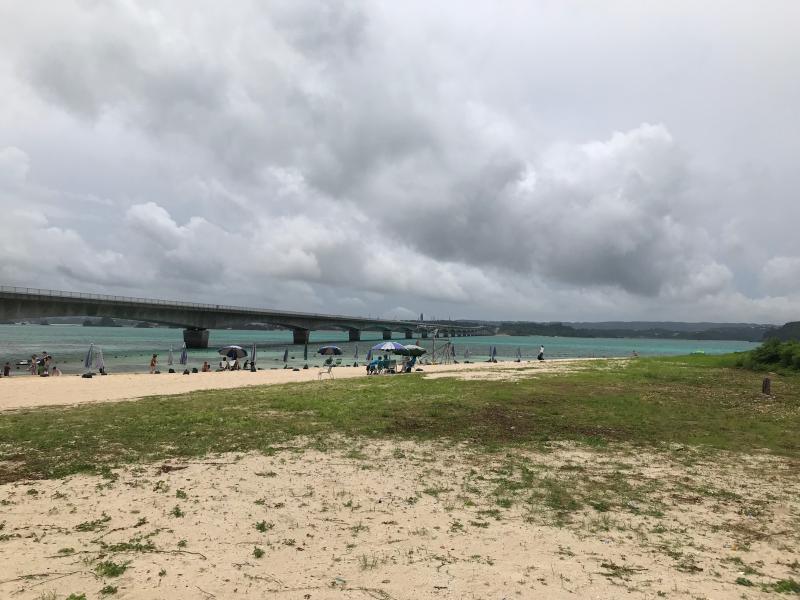 When we finally reached the island, Kouri Beach, packed full of visitors, was within view. The sandy shore stretches on either side of the bridge and is a great spot for a swim. The beach also has public facilities, including bathrooms and shower rooms. There are also several restaurants to choose from if you don’t want to bring a picnic lunch.

We opted to drive a few minutes past Kouri Beach and headed to Teenu Hama, another popular –albeit, smaller— beach between rocky cliffs. In order to get to its sandy shores, a walk down a bumpy road through bushes was required.

Going down the steep slope took us some time and energy, but the makeshift banisters running on the side made it an easier walk than it looked. My parents, who are in their 70s, made the round trip safely with a little help.

Once we approached the bottom of the slope, we could see a pair of large rocks forming the shape of a heart near the shore.

These are known as “Heart Rock,” which evoke the legend of Okinawa’s “Adam and Eve.” The legend says Adam and Eve arrived from heaven and are the earliest ancestors of the Okinawan people. 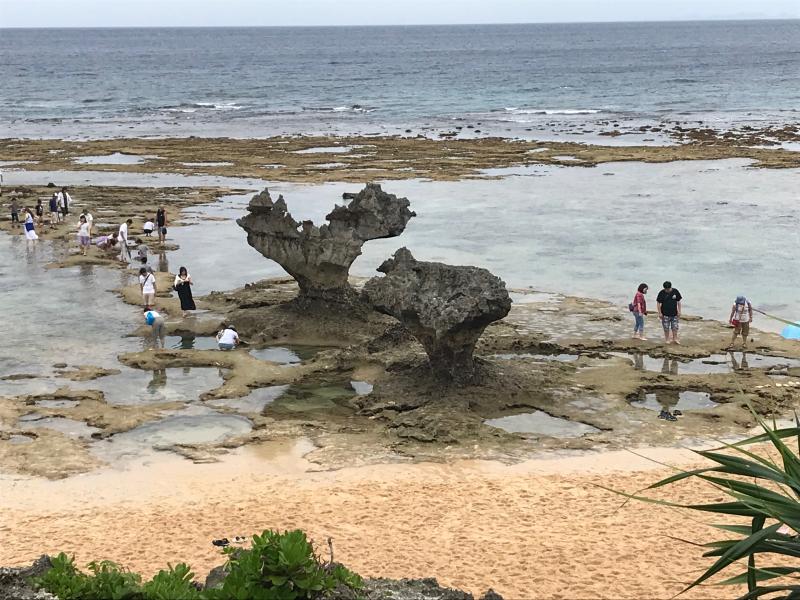 It is because of this legend, and the fact that Kouri-jima has long been known as “Koi no Shima (island of love)” or “Kami no Shima (island of god),” that this spot is considered a love power spot. A Japanese boyband’s 2014 commercial at this location also helped solidify its fame. The island’s website also notes that the name “Kouri” comes from “kui”, which means love in Okinawa’s local dialect, adding to the location’s romantic image.

At low tide, the bottoms of the rocks are exposed above the water, enticing visitors to come close. Lurking in small waterholes formed around the rock are small fish, urchins and starfish, which provide a small sample of the ocean life here. 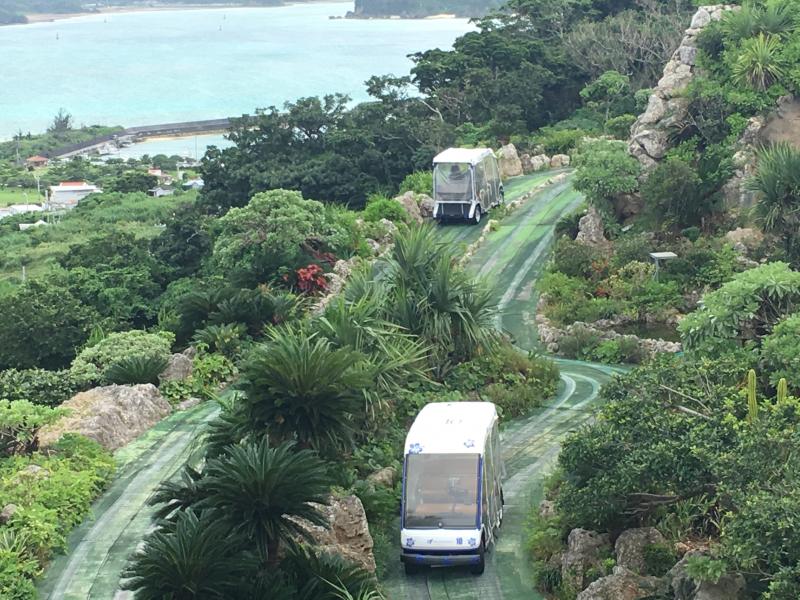 After our stop at the Teenu hama, we hopped back on the road to our next destination, Ocean Tower. Touring Kouri-jima is easy because there is a road that loops around the entire island.

The 118-foot white tower sits on a hill in the southwest part of the island and has a cone-shaped top. Because it has a somewhat futuristic design, the building looks like a space shuttle waiting for takeoff. Though not as exciting as a spacecraft, Ocean Tower still manages to draw tourists’ attention.

We entered the grounds surrounding the tower after paying our 800-yen adult admission fee. It felt like we were boarding a rollercoaster at a theme park, but instead we were led onto slow, driverless go-karts. This may be unsurprising in an age of self-driving cars, but the slow-going machines were a little bit of a surprise on an island which is mostly raved about for its beautiful nature.

The unmanned vehicle took us up to the first floor, traveling through a garden of tropical trees such as Adan (Pandanus odoratissimus) and sago palms, which were planted at the foot of the tower. As we road along other karts pass by, which reminded me of riding toy trains as a child. After the 10-minute ride, we took a lunch break at Ocean Café on the first floor before heading to the top of the tower.

Reminiscent of a tropical resort hotel, Ocean Café also offers a fine view of the sea and the Kouri Ohashi bridge. We ordered the margherita pizza (2,000 yen), another pizza with Shimabuta (or island pork) and Italian basil (2,000 yen), and pasta with meat sauce made with Agu, a rare kind of pig indigenous to Okinawa (2,100 yen). The Naples-style pizzas featured sweet and sour tomato sauce, soft mozzarella cheese and puffy dough, which made us very happy. The sweetness of the pork gave a nice local touch to the Italian dishes. Our meals all came with a dessert buffet and drink bar, making for a very satisfying lunch. 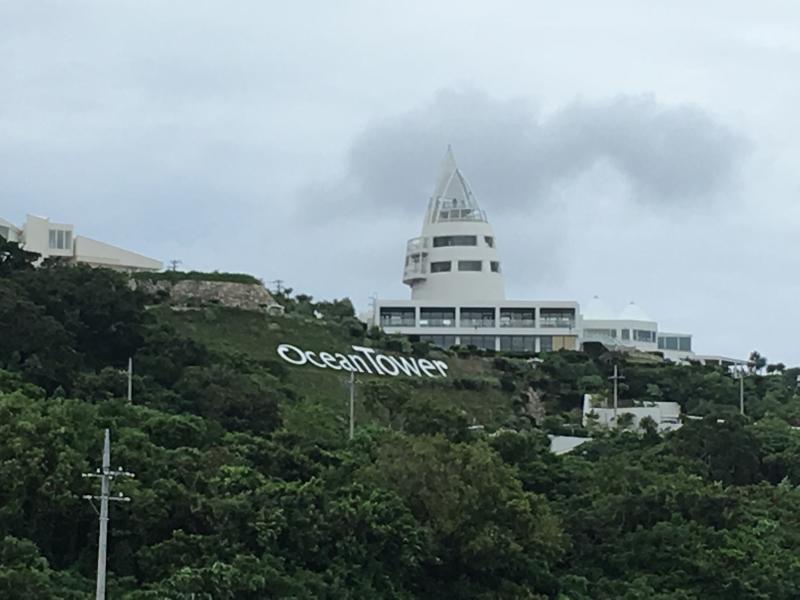 For the last attraction of our tour on the island, we went to the top of the tower. Via elevator and stairs, we reached the rooftop. The upper deck was the shape of a ship with the bow of the hull forming a triangle. For couples, this would be a perfect spot to pose like Leonardo DiCaprio and Kate Winslet in Titanic, only if you’re not afraid of heights. But even solo, the view from 269 feet above sea level was worth a try.

From the viewpoint, the long bridge looked like a toy, and the ocean looked like a static photo. The karts below moved like minicars with tiny people aboard. Looking at the view, we felt like we were in a different world.

Soon after, we departed Kaori Island and headed back home after a full day of exploring. Only a short drive, but worlds apart, the trip to the island of love was a great getaway.

Dive into Okinawa from deep retreats to eco tourism

A stop on Henza Island