I checked my Seikosha pocket watch, drawing it as close as the watch chain holding it to my waist coat would allow. It wasn’t unexpected, but she was late.

It was mid-day on the Mojiko Station square and the sun overhead was making me painfully aware of just how little shade a bowler hat provided compared to my usual boonie hat. Then I looked up and saw my picture beauty in her cheery kimono approaching from the station as if she’d just arrived on the mid-day train from Kokura. I stood up and adjusted the heavy woolen frock coat as she greeted me. It was time to get to work.

Emi and I had hit two years of marriage and we wanted to celebrate with a commemorative photo shoot themed for timeless love in a nostalgic setting. That led us to this square in Kitakyushu’s Mojiko Ward dressed in Western and Eastern clothing appropriate for the early 20th century.

Mojiko or “Mojiko Retro” saw its rise and decline during that time and has a fair amount of historic buildings, most of which are clustered around Mojiko Station. Using the same cropping techniques and carefully selecting the same kinds of angles used in filming period television shows and movies, someone with a camera on tripod (and patience) can easily spend a day creating special memories affordably while enjoying a town with a lot of character. 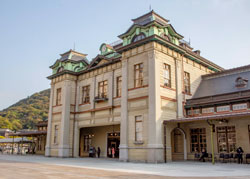 Once the gateway to Kyushu, Mojiko Station is now a nostalgic relic of the city’s time as a nationally important rail and shipping hub. This importance justified the construction of a Neo-Renaissance train station in 1914 that would be beautiful enough to greet an emperor and able to handle the flow of passengers from Honshu. Today, the traffic is low enough for romantic photographers to use the location with little trouble.

The station just finished a seven-year restoration to its Taisho era (1912-1926) prime so I’d waited years to see it unveiled and it did not disappoint. As elegant as one would expect from the era, little ornate details are worked into Mojiko Station’s interior design from the baseboards to the polished wood ceilings giving many different options for shooting inside and out.

If you shoot before 10 a.m., pedestrian traffic is low enough you can shoot the entire station without a single anachronistic modern person in the picture. Pedestrian traffic picks up after that and afternoon sees a light flow of people throughout. The station also lights up at night time.

Inside, we shot at the old ticket counters and at the wooden stairwell that leads to the Mikado Shokudo, a cafeteria, hidden just inside the left corridor. We were pressed for time so I’d chosen my favorite two spots to shoot inside, but there are little corners and spots throughout you may find attractive so I recommend scouting ahead of time before shooting.

As well as a transit hub, the station itself is both museum and artifact, so it’s worth walking its corridors to learn its story. The wine-walled VIP room is kept as if Emperor Taisho will be returning, but other spaces are now educational. The downstairs baggage room which has a video on the renovation, and a small artifact room around the corner. The baggage room can be accessed by crossing through the station, exiting the main lobby and looking to your right. 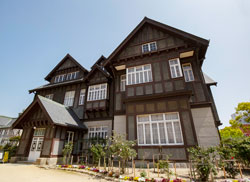 Our next location was across the street at the Mitsui Club. Mitsui, one of Japan’s biggest conglomerates, built the club to entertain transiting officers and dignitaries in 1921. A year later, the half-timber clubhouse hosted Albert Einstein and his wife during their visit to Kyushu. It’s just as detailed as Mojiko Station and the furnished Einstein rooms feel trapped in time. The red ropes and signage in these rooms are distracting so we opted not to shoot in them.

Since this was a fine dining club, we also ate here though the dining atmosphere is not as refined as the upstairs apartments. (They do serve tourists and people in anachronistic clothing after all.) While in Mojiko, the food to eat is yakicurry. This curry-over-rice dish is served in a hot bowl or plate and cooked in an oven. Mitsui’s curry is infused with banana since that was one of their prized imports. It’s not as weird as it sounds; Japanese curries often have fruit discreetly added for flavor. Service-wise my wife described it as feeling like it was run by the neighborhood oba-chans (grandmothers), which you can take as you like.

Yakicurry can be found everywhere in Mojiko and a few standout places to try are Mojiko Beer Factory and Mitsubachi. 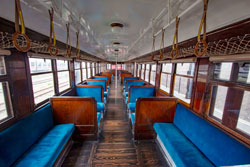 A place we did not shoot due to time was at the Kitakyushu Railway Museum adjacent to the train station. The museum has restored street cars from 1910 and 1936 that visitors can enter that would be perfect for this kind of photography, not to mention a couple of steam engines that would make for a good backdrop.

On the way to our last stop, we stumbled across a place I’d been trying to find on a map with no luck: the old Sapporo Brewery. Built for the Teikoku Brewing Co. in 1913, this akarenga (red brick) facility is the birthplace of Sakura-Beer, Japan’s third most popular beer before World War II. Recently revived and, once again, a Mojiko favorite, the lager is pleasant and adds some local flavor to meals.

Because I love old red brick buildings, we shot around the brewery’s back side which is devoid of modern obstructions. 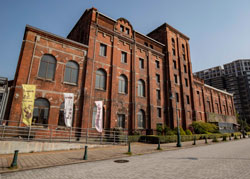 We returned the following day and tried the yakicurry at Garisole, one of the former brewery’s restaurants. We also stopped in at the Kitakyushu Beer & Brick Museum, the brewery’s former administration building, for a little history and artifacts from the original Sakura-Beer. 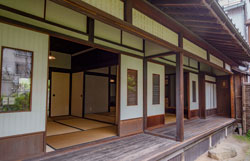 We concluded our busy day of shooting at my second favorite location, the Mori Ogai House. It was fitting as Ogai wrote sometimes stories with themes of romance and love, though they did not always end happily.

Ogai was one of the Meiji and Taisho era’s most famous authors and though writing is what he’s remembered for, he was actually a career army surgeon. Ogai served his country for three decades and retired at the rank of surgeon general. It is for this reason the Tokyo-based writer was stationed in Kokura for a few years and rented a room in this modest Japanese home built before his arrival in 1899.

This is the perfect spot for an intimate period shoot as this is a nicely-maintained traditional home. From a practical stand point, it also has no entrance fee and very few visitors. We arrived late but the caretakers saw our period clothes and reopened so we could shoot on the front porch.

The Mori Ogai House is a 20-minute drive from Mojiko Station or a short walk from Kokura Station. 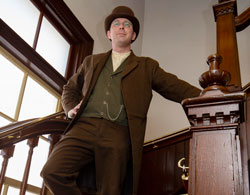 For clothes, the best place is Retro Nadeshiko, inside the former Mojiko Customs House, which rents hakama for men and women. Though the kimono is timeless, hakama worn with kimono was the Meiji and Taisho era’s trademark look for fashionable young women and students. Unfortunately, we arrived just before they opened for the season, so Emi rented a kimono from Muromachi Komon in Kokura, though there are many other kimono rental shops around the area.

I wore my own Victorian clothes, which I bought from Historical Emporium and River Junction Trade Co. Kimono outfitters, however, can also dress men.

We had a fun day that flew by way too quickly and many unique pictures to show for it. I hope this was useful and possibly fires your own imagination to go out and do this with your own spouse or significant other. Even if you don’t dress up, the Mojiko area has a lot to offer in terms of preserved history beyond these few places. If you walk around I’m sure you’ll find a few other places to add to your own photographic itinerary.