I have always associated the northern city of Niigata with frigid weather and heavy snowfall, full of the steep-roofed buildings essential for rugged wintery locales. However, when I visited this capital city of the prefecture with the same name recently, I was pleasantly surprised.

My wife and I arrived to find a leisurely city where people strolled casually even during morning rush hour. There were fewer cars and pedestrians than I’ve seen in other core cities. The pristine streets made me feel like I was in a resort town, not one of northern Japan’s largest cities. As for all the snow?

Well, it turns out that most of the roofs are like those farther south on the Kanto Plain. And a staffer at our hotel told me the city gets the least amount of snow in all of Niigata Prefecture; it hasn’t seen more than 40 inches of annual snow for the past 50 years; and winter temperatures rarely dip to 23 degrees Fahrenheit.

Located on northern Honshu Island facing the Sea of Japan, Niigata City is a relaxed elegant port town with traditional streets, famed sake breweries and quaint attractions that draw about 17 million tourists annually, according to its tourism data. With a population of about 789,461, it is the largest city in Japan’s Hokuriku Region. A bullet train connects it to Tokyo via a two-hour commute.

The Shinano-gawa, Japan’s longest river, runs through the middle of the city, separating the old traditional district from a sleek modern downtown. The six-arched Bandai Bridge spans the river. The 1,000-foot-long bridge was built in 1929 and is the city’s de facto logo. A prime example of the large-arched bridges built in the 1920s, it is a government-designated heritage landmark. 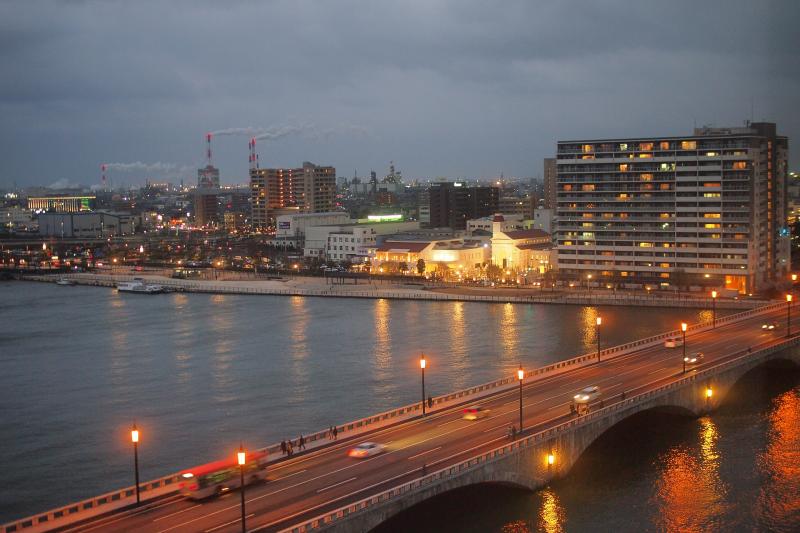 It’s easy to see why.

I couldn’t help but notice how the regal gray concrete bridge straddled the river relatively low, creating a majestic reflection on the water’s surface. My wife and I enjoyed strolling along the river at night, taking in the view of the bridge bathed in the orange glow of its lighting that refracted off the river below. I sight of true beauty

Although Niigata has been an important port for more than 500 years, its modern history began when Japan signed the Japan-U.S. Friendship and Trade Treaty in 1858. It resulted in Niigata becoming one of Japan’s first five ports to open for foreign trade after a centuries-long closed-door policy.

Since Niigata managed to escape major air raids during World War II, most of its old traditional buildings survived the war. However, many were lost to the Big Niigata Fire in 1955 and the Niigata Earthquake in 1964. Nonetheless, most of the city’s attractions are concentrated on the bank of the Shinano River in the upscale Oohata district and its Furumachi, or Old Town, district which is also famed for its discrete upscale after-hours entertainment.

We were able to enjoy many of these sights during our two-night stay in Niigata City.

Oohata is calm residential district with historical buildings, gardens, a museum, shrines and churches. One of the most beautiful Japanese gardens in northern Japan, the Niigata Saitou Villa, is the main attraction. 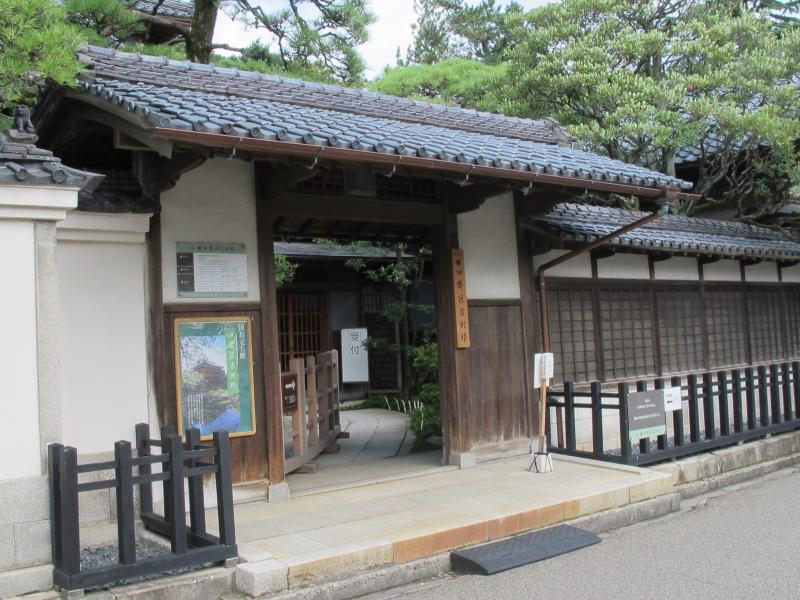 The villa was built by the Saitou Family, one of the five richest families of the region, in 1918. The main idea behind the design of 1.12-acre villa was to create a space without borders between the outdoors and indoors. When the windows are open, visitors can feel a sense of unity of between natural and manmade beauty. The number of pillars used in the halls is limited so as not to block the view of garden.

Tokio Ishida, a volunteer guide, suggested we sit in the center of the hall to view the garden. “In this way,” he explained, “you can take in the garden and building as one.” We did and the garden appeared as beautiful nature scenes framed by the natural wood of the structure.

This garden encompasses landscapes such as mountains, rivers, falls and valleys, which can be enjoyed in each season. This includes plum and cherry blossoms in spring, the luscious green of huge dignified pine trees in summer, the autumn leaves of more than a hundred maple trees, and views of snow in winter.

Guided tours in English are available from volunteer guides at no additional charge.

Niigata Cathedral stands a couple-of-minutes’ walk from the villa. It’s a beautiful church. Built by a Swiss architect in 1927, the church has two towers and a magnificent cathedra (bishop’s throne). A German-made pipe organ installed in 1929 is one of the oldest pipe organs still in use in Japan.

Strolling the paths around the villa and church was very fascinating. As we walked, the scenic figures and colors of the surrounding architecture changed from white walls with grey tiled roofs, to old red brick and then to black steel lattice.

There is also a prison on site. Views from the path of the villa’s gorgeous walls and the nearby prison have earned it the moniker of “Hell and Paradise Street.” 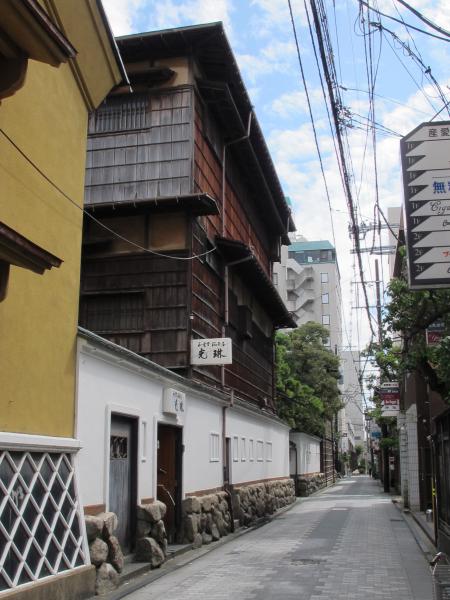 Located about a 10-minute walk from Bandai Bridge, Furumachi is Niigata’s old downtown. It used to be one of Japan’s three famed high-end red-light districts, along with Gion, in Kyoto, and Tokyo’s Shinbashi. Like Gion, it has since evolved into a center for traditional elite nightlife for those in in the know, and a site-seeing attraction in and of itself for tourists.

Even today, you can see many old luxurious restaurants, along with bars and shops in elegant classical buildings on the streets. It is fun strolling around the district in the evening when the streets are most active. You may even come across a geisha or two; but unfortunately we didn’t get a chance to see any during our visit.

After enjoying a stroll through Furumachi, we stopped by one of its restaurants, Inakaya, to sample a famous local dish, “wappameshi.” This is steamed rice and various ingredients in a round box made of thin wood. These days, the dish is overwhelmingly popular throughout Japan, but it originated at this restaurant.

There were options such as chicken, oysters and salmon. I ordered the “sake oyako” (salmon and salmon roe) wappameshi set for 2,750 yen ($25). It comes with local delicacies such as “noppei jiru,” a cold carrot, pork, potato and mushroom soup, “konyaku” jelly, fried fish cake and “jinbaso” (local crispy seaweed).

The tastes were very simple and gentle. It tasted as if no salts or sauces were applied. But the subtle flavor of each ingredient was distinguished and went well with the tasty local rice.

The classical wooden interior of the restaurant created a kind of folkloric atmosphere, ideal for savoring such local flavors. 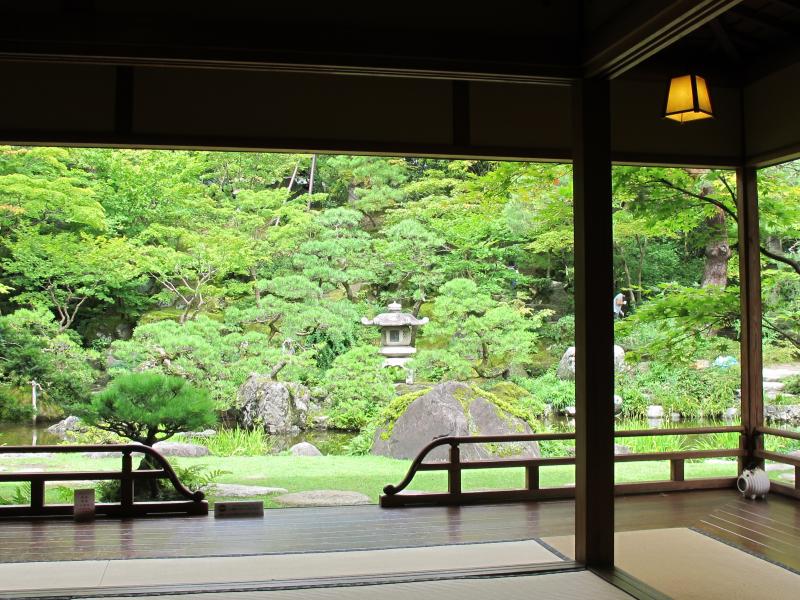 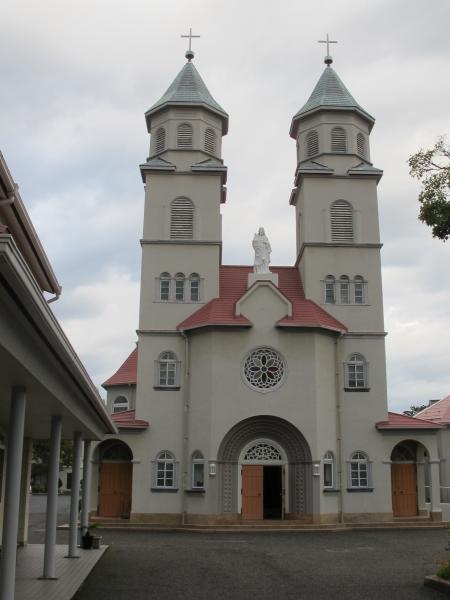 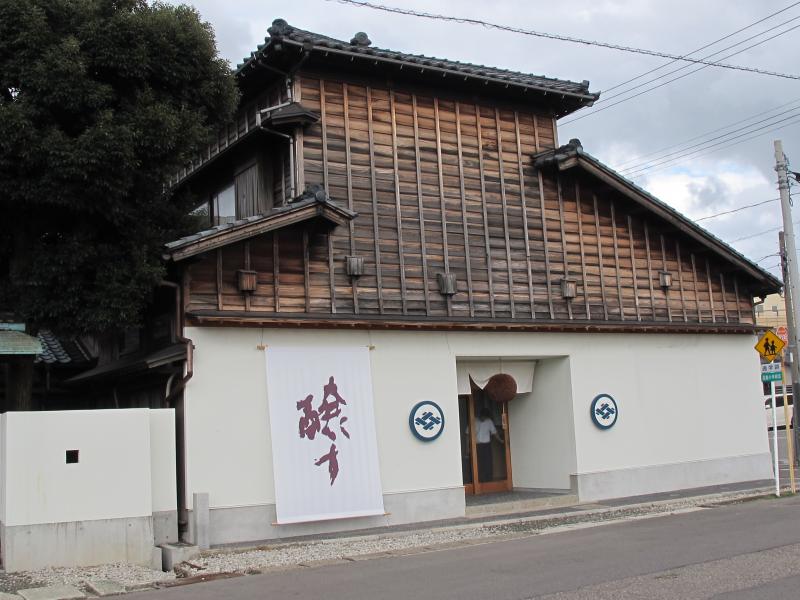 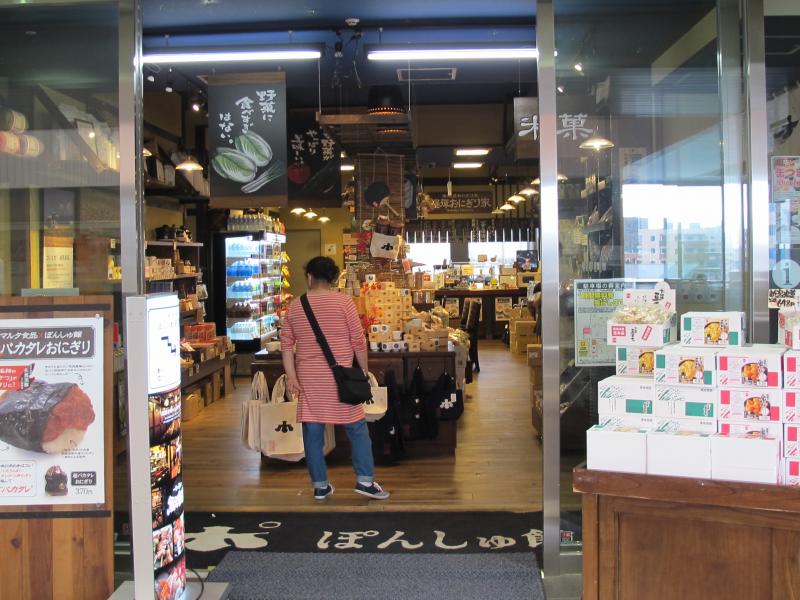 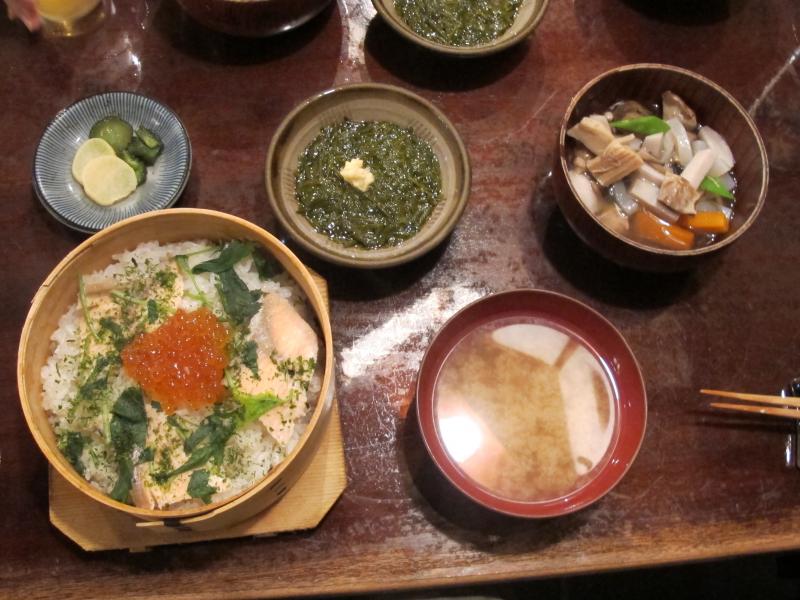 In quest of finest local sake 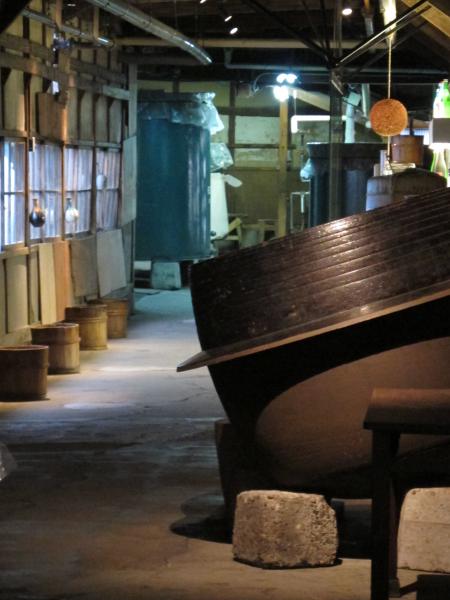 Niigata is known as one of the best sake brewing locales in Japan. There are 15 sake breweries, such as Koshinokanbai, Sasaiwai and Koshinohana, concentrated within the city. All of them are well known throughout Japan and have won various awards for their products.

One of the breweries, Imayotsukasa, offers brewery tours throughout the year by reservation.

Since sake making usually starts in October, we were not able see the beginning stages of at the brewery. However, we were able to tour the facilities and see the huge storage tanks while learning from a guide how they brew sake.

Breweries in Niigata usually mill or polish rice much more than other breweries. Well-polished quality rice and Niigata’s soft water, along with expertise of its brewers, gives the local sake a fresh, gentle and fruity flavor. Long low-temperature fermentation makes it crisp, dry and smooth, according to the guide.

Sake from Niigata is often called “onnazake” (female sake), while similarly famed sake from Kobe City’s Nada district is called “otokozake” (male sake) for its strong and full-bodied flavor. In fact, most of the tour participants with us were female. One young woman told me that she was fascinated with the gentle flavor of Niigata’s sake and was touring various breweries in the region.

After finishing our tour, we were able to sample all of the various products to our heart’s content at no extra cost.

Ponshukan is another must-visit site if you are interested in sake. Located on the third floor of JR Niigata Station, it is a museum-like shop where you can sample not only all 15 brands brewed in Niigata City, but all 53 brands produced throughout Niigata Prefecture.

For 500 yen you get five coins and a shot glass. You put a glass under the dispenser of the sake that you want to taste, insert a coin and press the button to fill it. In this way you can sample some or – if you’re able – all 53 brands to find your favorite. 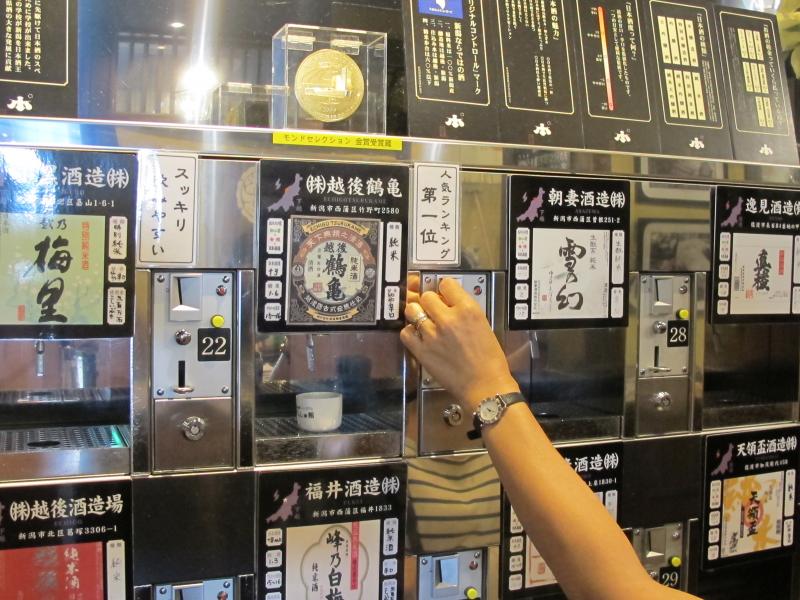 Echigo-Tsumari Satoyama Museum: Contemporary art at its best in Niigata

Niigata festival to include ironman-like race to castle