Japan, is one destination that my husband and I had always dreamed of visiting. We have always been fascinated by its culture, people, history, and don’t forget the food. So, for our 36th wedding anniversary we decided to make our dream come true. 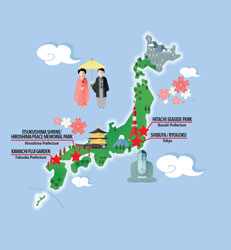 First on our agenda was to purchase a seven-day JR Pass. You have to purchase your pass two weeks in advance before you plan to travel to Japan as you can only purchase it online.

As soon as our plane landed in Narita International Airport, we immediately picked up our luggage, checked through customs and immigration and proceeded to find the JR counter where our passes awaited us.

Passes in hand, we boarded the train for our first destination, Hotel Gracery Shinjuku, which we chose because of it’s quick six-minute walk from Shinjuku station.

If you’ve never experienced Shinjuku station, it’s a must-see in Tokyo. One of the busiest in the world, the station has more than three million passengers each day.

After checking in our room and freshening up, we began our adventure. 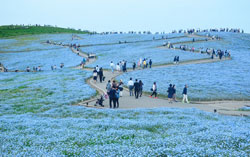 Day 1: The first stop was Hitachi Seaside Park in Ibaraki Prefecture. The 850-plus acres of flowers was beautiful. The blue nemophila, which the park is known for, covered Miharashi Hill and was spectacular. To go along with the flowers, the park also has an amusement park and trails for running and biking.

Day 2: Next up was the Wisteria Flower Tunnel at Kawachi Fuji Garden in Kitakyushu. The tunnel, the main attraction at the garden, allows visitors to walk down an enchanting tunnel exploding with color.

The garden is about six hours from Tokyo and they say the flowers are usually peaking at the end of April.

My husband and I decided to visit the place at night to avoid the crowd and to see the night illumination and we were not disappointed. The place is simply magical.

Day 3: We boarded the JR Tokaido/Sanyo Shinkansen for Hiroshima which is a four-hour train ride from Tokyo.

While in Hiroshima, we visited the Hiroshima Peace Memorial Park, Peace Memorial Museum and the Atomic Bomb Dome. In between checking out the historical sites, make sure you try the dish Hiroshima is known for – okonomiyaki. The crepe-like food is filled with meat, seafood, cabbage and more. My husband and I waited an hour in line just to try this food at one of the many okonomiyaki restaurants in the prefecture. We were not disappointed.

Day 4: While in Hiroshima, we decided to take a side trip to the beautiful island of Miyajima. There we visited Itsukushima Shrine, which is considered one of the best in Japan. The beautiful structure was actually built in the sea.

After a restful night, we left Hiroshima and headed back for Tokyo.

Day 5: Visiting Japan is not complete unless you experience Shibuya Crossing. Rumored to be the busiest intersection in the world (and definitely in Japan), Shibuya Crossing is where hundreds, if not thousands, of people cross at the same time. They come from all directions at once, yet still manage to nonchalantly dodge each other. It was so much fun crossing the street with the rest of the other 1,000 people. 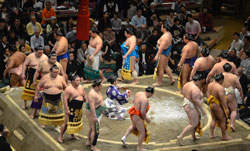 Day 7: Our final day in Japan, we decided to go to Robot Restaurant. It was different, but a bit too loud for my taste. After the show, we went back to our hotel for a good night rest before our flight back home.

Despite seeing all that we did, there are still so many places in Japan that we want to visit. We promised ourselves that someday we’ll make a return trip - perhaps on our 37th wedding anniversary!

My Paradise: Discovering the beauty of Australia

My Paradise: Count the reasons why New Zealand is trip to take

My Paradise: Backpacking adventure in the mountains of Japan

10 major Japanese cities: Which one should top your bucket list?

My Paradise: A golfing adventure in and around Iwakuni