MY FAVES: Japanese shrines & temples to visit during holiday season

MY FAVES: Japanese shrines & temples to visit during holiday season

The Land of the Rising Sun is home to numerous Shinto shrines and Buddhist temples.

It may be surprising to know these outnumber the 56,884 convenience stores, which seem to be everywhere you turn. In total, Japan boasts a whopping 81,000 shrines and 77,000 temples, according to the National Agency for Cultural Affairs.

Aside from the religious function of many of these unique locations, tourists flock to them for the colorful facades, towers and gates fit for great photo ops and history.

Kyoto, Nara, Kamakura and Tokyo are host to thousands of shrines and temples. You may have already visited the famous Kiyomizudera Temple and the Golden Pavilion in Kyoto, Tsurugaoka Hachimangu Shrine and Daibutsu in Kamakura and Sensoji Temple and Meijijingu Shrine in Tokyo on sightseeing trips. Since these are definitely must-see for tourists, the crowds can get a little overwhelming for locations meant to bring a sense of calm.

So, considering the other thousands of shrines and temples not mentioned above, below are a few of my favorite spots where you can feel the zen and beat the crowds. Visit one or more, I’m sure you will feel purified in the calm and solemn atmosphere of these temples and shrines. The New Year is a great time to visit these locations as it is tradition in Japan to wish for luck for the coming year. 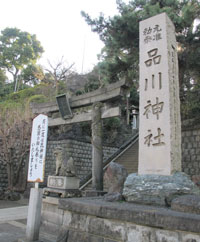 Shinagawa Shrine is a majestic Shinto shrine located in this old town. The shrine is known as a strong “power spot” – a location that many believe gives you power and luck.

Since Shogun Minamoto Yoritomo founded it in the 12th century, numerous feudal lords visited and worshipped here as they sought safety of sea travel and victory in battle.

High above on long gray stone stairs, you will find a traditional black shrine hall with two torii gates. Go through the torii gates and make a wish in front of the shrine hall by casting a coin, making two bows, two hand-claps and again, one deep bow.

Near the stone stairway, you will find a small mountain in the shrine garden. This miniature Mount Fuji, called “Shinagawa Fuji” or “Fujizuka,” is for those unable to climb Mount Fuji to have their wish granted. If you climb the mini-Fuji, be sure to make your wish at the top.

Hikawa Shrine in Omiya Town is known as one of the most prestigious Shinto shrines in the Kanto Plain and as such, the town is fittingly and literally named “large shrine.”

According to legend, it was founded more than 2,000 years ago, and has been respected by shoguns and lords throughout its history. Beautiful architecture, torii gates and gardens give this shrine a kind of majestic, yet mysterious atmosphere.

More than a mile long, the wide approach to the shrine is lined by impressively large elm trees, some that are more than 2,400 years old. 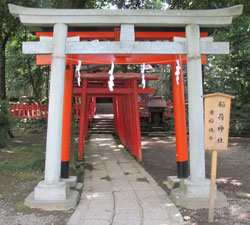 Omiya Park, the first modern park of Saitama Prefecture, is located behind the shrine and features a pond, zoo and traditional garden with various flowers.

The shii tree has been considered a tree of God, and the locals believe that touching the tree helps you recover from disease and give you a long life. Visit there and touch the tree with your hands to feel the power.

I make it a point to stop by the shrine when I visit Camp Zama. I always feel purified after offering a traditional bow - bowing twice, clapping my hands twice and again one deep bow in front of the main shrine.

Behind Zama Shrine, check out the Inuneko Shrine, a tiny shrine for pets. When I visited, I saw hundreds of ema (votive wooden tablets) hung around it. I couldn’t help but be moved when reading the tablets - one saying, “May my cat soon recover from disease,” and another saying, “May my deceased dog be accepted in heaven.” 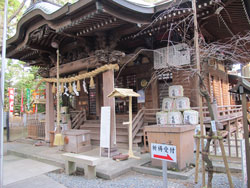 The origin of Zama Shrine dates back to 539-571, when an epidemic prevailed around the region. An old man in white attire told the locals to use spring water in the forest where the shrine is currently located. Sooner after the locals started using the water, the epidemic completely stopped. To commemorate this amazing event, the locals built the shrine, according to legend.

The legendary spring water is still available near the shrine’s stairway and you can bring some of it back home. I always do. The water is very clear and sweet, and perfect for making coffee or tea.

Zama itself, is blessed with plenty of water. There are 15 springs located within the city, which provide 85 percent of the city’s water supply, according to Zama City. 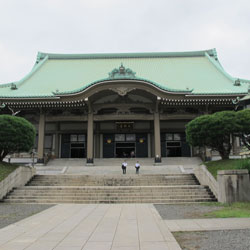 Sojiji Temple is one of the largest and busiest temples of Zen Buddhism in Japan.

Each of its 26 temple buildings, such as Buddha Hall, the bell tower and main hall has a unique majestic look with traditional tile roofs and elaborate black wooden walls. The buildings are old, but very clean and well-maintained. Corridors in the buildings were polished to look like glass, which is apparently because monks polish all of the corridors thoroughly twice each day.

There is an abbot (Master of Zen),or Zenji, along with 200 monks and novices that practice at the temple.

Go there in the morning and if you’re lucky, catch the solemn liturgy of the morning service by the Master of Zen and 50 other monks in formal attire in the main temple hall. Books of sutra are passed around, while the sutra are recited in accordance with sounds of a bell, cloud gong and the wooden drum.

Risshakuji, aka Yamadera (literally, mountain temple), is a large scenic temple located on Mount Hoju outside of Yamagata City. 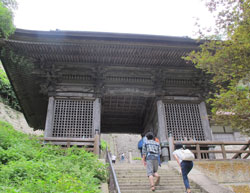 To encourage us during the long climb up the temple’s many stairs, a staffer told us that making a wish and concentrating on it as we climbed would guarantee it being granted when we reached the top.

The hike up was fun and there are many attractions to see along the way, including a stone sculpture on a cliff wall and a lot of stone towers and monuments. Each attraction provided us a chance to stop and catch our breath.

After about 40 minutes of hiking up the steep stone stairs, we finally reached the main hall and Godaido, the observation hall. The panoramic vista from the hall over the cliff onto the pastoral valley was simply fantastic and breathtaking. I felt as if time had suddenly stopped as I looked down into the valley filled with rice fields in a golden state as harvest approached, along with villages of traditional black wooden houses with grey tile roofs surrounded by beautiful green steep mountains. The view, I believe, has not changed much since the ancient ages.

After climbing down from the temple, we walked along the street packed with shops selling local delicacies, treats and crafts, including naturally dyed silks, wooden toys, iron and pottery pieces.

Shomyoji Temple’s red wooden gate is a pleasant site at the entrance of the 750-year-old grounds.

Two 10-feet-tall, fierce-looking wooden statues of guardian gods on each side of the inner gate scowl as people pass through. The signboard says the sculptures were created and installed in 1323 and nominated as important cultural asset of Kanagawa Prefecture. 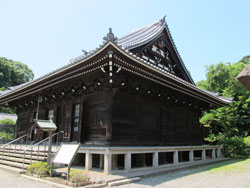 The temple is host to a large pond and peaceful Jodo-style garden. The temple garden reflects the paradise of Buddhism, according to the temple’s documentation.

The peaceful and quiet setting of the old wooden temple buildings in the garden seem to reflect the peaceful state of mind. Shomyoji Temple offers a calm atmosphere fit for a pleasant stroll.

A pair of lion-dogs guard the entrance of Japanese shrines

A pair of lion-dogs guard the entrance of Japanese shrines