Chances are, before Japan, you may not have heard of The Moomins. A Finnish children’s book series-turned-TV-cartoon, Moomin is based on the adventures of a family which resembles animated hippopotamuses and is wildly popular here. 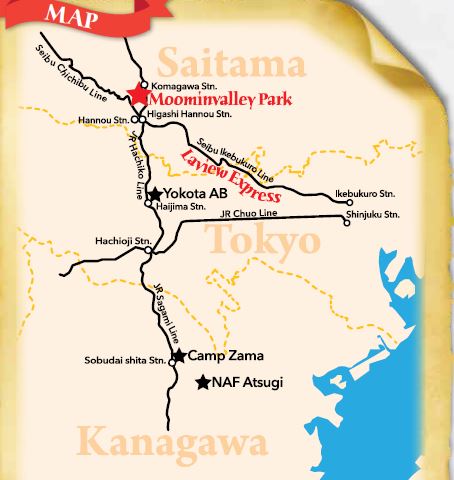 You’ll find all kinds of merchandise dedicated to the many characters at just about any novelty store, as well as plenty of cafés serving up Moomin-themed entrees and desserts.

The Moomins, created by Finnish illustrator Tove Jansson, gained popularity in Japan when the series hit the TV in the 1960s and 70s. Today, the characters instill nostalgia for many 40- to 60-year-olds.

A new attraction, however, is now bringing The Moomins and their storybook setting to life a few hours north of Tokyo. Moominvalley Park opened in Saitama Prefecture in March, 2019 and is already drawing crowds to its forest and lake setting.

Visitors can now meet the main character, “Moomintroll,” or “Moomin” for short, his parents, “Moominpappa” and “Moominmamma,” and his friends, “Sniff,” the Snork Maiden, “Snufkin” and “Little My” in person.

“There are a lot of people who know The Moomins, but few remember the story,” says Takashi Fujii, spokesman of the Moominvalley Park. “So, I believe the newly built park can help them to reminisce and recall their fantastic stories.”

There are many options to get there: by car, if you’re at Yokota, or via express train if you’re at Zama Atsugi or Yokosuka (see note in the info box).

My wife and I tried the express train, which begins its journey in Ikebukuro in Central Tokyo to Hanno Station and takes less than 40 minutes. 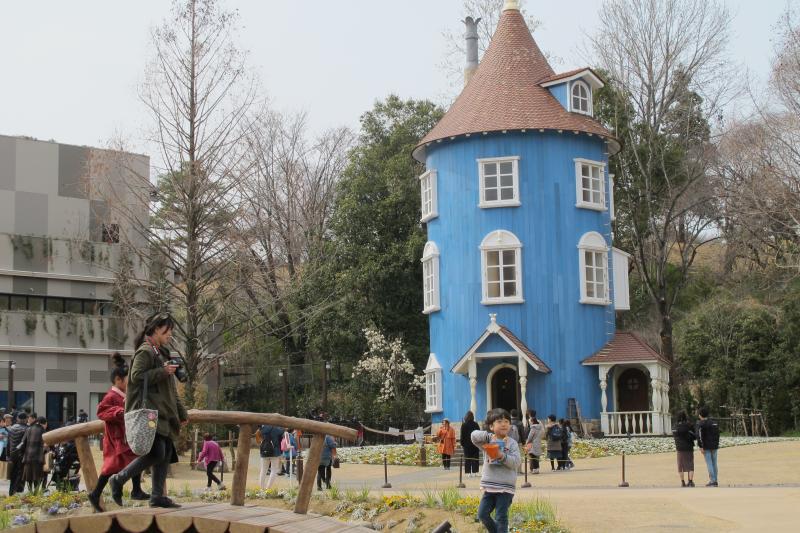 As soon as we arrived at Moominvalley Park, we were transported into the cartoon. Using the lush forest Saitama is known for and Lake Miyazawa as its backdrop, the park’s buildings and surroundings were just like the ones from The Moomins.

The park is split into two areas: Metsä Village and Moominvalley Park. Metsä Village is an admission-free zone where visitors can shop Nordic products and local vegetables, eat at the cafe and enjoy canoeing or ziplining over the lake.

We entered the Moominvalley Park area and could see The Moomins’ bathing hut over the lake, and Moominhouse, another one of the family’s homes. Along with large windows, light-colored walls and tall ceilings, the buildings at Metsä Village and inside the park itself, had a very Scandinavian feel. 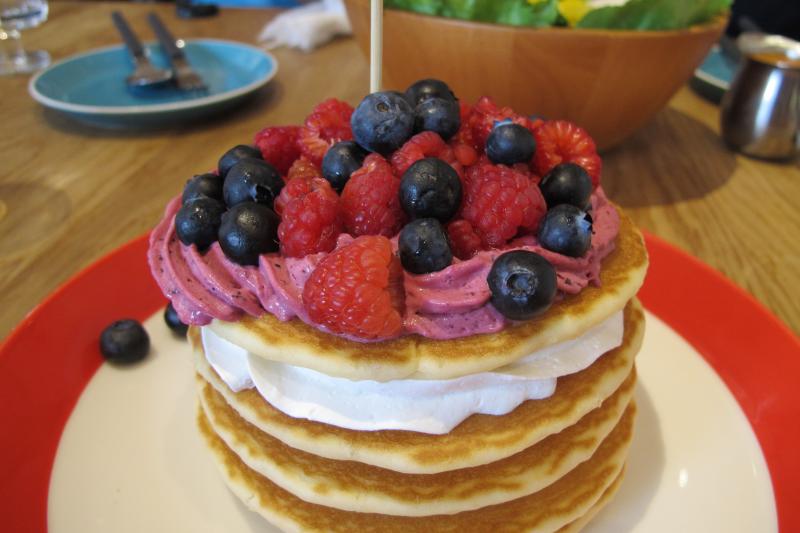 We spent a lot of time at Metsä Village so by was time for lunch. We headed straight to the Lettula Pancake restaurant.
Lattu (pancake) is Moominmamma character’s staple dish and one the character always carried in her basket when the family would go off on another adventure.

I went for the Very Berry Lattu (pancake) for 1,600 yen ($15) and my wife ordered a savory spinach and bacon Lattu for the same price.

The gigantic five-layered pancakes generously topped with strawberries and blueberries overwhelmed me. But they were warm and soft, complimented by the fresh berries, butter and cream. Blueberry sauce flowed as I cut into the pancakes. According to a server, the dishes at the restaurant are enough to serve nearly two people.

My wife’s savory pancakes were bright green as the batter had spinach mixed in and came topped with bacon and an egg – sunny side up. A side of maple syrup gave the dish a slight sweetness to it and overall the dish was quite tasty.

After those hearty pancake servings, a walk through Moominvalley was in order. The various attractions were abuzz with schoolchildren on field trips to the park.

The blueberry-colored Moomin House, the centerpiece of the park, gives you a look into Moomin’s five-story home. A main shopping and museum facility, Kokemus, offers the largest selection of Moomin goods for purchase.

We tried the Ocean Orchestra, a digital and musical art interactive which took us on an adventure with Moomin and friends. The projections went over the audience and the room to give us the effect of being aboard an old-fashioned sailboat plowing through rough ocean. 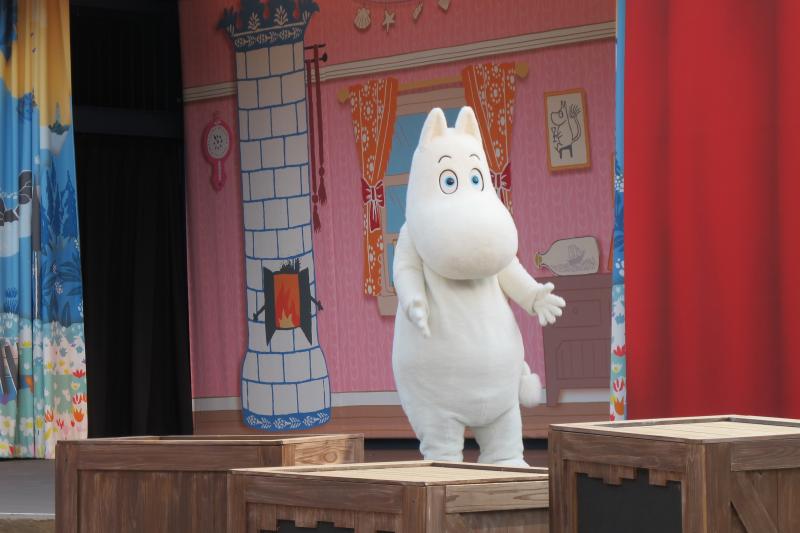 After, we met some of the characters who were walking around the park for meet-and-greets and photos.

We made our way to Emma’s Theatre, an outdoor theater with grass seating, for a 30-minute show featuring all the characters. This adorable performance reminded me of my childhood watching the cartoon on TV.

The many attractions coupled with the impressively-accurate architecture did a good job of taking us to the Moominvalley of my memories.

We enjoyed our visit to the park as it wasn’t like other typical amusement parks. Moominvalley blends into Saitama’s landscape and coexists with the rich, natural beauty of the lake and surrounding forest.

It is through this environment where one can connect with the world of The Moomins and it is also another opportunity to experience the beautiful nature Saitama has to offer.

Even if you’re not familiar with this Finnish cartoon, this place will charm you and your family and maybe even turn you into a Moomin fan too.


*Notices and requests to visitors 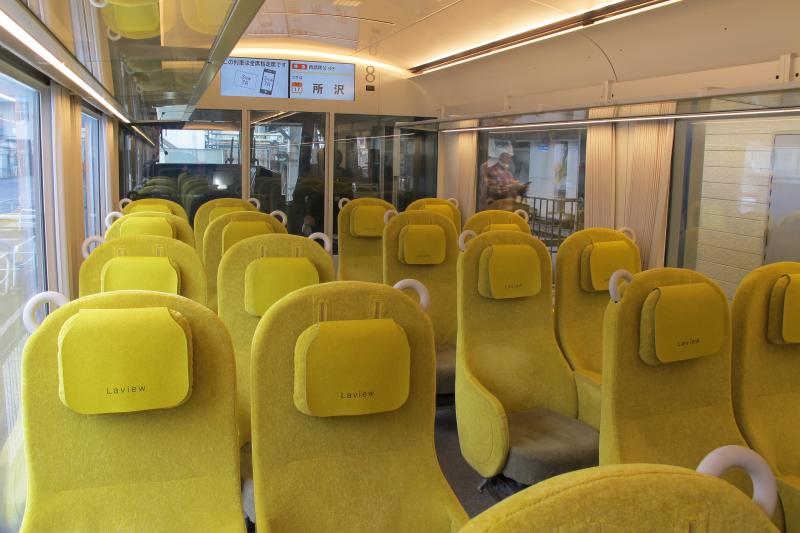 A new limited-express train is making it easier to connect with nature North of Tokyo. If you’re located in Yokosuka, Atsugi or Zama, this train may be a good option for your next trip for a little R&R.

“Laview” is a train on the Seibu Line connecting Ikebukuro Station in Tokyo and Chichibu in Saitama Pref. via a 78-minute ride. To get to Hanno Station (where Moominvalley calls home), it’s a 39-minute ride on the express.

In addition to the velocity and fewer stops along the way, the new train has large windows, a soft yellow-hued interior and large plush seats offering a comfortable ride. Each seat is equipped with an electrical outlet, and free Wi-Fi is available in each coach. Large 23-inch onboard video screens display information in four languages, Japanese, English, Chinese and Korean. This train ride was so comfortable in fact, that we wished our destination were further so we could stay on longer as we arrived at Hanno
Station.
Just as impressive as the inside, the exterior of the train designed by a renowned Japanese architect Kazuyo Sejima,
features a rocket-like silver body and rounded windshield.

This train is a dream and will get you to Moominvalley and all the wonders of Saitama faster than ever.