Every year in Japan, Tanabata festivals around the nation are hosted in celebration the annual meeting of two star lovers, Vega and Altair. According to the legend with Chinese origins, the two stars are separated by the Milky Way and only allowed to meet once a year on July 7.

Also known as the Star Festival, this is one of the most romantic festivals of the year. Misawa will celebrate its Tanabata from July 26 to July 28. Though it is usually held on the seventh day of the seventh month, some regions including Aomori, Sendai and Akita celebrate it in accordance with old lunar calendar’s date which this year falls on Aug. 7.

The city’s main street, from Omachi Shopping Arcade via America Hiroba, up to Misawa Air Base Gate and Misawa City Hall, will be closed and beautifully decorated with colorful bamboo branches and ornaments. Write your wish on a slip of colored paper called tanzaku, then tie it to one of the bamboo branches. It is believed that the two star lovers will grant the wishes tied to the branches.

The festival features many food and drink booths, plus a variety of performances. Attendees can expect a brass band, traditional dancing and a live concert from a special guest not yet announced. Other activities like a dance contest, bingo, 3-on-3 basketball demo, and more will also take place at the festival.

Go for the chance to have your wish granted and to partake in this esteemed tradition but stay for the entertainment and great food! 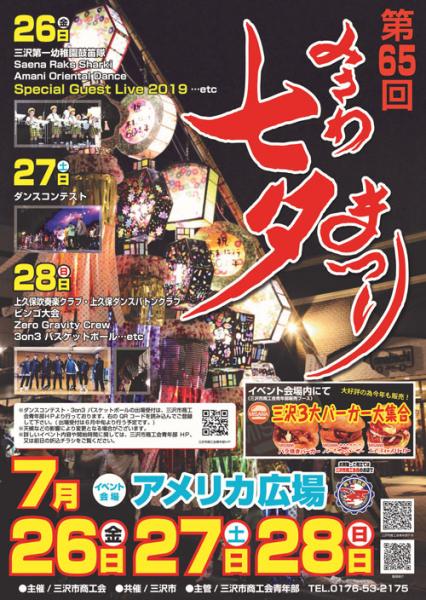