Located in the central basin of mainland of Japan, the elegant castle city of Matsumoto is surrounded by beautiful plateaus and the towering Japanese Alps.

Since Matsumoto castle was built in the 17th century, the city has developed into a city blessed with rich history and culture. Its castle and traditional town atmosphere, along with hot springs and tasty local foods attract many tourists, and the city is often considered one of the most desirable tourist destinations in the central mountainous region of Japan.

En route for a two-night trip, my wife and I reached the city after three-and-a-half-hour drive from Yokosuka. The well-arranged town and streets impressed us. 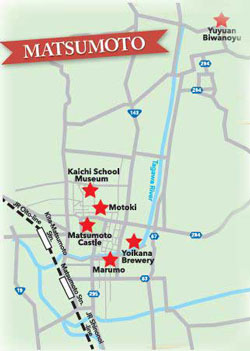 It was rather modern and fashionable compared to other typical traditional castle towns.

Since the main attractions were packed in the center of city, we were able to check out most of them on foot during the two days.

Just like other cities of Nagano Prefecture, Matsumoto boasts of tasty apples and soba noodles. We enjoyed the local products while strolling through the city.

We also found most eateries in the city offering local delicacy “sanzokuyaki” (literally, bandit grilled). Our hotel breakfast even included this local dish. A sort of fried chicken, the taste was much smoother and richer, mainly because it’s marinated in broth made from garlic, ginger, soy sauce and mirin for a couple of days before it is fried.

Also known as Fukashi Castle, Matsumoto Castle is a good-sized black castle with a 5-folded and 6-storied donjon tower - the oldest in the nation in its original condition. Since its foundation in 1614, the castle has been a stately landmark at the backdrop of the Japanese Alps. 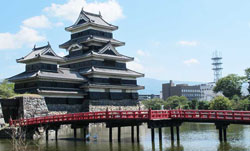 Today, it is registered as a national treasure and considered one of Japan’s three most beautiful castles.

While touring in the donjon, we were able to view the original castle structure and furnished strategic equipment and devises.

Exhibitions on each floor gave us a greater sense of the history of castle and battles of feudal Japan.

After climbing up to the top, we were able to look down on the city along with the beautiful mountains. 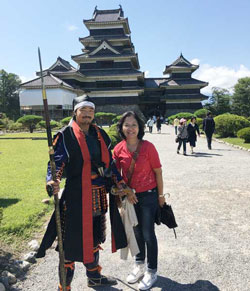 
One of oldest schools now a museum

After the castle, we visited a classical school building built with a mixture of Japanese and Western architectural styles.

Founded in 1873, Kaichi Gakko (school) is one of the oldest elementary schools in the nation.

After 90 years of active use, the school building was designated as an important cultural asset of modern architecture and was preserved as a museum in 1961. The museum displays various old textbooks, diaries and certificates, along with the building’s architectural facts.

Preserved student’s desks and chairs, blackboard and teacher’s podium gave it an authentic feel. We took many photos posing as if we were elementary schoolers. 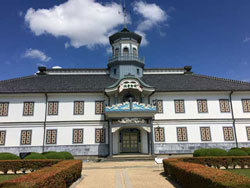 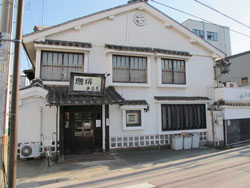 Throughout our stay in the city, we enjoyed strolling on the traditional Nakamachidori and Nawatedori Streets that are lined with clay-walled warehouse-style buildings with black plaster walls and tiled roofs. Although the city has experienced several large fires, many of the wooden buildings are still in their original condition from the Edo Period.

To my surprise, these structures are not only preserved as historic assets, but they are actively used as shops and restaurants after having been renovated. We were able to take a close look inside and outside of the historic buildings while shopping or enjoying our coffee and sweets at different shops.

We dropped by Marumo, the oldest and most popular café housed in one of those traditional storehouses. Built in 1868, the interior was furnished throughout with Matsumoto folk furniture, producing a relaxing and historical atmosphere. 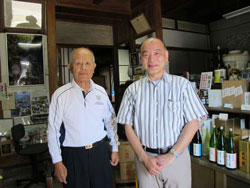 Located one block off the Nawatedori Street, a sake brewery, Yoikana Shuzo, has offered high-grade sake for centuries. Its quality sake is known nation-wide and has been awarded at various national food competitions.

“This spring water is very soft and smooth - just great for brewing high-quality sake,” Hodaka said. “As 70 percent of sake is made up of water, the quality of water determines the quality of brewed products.”

We were able to sample several different types of sake at the brewery. Its daiginjo (top-quality sake brewed from rice grains milled to 50 percent or less) had a superb fruity flavor while yamahai junmai (traditional pure rice sake) had a kind of full-bodied, strong taste. Both were very rich and tasty, and I could not help but purchase bottles as a souvenir before we left. 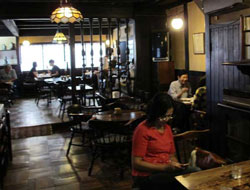 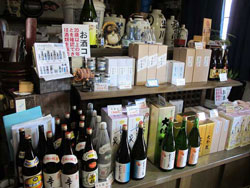 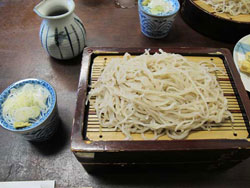 Upon entering through a façade with eye-catching brown banners with the name of “Motoki” in hiragana lettering in white, the interior is wide and cozy.

Getting on a tatami floor, we ordered mori soba (cold buckwheat noodle) for 1,300 yen and tempura soba for 1,700 yen.

Soba noodles usually are dark gray, but that of Motoki was crystal clear. According to a staffer, they ground selected buckwheat produced by local farmers into 30 percent. By getting rid of gray layers of the buckwheat seed, it became a beautiful transparent white.

The flavor and texture of noodles were different from the soba I’ve had before. The pleasant aroma of the noodles spread through my mouth the more I chewed. The chewy yet extremely sweet and smooth flavor stood out in the refined soy-based broth. The shrimp and vegetable tempura were hot and crispy and went well with with the high-grade buckwheat noodles and broth. 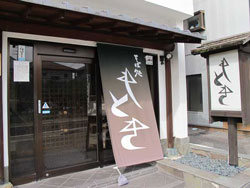 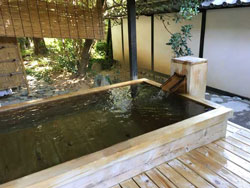 No visit to Matsumoto would be complete without soaking at a hot spring full of history and rich tradition.

Biwanoyu (literally, hot water of loquat), located in eastern part of Matsumoto (15-minute drive from the castle), is known as a hot spring for feudal lords. Since it was founded by Ishikawa Clan, the residents of Matsumoto Castle, about 400 years ago, this hot spring was exclusively entitled to only feudal lords throughout the feudal age.

But today, fortunately, anyone can enter the traditional bathing facility for the admission of 800 yen ($7). It is an ideal place to wrap up your trip to Matsumoto.

The transparent hot spring is said to be great for not only stiff shoulders, but also curing rheumatic diseases, gastronomical troubles and external wounds.

Separated bathing halls for male and females each an open-air bathing pool.

When I entered the hall in early afternoon, there was nobody soaking in the bath, and I was able to enjoy soaking in extremely smooth hot water for a while. The view of a well-maintained traditional garden was gorgeous, and I surely felt like I was a feudal lord.

The facility accommodates restaurants, shops and resting space where various things relating to feudal lords who used the bathing facility were displayed. 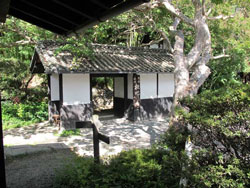