With superb scenic views made up of pristine forest and crystal clear water, Lake Towada and the Oirase Mountain Stream are known as two of Japan’s most popular tourist destinations.

Part of Towada National Park, these attractions are especially famous for their brilliant shades of red, yellow and orange around late October through early November. But, the area isn’t just known for its one season. On top of autumn, they can both be enjoyed throughout the year, with fresh green leaves in summer and snow in the winter.

As these attractions are located in the central mountainous region of Aomori Prefecture, about one-hour drive from Misawa AB, they are easy to reach as I recently did. 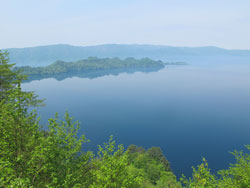 The most beautiful mountain stream in Japan

Driving for an hour from Misawa AB, I reached the Oirase Mountain Stream, known as only the outlet from Lake Towada and the most beautiful mountain stream in the nation.

Being a popular tourist’s attraction, there were many cars and tour buses at the stream at 7:30 a.m.

Although the Towada Tourist’s Bureau suggests 4-5 hour of hiking along the 8-mile gorge may be the best way to appreciate the beauty of the stream, I found that driving along it in the forest was a very refreshing experience.

If you choose to hike along the stream, there are buses that run alongside that are available should the weather turn on you.

Despite its location in the pristine forest of white cedar, beech and maple trees, well-paved roads run along the stream. The smooth ride went along well with the picturesque mountain stream of greenish water and white splashing in the forest of lush green leaves.

Halfway down the stream, I found a large parking lot and visitor’s center at Ishigedo. I parked and decided to take a stroll along the stream. I saw a large flat rock, which was tilted over a couple of old trees, called Ishigedo (literally, door of stone). Legend goes that a female burglar used to live in the cave between the rock and trees in those days. Its unique and somewhat spooky appearance actually reminded me of the legend.

The streams showed various looks as I proceeded to stroll. The crystal clear green water around Ishigedo ran relatively slow through various shaped rocks covered in green moss showing me the calm and celestial look of stream. On the contrary, white splashes in the swiftly moving rapids around Kumoi Falls impressed me with their wild and a somewhat threatening look.

Walking along the ever-changing stream with a background of fresh green leaves shimmering in radiant sunshine made me feel as if I had strayed into a different world.

As I continued my stroll, I saw dozens of waterfalls cascading down into the stream, including 82-foot-high Kumoi Falls, the largest waterfall in the gorge, and Tamasudare Falls.

Getting an up close view of the waterfalls, the dense green vegetation, and the ripples in the river provided a pleasant and memorable experience. 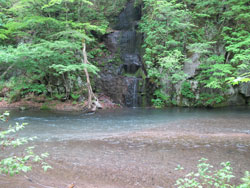 Having driven the rest of stream, I was able to follow it to where it actually connected to Lake Towada at Nenokuchi.

This was a sight to be seen. I was moved and overwhelmed to see the bright blue water of lake!

I drove on the hilly road up to the observatory named Kankodai (literally, overlook lake platform) to get a good look down on the water.

The view from the platform was breathtaking. I saw the mysterious bright blue water spread to the horizon. The lake looked circular with two peninsulas extending from left and right side of the Kankodai Observatory into the center of the lake.

While water of Oirase stream looked green, that of Lake Towada was a beautiful bright blue. I wondered what caused the difference between the two attractions, and why the lake has such an impressive color.

A sign at the observatory explained that the lake is no less than 1,073 feet deep, the third deepest lake in Japan, and the significant depth and extremely clean water gave the lake its mysterious beauty. In fact, the water is so clean and translucent that you can see more than 33 feet below, according to the sign.

The surface area of the lake is 15,100 acres, one of the largest crater lakes in the nation.

Besides Kankodai platform, there are three other observation points set up around the lake, so you can enjoy the lake’s appearance from different angles. Seeing the lake from a boat shows a different kind of beauty than can been seen from the lakeshore, according to Towada Tourist’s Bureau.

After I enjoyed the view, I drove to Yasumiya, a lakeside town and home to a visitor’s center, shops and hotel facilities, as well as the famous “The Maiden Statue” by noted sculptor Kotaro Takamura.

I strolled along white beach of the lake. I saw vivid green grass and small yellow flowers spread from the beach to the park garden.

I was alone, except for a crane resting on the beach. When I approached, it flew off into the sky. The white wings created a great contrast against the backdrop of the blue lake. Standing there on such a fantastic beach, I felt as if I was dreaming.

Hike along Oirase Mountain Stream near Misawa Air Base