Japan is home to many majestic castles. They are symbols of the country’s history, culture and pride.

Showcasing some the nation’s most traditional architecture, they conjure images of samurai and warring feudal lords. For many today, they are picturesque backdrops for viewing cherry blossoms and autumn foliage. But perhaps most of all, they are monuments to regional heritage.

Castles exist in virtually everywhere in Japan - from the northern island of Hokkaido to the southern island of Okinawa. In all, there have been more than 40,000 castles built here according to historical documents. While most have been destroyed and/or rebuilt repeatedly throughout history, there still are more than 1,000 castles, partial castles or castle ruins today.

Originally, castles were built in strategic locations along trade routes, main roads or rivers. Over time, they developed according to the types of arms used in battle. Eventually, they evolved into the well-known style of the late 16th to the early 17th centuries with three to five stories, tall towers, large stone walls and moats.

Most of these castles have been rebuilt as regional heritage sites or museums.

Among the hundreds of castles and ruins, the following are some of my most favorite ones. As it is not hard to find a castle or two standing tall near your base, you should make it a point to visit one to experience the culture and pride of its palatial past. 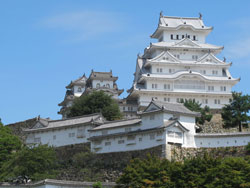 Nominated as a UNESCO World Heritage site, Himeji Castle is one of the most majestic and the most beautiful traditional castles in Japan. While most of Japan’s castles were used as recent wartime bases, most were bombed and later rebuilt. So, this castle is one of a very few to have remained standing after World War II. Passing through the castle’s main Otemon Gate into its surrounding park, I was impressed with the bright white tower that fronted it. In fact, the entire castle is nicknamed White Heron Castle because of its color. It is even more fitting now, as recent renovation had added fresh white plaster to parts of the tower and its new roof tiles. Now you can see what the tower originally looked like. The castle, which was built in 1609 by Ikeda Terumasa, actually is comprised of 83 buildings, including the must-see “hyakken-roka” (600-foot corridor) with various rooms displaying complex defenses, such as hidden shooting holes and areas from which soldiers could throw rocks and pour boiling oil or hot sand. It took us a couple of hours to tour the castle. It has steep slopes and stairs, so be prepared to do quite a bit of walking. There were lots of volunteer guides on hand, some who spoke English. To my surprise, some were dressed as armored warriors, castle guards and ninjas. My daughter asked a ninja to pose with her for a photo. He responded with a sudden fighting pose, produced a throwing star as a gift, then motioned for me to take a snapshot of them with the castle tower as a backdrop. It was a great shot. 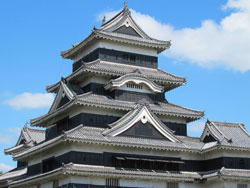 Also known as Fukashi Castle, Matsumoto Castle is a well-proportioned black castle accommodating a majestic 6-storied donjon tower, the oldest one in the nation that is in its original condition. Since being built in 1614, the castle has been a stately landmark with a backdrop of the Japan Alps. Today, it is registered as a national treasure and considered one of Japan's three most beautiful castles. While touring in the donjon, my wife and I were able to see the original castle structure and furnished strategic equipment and devices. Displayed exhibits on each floor a look at the history of castle and battles of feudal Japan. At the top, we were able to look down on the city along with the beautiful mountain ranges of the Japan Alps. 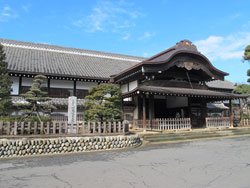 Although the castle is considered a symbol of the Kawagoe feudal domain, most of the castle’s structure, such as the donjon, walls and moats, were demolished when the feudal era ended in the late 19th century. Only the main part of the castle is preserved and open for public access. When my wife and I visited, the 170-year-old grey roof and the majestic building allowed us a glimpse into history. We took off our shoes at the entrance and entered the building, looking around the various rooms, including the grand hall with gorgeous pictures on the walls and the drawing room with its low ceiling, which was designed to help prevent sword attacks. Tiny stations where samurai warriors would have hid or stood by on alert while the Lord met guests give an idea of the look of a typical castle. When we entered the chief councilor’s office, a curator approached us and explained the history of the castle and town. Kawagoe was strategically important for Edo (old Tokyo), due to its location 25 miles north of the feudal capital and its function as a citadel to guard against enemy attacks. Shoguns installed some of the most loyal men as lords of Kawagoe Castle throughout the Edo Period (1603-1867). Thus, Kawagoe inherited many aspects of the Edo culture and architecture, leading it to be known as Koedo (Little Edo) after the old name of Tokyo. Kawagoe boasts the third largest number of cultural assets in the Kanto Plains after Kamakura (Kanagawa Prefecture) and Nikko (Tochigi Prefecture). An estimated, 6.2 million tourists domestically and internationally visit the city every year, according to the curator. 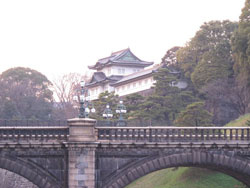 Edo Castle was capital of the Shogunate government in Edo (Tokyo) and the home castle of the line of shoguns who ruled Japan for 260 years. It was originally built in 1457 by Ota Dokan, a feudal lord. Since Tokugawa Ieyasu established his Shogunate Government in Edo, the castle became a symbol of the prestige of successive shoguns, and was also the center of political power. Nicknamed “Chiyoda-jo” (thousand-year-old rice field castle), this is Japan’s largest castle, with the inner compound measuring roughly five miles in diameter, and the outer compound is 10. Although it is currently used as the imperial palace of the Emperor of Japan, many parts are open for public viewing. You can see original gates, such as Otemon and Shimizumon, turrets, the five-story tower, and bridges such as Otebashi. 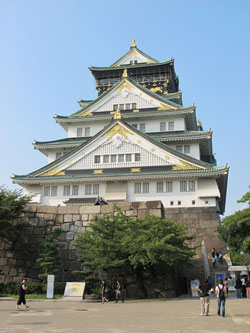 Considered Osaka’s landmark, the current eight-story Osaka Castle is a concrete reproduction (with elevators) of the original. The interior was built as a modern functioning museum, which displays various exhibits on each floor. The displayed exhibits range from the castle’s facts and figures, details on its founder, Toyotomi Hideyoshi, and other events of that era including miniature battle scenes of historic wars. The original castle was built by Hideyoshi in 1597 as a base for his campaign for national unification, and a show of power and authority. However, it was burned down in 1615 after his death during Osaka’s Summer War by another leading lord, Tokugawa Ieyasu, who later became Japan’s first shogun. The castle was reconstructed in 1931. In addition to the vast museum collection, the vista from the eighth floor of the castle is amazing. After exploring the castle interior, you can also stroll around the castle walls and moats. The sheer size of the facility is a testament to the former power of Hideyoshi. 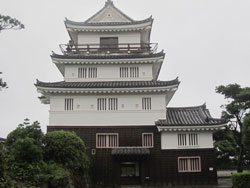 As soon as I drove across the 2,188-foot-long Hirado Bridge and got onto the island, a sign pointed me toward of Hirado Castle, so I followed. It is a must-see attraction. Besides its majestic white appearance on the hill behind the port, this five-story building gave me a good view of the whole town and harbor against a backdrop of blue sea and the Matsura Peninsula. Not only was the view impressive, but it also helped me plan an effective walk around the town. The inside of the castle was used as a museum, and I was able to learn about the history of Hirado from the various artifacts and documents on the Matsura clan. The Matsura were the owners of the castle and governed the region throughout Japan’s feudal era. As Hirado is located on the western tip of Japan, its connections with China and the Korean peninsula date back more than 1,000 years. However, Hirado’s most glorious history as a flourishing trading port started in 1550 when the first Portuguese ship arrived. Known as Firando at the time, this port town was Japan’s main international trading port for 90 years until the nation instituted its closed-door policy in 1641. I found it interesting that this majestic castle was built in 1718, long after Hirado’s golden age had passed.

Beat the heat at these water parks and pools in Japan