Is it possible to have fun for free? Well, in Osaka it certainly is! In Osaka, there are 10 spots where you can do just that. If you've ever wanted to travel, but worried about your budget, check out these great outing spots recommended by locals - that you can visit absolutely free! Get ready to add great value to your trip, all for zero yen.

1. Tennoji: Enjoy the Celebration at Shitennoji, the Oldest Temple in Japan! 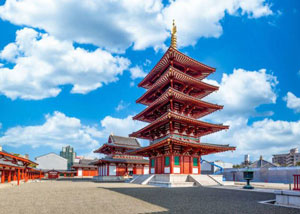 Shitennoji is Japan's oldest government temple, with a history of over 1,400 years. A government temple is a temple that has been sponsored by the country. Shitennoji was built by Prince Shotoku, and is even found in the records of the history book, The Nihonshoki, written during the Nara Period. There is a fair held on the 21st and 22nd of every month, which is the monthly anniversary of the monk Kukai and Prince Shotoku, with many stalls to visit. There is also the paid-entry Gokuraku Jodo Garden, where you can see the gorgeous scenery of Abeno Harukas from inside the Japanese garden.

2. Tenma Mint Museum: Check Out Rare Coins and Medals! *Closed Due To Coronavirus

The mint bureau manufactures Japanese coins and medals. At the Mint Museum, you can see both domestic and foreign currency, rare coins and medals, and even observe the manufacturing process. You can also make a reservation to visit the factory of the main headquarters, and watch the currency making process as it goes through the passage. "Sakura no Torinuke," also known as "Sakura at the Osaka Mint," is an event held every spring, and a popular spot to enjoy the cherry blossoms.

The skyscraper building, Abeno Harukas, boasts a height of 300 meters. It is a commercial building full of department stores, restaurants, and museums. On the 16th floor is the ticket counter for the pay-per-view observatory, Harukas 300. The viewing space is about 80 meters high.

There is also an outdoor garden that you can enjoy free of charge. Look out over the buildings of Osaka below while surrounded by the open air atop the building. If the weather is nice, you can sit on a bench and relax.

The highlight of Namba Yasaka Shrine is the giant, 12-meter-high lion's head statue. The lion's head is also an impactful, popular photo-shooting spot. It enshrines the ten pillar gods, including Susano-no-Mikoto, and is said to bring good luck, including money, protection from disease, and a happy marriage. Stroll freely through the precincts, and get yourself some original amulets and omikuji fortunes. 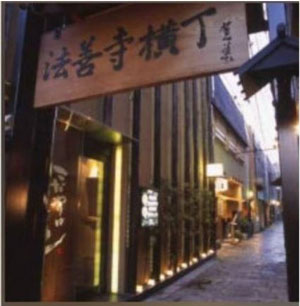 Hozenji Yokocho is a cobblestone alley that extends from east to west near the downtown Namba area. The lanterns at the gates on both ends, decorated with the name 'Yokocho,' are places where you can truly feel the spirit of Naniwa, or old-fashioned Osaka. Both ends of the alley are lined with gourmet spots full of delicious okonomiyaki, kushikatsu, and fugu (puffer fish) restaurants. Mizukake Fudoson is another popular and auspicious spot, located in the precincts of Hozenji, from where it got its name. Don't forget to pour water on the mossy, green Fudoson statue for good luck!

Ebisu-bashi is located over the Dotonbori River, which crosses the downtown area. The neon Glico sign can be seen up close from the bridge, and makes a great commemorative photo. You can access the Tombori River Walk, a walking path along the river, from the stairs at either end of the bridge. There are also shops along the Tombori River Walk that you can enter from the promenade. At night, the neon lights are reflected on the water's surface, which adds to the gorgeous atmosphere of Osaka.

Shinsekai is the downtown area located at the corner of Osaka's symbolic tower, Tsutenkaku. The entire city looks and feels like a theme park, and is a popular tourist hot-spot where you can enjoy the feeling of being in retro Osaka. There are other great photo spots besides Tsutenkaku, such as the huge pufferfish billboard, the statues of Billiken, and other "funny" sights that are unique to Osaka. You can also enjoy delicious local dishes such as kushikatsu and sushi in the nearby shopping street, Jan-Jan Yokocho. 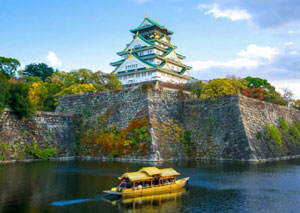 Osaka Castle Park is centered around Osaka's symbolic Osaka Castle. The castle was originally built by Hideyoshi Toyotomi, and was rebuilt in 1931 through donations from citizens. In addition to the historic buildings such as the castle tower and watchtower, there are also plum groves and gardens, which are famous cherry blossom viewing spots in the spring. You can also enjoy the delicious gourmet of Osaka in the surrounding area, Jo-Terrace Osaka, another must-visit during your sightseeing trip.

Built in the middle of the 5th century, this is the world's largest burial mound, the tomb of Emperor Nintoku Tennou, 'Mozu-no-Mimihara-no-Naka-no-Misagi' (or the Mozu Tombs for short). It is one of the three greatest tombs in the world, along with Egypt's Pyramid of Khufu, and China's Mausoleum of the First Qin Emperor. Although the interior is not open to the public, you are allowed to walk around and look at it from the outside. You can even view the old burial mounds for free from above from the nearby Mikunin Hiroba, and the 21st Floor of the Observatory Lobby in Sakai City Hall.

The Cup Noodles Museum is a memorial hall built in the birthplace of the world's first instant ramen. There is a corner where you can learn all about the history of ramen through theaters and quizzes, and a ramen tunnel where you can see about 800 different types of packages by period. There is also a popular paid experience corner, where you can make your own original cup noodles. In the museum shop, you can also buy original goods.

Spider lilies kick off the fall season in Japan