Divided by a rigid caste system until the Meiji Restoration, Edo was stratified between those who lived in Yamanote, the lords and samurai, and Shitamachi, the more common classes such as craftsman and merchants. Shitamachi means “low town” which refers to low-lying land near the Sumida River and includes cultural hotspots such as Ueno, Asakusa and Akihabara. Though the caste system ended people didn’t up and suddenly move on up, but continued to live, work and be amused as they always had in Shitamachi.

A good place for a snapshot of an average Tokyoite’s life in the early 20th century Taisho-era is the Shitamachi Museum by Shinobazu Pond and Ueno Park. 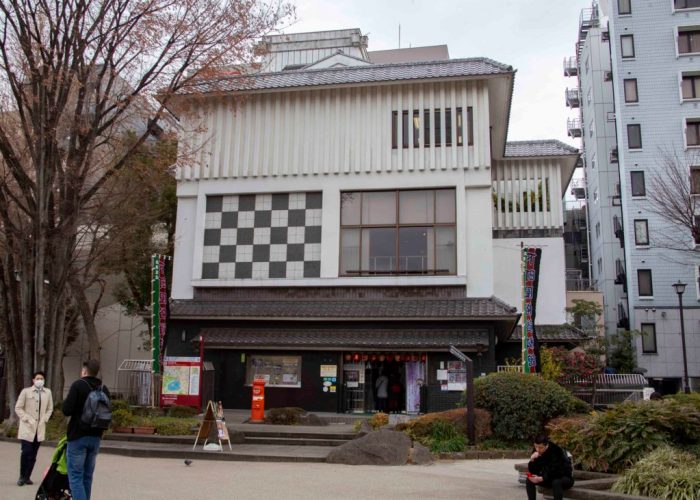 The Taisho-era (1912-1926) marks the relatively short reign of Emperor Taisho (1879-1926) when Japan caught up with the rest of the Western world. The nation became a functional democracy, fashion and fads from around the world were now just as at home in Tokyo as they were in Paris or New York and liberal ideas were openly explored. Technologically, Japan began producing marvels such as the world’s first purpose-built aircraft carrier in 1921.

Shitamachi Museum recreates a nagaya neighborhood from this time period and shows how this modernity wasn’t really reflected in the lives of many Tokyoites. The ubiquitous nagaya was Tokyo’s timeless housing for the lower classes. Long wooden row houses dissected into thin homes, businesses and workshops divided from more of the same by narrow alleyways (the museum’s is little more than a covered drainage ditch) by the Taisho-era the only thing that had really changed since the first Tokugawa Shogun in1600 was the advent of electricity (for some) and some new style clothes tucked away with the kimonos in the old closets. 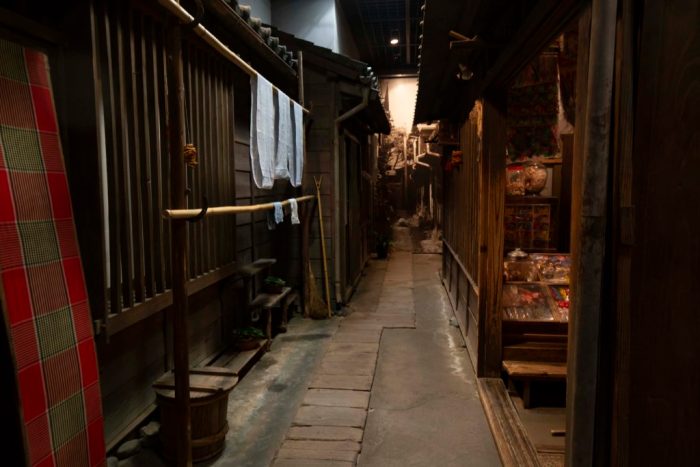 The recreated neighborhood is centered on a dagashi-ya (candy store) and doko-ya (coppersmith’s workshop). They are night and day styles of home business that show off how a merchant and a craftsman would make use of their limited space for work and using the remainder for living. Imagine living in a closet with your spouse and kids where you unpack what you need for that time of day, but then have to repack it and unpack something else to change the room’s function. On the other side of a flimsy wall is another family in their closet doing the same thing and/or banging on copper.

A museum tour guide is necessary to get the most out of the nagaya as she will share with you all of its secret spaces and little ways people made the most of every inch and item within these homes. Simple as they are each is packed with personal touches to make them feel lived in and she can explain it all. English handouts at both homes also go into detail about what you’re seeing in an easy to follow manner if you can’t spare the 20 minutes for a tour. 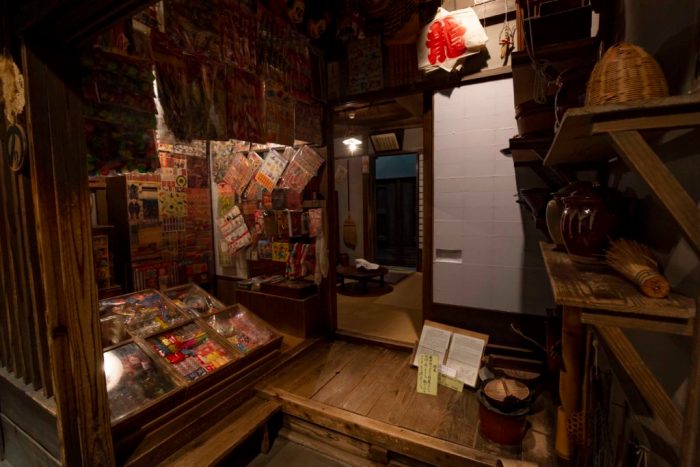 The neighborhood is completed with a communal well, bulletin board and tiny shrine. We can just after New Year’s and so got our New Year’s fortunes from the shrine.

Before cramming people in blocks of multi-story apartments and towers to give Tokyo Japan’s highest population density, these tightly packed and highly flammable nagaya were how the city earned the dubious distinction. Sadly, Shitamachi and most of old Tokyo was almost completely destroyed by the 1923 Great Kanto Earthquake which left 70,000 dead and major sections of the city reduced to rubble and ash by the quake and subsequent fire. More than 90% of the deaths were attributed to the fire.

Upstairs has a recreated 1960s living room that shows how after so many centuries of sameness life had begun to change. The house now has running water and electricity, but the tiny kitchen is still in the entryway. The floors are still tatami, but the furniture is now immobile because the living room is only a living room. It’s worth pausing and reflecting what is similar to what we grew up with in the U.S. but contrasting with the vestiges of tradition that the home is still built around. 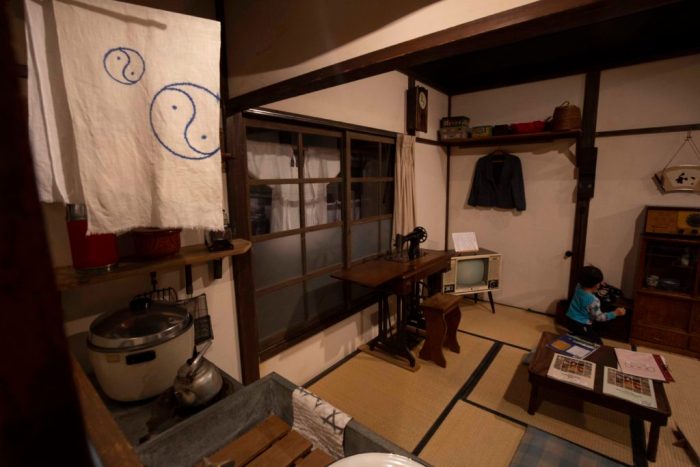 Overall, upstairs is a bit all over the place with no narrative but little interesting bits of Shitamachi culture, especially the entertainment side. Ueno’s fellow Shitamachi neighborhoods Yoshiwara was Edo’s go-to red light district and Asakusa was Edo/Tokyo’s favorite (legit) nightlife and theater district where one could watch a play before that past time gave way to the movies. An impressively large wooden model of the Edo-era Yoshiwara brothel Miura-ya, complete geisha procession, is the room’s current centerpiece.

After seeing how the common man lived (and… amused himself) in the Taisho-era we took the subway to Asakusa, the next stop over from Ueno, to experience how he drank at Kamiya Bar. 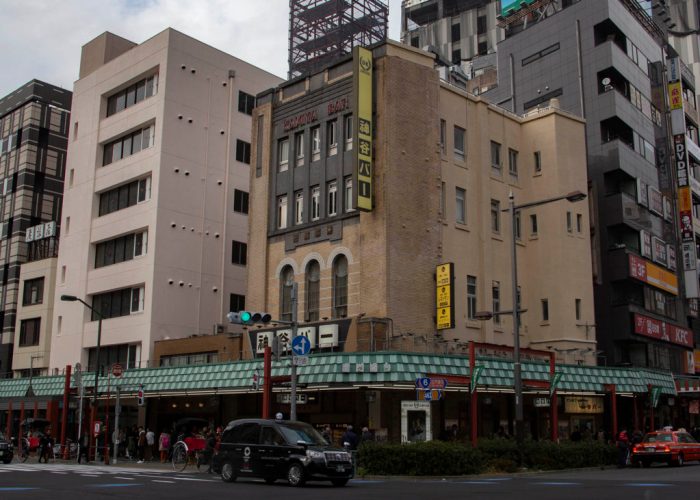 Tokyo’s oldest Western-style bar was built in 1921 and has survived both earthquake and air raid to continue serving its signature cocktail, Denki Bran. Denki Bran was created in 1890 by alcohol importer Kamiya Denbei by mixing medicinal brandy with gin, wine and herbs creating a strong, sweet and imminently drinkable bottled cocktail.

It’s less a bar and more a loud, jolly German beer hall. The clientele is mostly older but eclectic, the food and drink is cheap but good and the atmosphere is electric. We drank Denki Bran with a beer chaser which cools the electricity and brings out the sweetness, and also tried a Denki Bran fruit punch that makes chu-hi look like a child’s Hi-C. Another good drink option is the port wine which is as sweet as it is strong. 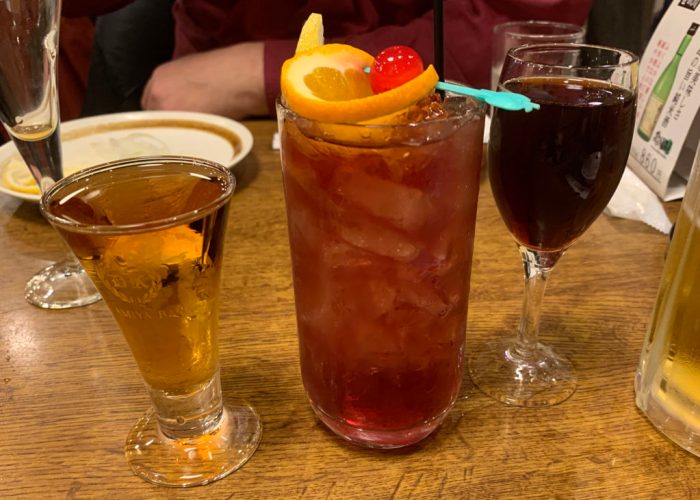 For more of these snapshots of life through the years in Tokyo there are numerous museums dedicated to different eras, though the most comprehensive is the Edo-Tokyo Museum which has life-sized mockups of everything from the nagaya to a 1960s danchi government-built apartment among a robust collection of artifacts and engaging presentations on the entirety of Tokyo’s history.

For more information on Shitamachi places to visit here.

Dress, stroll and eat in the Taisho Era with Tokyo hotel’s kimono plan