Before arriving in Japan, you may have imagined the streets here to be scenes of a movie, with old cobblestone roads and wooden buildings found in the Edo Era (1603-1867). You may have imagined running into samurai or kabuki actors in old Tokyo or the former capital of the Shogunate Government. 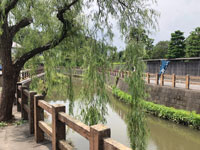 Today, it may seem like those times are gone in Tokyo, a megapolis with huge skyscrapers, modern infrastructure and transportation, but you’ll find old Tokyo if you know where to look.

In the area there are several towns known as “Koedo,” or little Edo, that preserve the original townhouses and streets from the era, allowing for a glimpse at the former glory of the samurai capital.

In Chiba Prefecture, Sawara is one of those towns which can take visitors to the old-style Japan they seek. It is only a few hours’ drive from most bases in the Kanto Plain via the Higashi Kanto Expressway.

Situated along the Tone River, Sawara accommodates various canals, ponds and waterways. The district is known for being a host to beautiful iris flowers, which draw many locals to enjoy them during the rainy season in early summer. 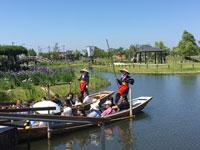 For the famous blooms, visit Sawara Iris Park, where there are over 400 different types of irises and over 1.5 million iris flowers in total between June and July. We visited the park in late June and were able to catch a park full of white, pink, violet and blue irises. The ponds, small rivers and bridges, along with traditional boats operated by ladies in blue kimonos, brought a touch of nostalgia. I suggest hopping on a boat to enjoy the irises on water.

After, we stopped in at the park’s souvenir shops and purchased iris flowers, local food and sweets. I even indulged and had a sweet potato ice cream.

Once we’d had enough irises, our next stop was Sawara’s city center. 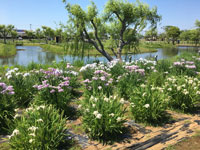 We parked our car at a parking lot near a classic-looking wooden bridge and found ourselves in the old town of Sawara. The city center was surrounded by storehouses and merchant buildings, still standing and in remarkable condition, dating back to the late Edo period.

Willow trees lined the riverbank and the streets we strolled were lined with dark-brown wooden buildings and grey-tiled roofs. We were transported to scenes of old samurai movies.

Even more impressive is that this area is not only preserving its old town look and feel, but It’s still functioning as a modern town. 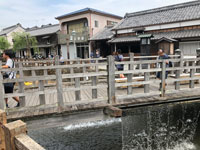 We found a grocery store, vegetable stand, hardware shop, a barber shop, liquor store and various restaurants and sweetshops inside the old buildings on the same road.

Back in its heyday, Sawara’s waterway was vital for the transport of soy sauce, miso and rice from the countryside. Some of the wooden boats are still around and we saw a few of them, except now they carry tourists instead of food staples.

Unlike more well-known Edo Era districts like Kawagoe, located just north of Yokota Air Base, or any area in Kyoto, Sawara is the place to go if you want to enjoy freely without the crowds. 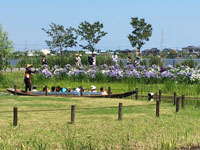