From busy downtown areas to sleepy rural villages, convenience stores are a common sight in Japan, open 24 hours a day and 365 days a year. The three big names of Japanese convenience stores are 7-Eleven, FamilyMart, and Lawson, dominating the city centers. You won’t only find snacks, boxed lunches, and freshly brewed coffee but also alcoholic drinks, everyday items, and a lot more in these stores. During the night, they even act as a drop-in spot for the police and services like mail reception, ATMs, multifunctional printers, and free-to-use toilets make convenience stores indispensable for Japanese daily life.

But what is the difference between the difference convenience stores? We’re taking a thorough look at Japan’s “Big Three” and their different services, brands, and more.

What is Special About Japanese Convenience Stores? Here’s Examples of How to Use Them! 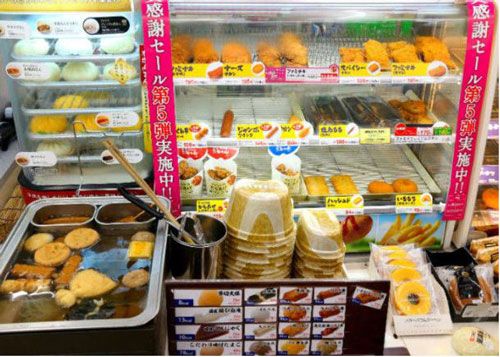 It’s not an exaggeration to call Japanese convenience stores the beating hearts of the cities, an inherent part of the daily life of an area. Shopping, food, taking a break, killing some time, paying bills, stationery, evacuation shelter – convenience stores serve a broad variety of purposes. 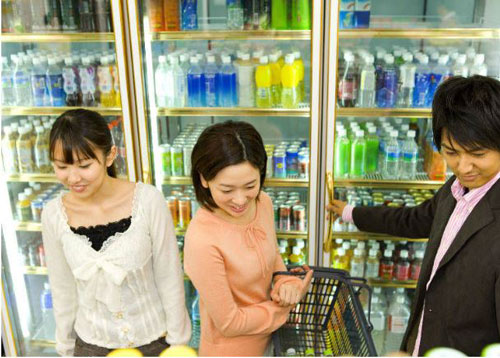 Students
Many Japanese students head to the convenience store after school. Chatting at the eat-in corner, playing some online games using the free Wi-Fi, and so on – it’s a social gathering spot. Even if there’s nothing special to do, it’s always worth checking out the magazines and comics sold at the shop, just to take a break and relax after class. Especially in the evening, students returning home from club activities stop by to grab a quick snack before dinner.

College Students & the Working Population
The multifunctional printers at convenience stores are great to copy one’s notes, scan a document, print photos, or even send a fax. Everyone who does not have a printer at home uses the convenience store instead.

Multifunctional terminals also handle utility bills and several administrative procedures. That saves busy office workers a trip to the town hall, open even late in the evening and during the weekend.

Children & Women
A lot of Japanese elementary school and junior high students go to cram school after their classes and convenience stores serve as well-lit spots of reassurance even after dark. That also goes for women walking home by themselves late at night, when convenience stores act as isles of safety and reassurance that are always open.

People Living by Themselves
A lot of Japan’s online shopping sites let you ship your order to the nearest convenience store where it can be picked up at your leisure. A lot of them also accept mail that you want to send, making them incredibly convenient for people who live by themselves and always miss the delivery due to being at work the whole day.

Homemakers
Convenience stores offer a nice variety of food and side dishes that can quickly be picked up when there simply wasn’t enough time to prepare a full meal. That’s especially helpful for Japanese housewives who are responsible for making food for their entire family every day.

Seniors
The readily made dishes available at convenience stores offer both sufficient calories and nutritional balance, important for senior citizens who cannot or do not want to cook for themselves anymore. Except for particularly remote areas, there always is a convenience store within walking distance, offering both food and a bit of exercise. 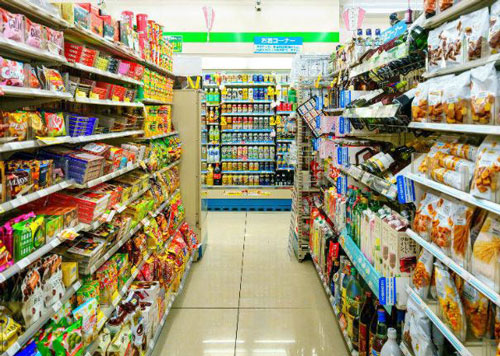 Looking at the history of convenience stores in Japan, the first 7-Eleven, FamilyMart, and Lawson stores opened in the mid-1970’s. Back then, the owners of the three franchises were all large supermarket chains.

And yet, each of the three major brands was started in its own way. 7-Eleven already existed in the United States and came to Japan via a license agreement as 7-Eleven Japan, while FamilyMart started out as independently opened small stores and Lawson was originally a dairy shop in partnership with a leading food company from the United States. Back then, Japan was in the middle of an economic boom that also had a lasting influence on people’s lifestyles and consumer behavior. Convenience stores, offering a variety of products and services even at night, were the answer to these new needs. 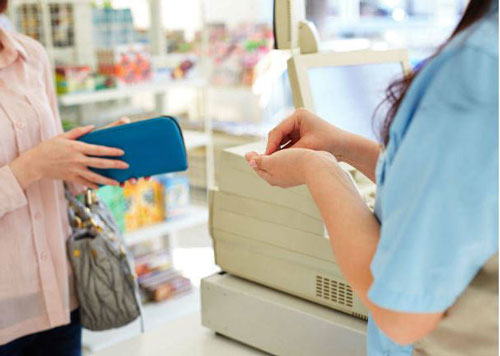 *3 Lawson stores also accept Sagawa Express deliveries. However, Sagawa express shipment is not available.
*4 Certain stores may not have an eat-in space.
*5 The number of new product release per week is a reference from October 23 (Tuesday) to 29 (Monday), 2018.

Characteristics of Each Convenience Store Chain 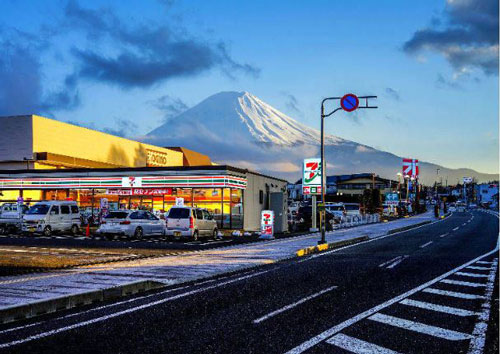 -Seven Fresh Food
This brand is about freshly made bento boxed lunches and ready-made dishes for breakfast, lunch, and dinner.

-Seven Premium
A “continuously evolving” brand that responds to the specific needs of specific people, such as seniors, working women, eco-focused people, health-conscious people, and so on.

-Seven Premium Gold
Products made with high-quality ingredients and a particular commitment to technology and preparation method. The golden packaging stands out and series such as the “Golden Beef Stew” (386 yen) and the “Golden Hamburg Steak” (386 yen) boast an authentic taste of restaurant quality.

-Seven Premium Fresh
Focused on traceability, this brand is all about transparency, safety, and fresh food.

-Seven Café
Next to freshly brewed coffee from the machines installed inside the stores, Seven Café also offers donuts and other sweets to accompany such a fresh cup. 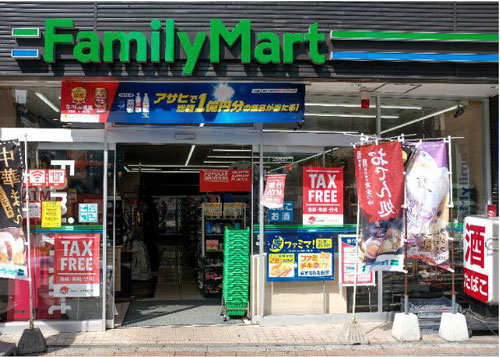 FamilyMart’s private brand called “FamilyMart Collection,” which comes as “Regular” and “Platinum.” One characteristic that sets FamilyMart apart from other convenience stores are the frequent collaborations with popular brands and releases of limited products. At the end of August 2018, FamilyMart also merged with Circle K Sunkus, the fourth-largest convenience store chain in the company. The merger turned FamilyMart into Japan’s number two in terms of size. The chain also offers quite a lot of stores with tax-free service in the city center.

-FamilyMart Collection
Regular line: daily goods and products of high quality and for a reasonable price.

Premium Line: high-quality goods and products with a special focus on ingredients and manufacturing method. 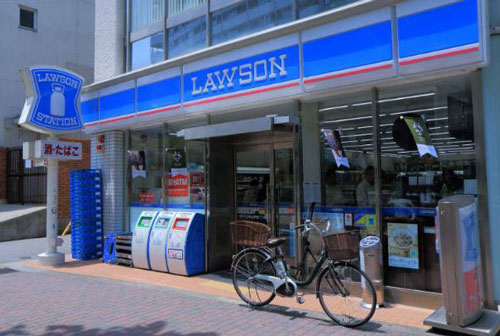 Since Lawson adopted the catchphrase of “the health station in the city” in 2013, the convenience store chain focuses on products centered on beauty and health. From onigiri (rice balls) to bento (boxed lunches), sweets, and more, the lineup offers a broad variety for health-conscious people.

Lawson Select and Lawson Bakery are two of the chain’s brands, but there is also sweets sold under Uchi Café, a brand only available at certain stores that offers freshly made bento boxes at the shop’s own kitchen called Machikado Chubo, as well as MACHI Café and its freshly brewed café. The diverse products are categorized by these different private brands. There are also branded stores called Natural Lawson and Lawson Fresh Pick with a particularly strong focus on food safety and health. They are particularly popular among women.

Lawson has also developed a separate service called Lawson Store 100, a low-price supermarket targeting singles. Other specific brands are “Lawson Travel” and “Lawson’s Driver’s License;” it’s a characteristic of the convenience store chain to dive into entirely different industries and develop their own services.

-Natural Lawson
“Beautiful, healthy, comfortable,” is the concept of Natural Lawson, conscious of the lifestyle of its female customers. These shops offer goods and items that aren’t sold at regular Lawsons, such as food without any artificial sweetener and clearly indicating just how much calories, fiber, trans fats, and proteins are contained. A few of those dishes are also sold at regular Lawson stores.

-Lawson Store 100
This is a low-cost supermarket targeting singles, much like a grocery version of a 100-yen shop. It offers about 4,000 items including fresh produce, readily made dishes, and daily necessities on a 24h base.

-Lawson’s Driver’s License
This service offers training packages all around Japan to acquire a driver’s license. It also is in a partnership with the Waseda Environmental Institute’s Car Club, offering car inspections and repairs. Applications can be made from Lawson’s multifunctional terminal “Loppi.”

Besides the three big convenience store chains of Japan, there are several other brands that boast their own characteristics and plenty of individuality. 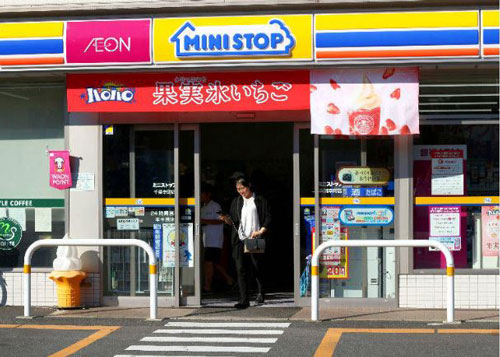 Ministop is Japan’s first and only convenience store franchise that has offered fast food and its own eat-in corner from the very beginning. It is especially famous for its cold sweets such as soft serve. Ministop is also responsible for the Halo-Halo (Filipino shaved ice) boom in Japan that started with the convenience store selling the cold delicacy. 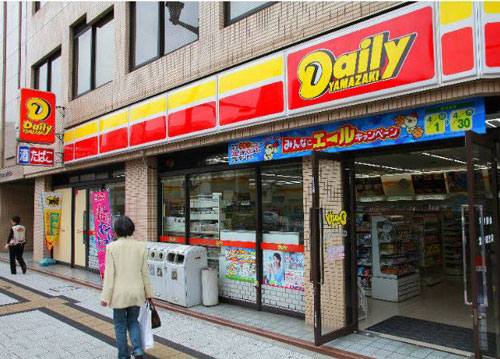 This convenience store is developed by the famous company Yamazaki Bread, Japan’s leading bread maker. Naturally, its convenience stores offer a fantastic selection of different bread and pastry specialties. The “Daily Hot” corner offers delights and sandwiches freshly baked right at the shop, as well as freshly made lunch, and so on. 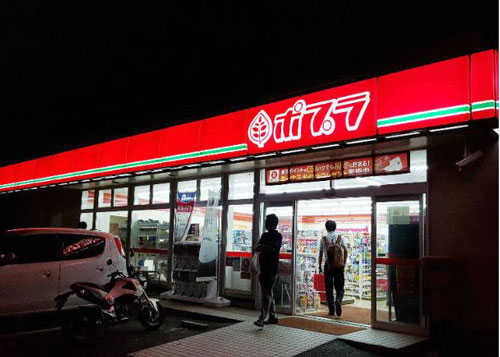 Poplar has 461 stores nationwide (as of February 2018). Its headquarters is in Hiroshima and the convenience store chain can mainly be found in western Kanto. Especially singles are big fans of the “Pop Ben,” boxed lunches with freshly cooked rice packed right at the store. This convenience store chain manages to capture the warm, welcoming atmosphere of a local bento shop. 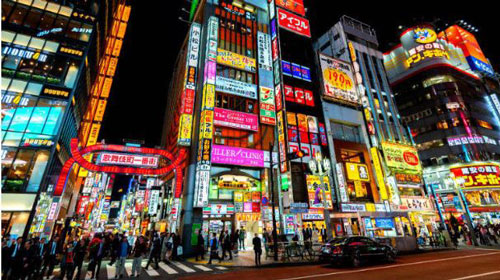 This is the personal opinion of the author, but 7-Eleven’s free Wi-Fi is particularly easy to use, and the chain’s food boasts a high quality, including the bento boxes and readily made dishes. The private brands with Seven Premium Gold are also great. FamilyMart, on the other hand, has many duty-free shops in the Tokyo area and the selection of stylish MUJI products is a major plus. Lawson and Natural Lawson set themselves apart with their strong focus on health and beauty.

Each of the chains uses their massive size to offer a broad variety of convenient services while each having their own characteristics and uniqueness. Convenience stores are a major part of daily life in Japan and are sure to enhance your travels in the same, fantastic way!