Cycling is a favorite pastime and sport in Japan, so it’s not surprising that the country is home to one of the top cycling routes in the world.

The Shimanami Kaido, one of the seven best cycling routes according to CNN in 2015, is a 70-kilometer-long (43.5 miles) cycling route across the Seto Inland Sea. It was opened in 1999 and connected Hiroshima and Ehime Prefectures across six islands (Mukaishima, Innoshima, Ikuchijima, Omishima, Hakatajima, and Oshima) through a series of six bridges designed to accommodate cyclists with ramps at three-to-five-degree inclines.

The route is open year-round, and you can start either in Onomichi in Hiroshima Prefecture on the island of Honshu or Imabari in Ehime Prefecture on Shikoku. There are multiple routes across the islands, but the blue course is the most popular. The entire way is clearly marked with a blue line, thus, eliminating the need for maps or GPS. 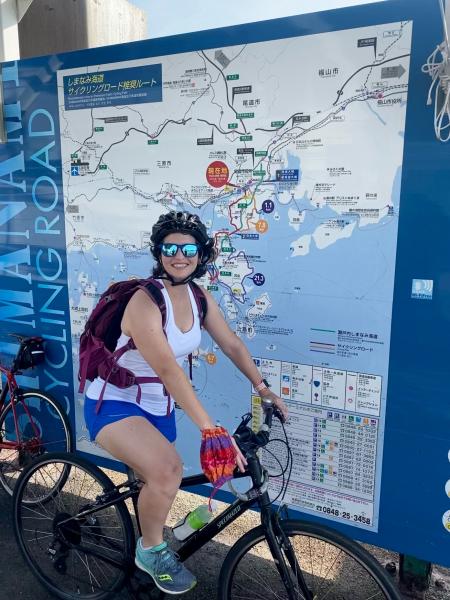 To boost tourism, officials waived the 500-yen bridge tolls for cyclists through March 31, 2024, so don’t wait too long to tackle this ride!

Experienced and intermediate riders can complete the Shimanami Kaido in one day. However, I recommend more casual riders, like me, split it up over two days to allow for sightseeing with multiple detours. I saw many riders, from serious cyclists to families with small children.

Along the route, cyclists can stop at over 150 rest areas, including retail shops, guesthouses, and more, which provide amenities like air pumps, bike stands, benches, water, and toilets. So, there is no need to push yourself too far because there is something for everyone along the route. The important thing is to enjoy the ride and soak up the beautiful scenery of the Seto Inland Sea and the islands' small towns.

Don’t have a bike? The bicycle rental system is fantastic, so there is no need to bring your own bike unless you are a serious rider. You’ll find dozens of bicycle rental terminals along the cycling course.

A cross bike rental (a hybrid bike with flat handlebars) costs 2,000 yen (about $15) daily. Return the rental to the same terminal you picked up and get your 1,100 yen deposit back. If you split the route up over two days and return the bike at the other end, the rental should cost around 5,100 yen. Tandem bikes (3,000 yen/day) and electric-assist bicycles (2,500 yen/day) are also available at some rental terminals. Still, they must be returned to the original pick-up spot.

Rental bicycle reservations aren’t required but are recommended during peak season or weekends. These rentals include a free helmet to borrow, or you can bring your own. I also recommend getting a seat cushion if you aren’t accustomed to riding for many hours and long distances. You will thank yourself later!

For more advanced riders, you can rent through bike retailer Giant (two locations at Imabari Station and Onomichi Station) for 4,000 to 15,000 yen per day. However, Giant requires advanced reservations and charges an additional fee of 3,300 yen to return bikes at a different location.

For my excursion, I started in Onomichi and split it up over two days, which is easily achievable over a weekend. On Saturday morning, I rented a cross bike at Onomichi Port. I took a short ferry ride (adult and bike cost 70-110 yen) that leaves every 5-10 minutes to Mukaishima Island. After that, I took a detour to Iwashijima Island and visited the Itsukushima Shrine on the beach.

Next, I crossed the Innoshima Bridge (1.2km) to Innoshima Island. Along the route, I detoured to Shiratakiyama Temple, with around 700 stone Buddhas overlooking the sea. The view was amazing and worth riding up the steep hill to the top.

For the third island, I biked across Ikuchijima Bridge (790m) onto Ikuchijima, Japan's No. 1 lemon producer. I stopped at Dolce, a famous gelato and sorbet shop for cyclists. Ikuchijima is also known as an island-wide art museum with 17 outdoor art pieces throughout the island.

After, I turned in for the night at Juicy Fruits B+B close to Setoda Sunset Beach, known for its white sand and clear blue waters. The food was fantastic and came with a stunning sunset. The owner also makes lemon preserves from his own lemon orchard. If you stay here, purchase a jar as a souvenir— you won’t regret it.

I woke up tired and sore but was looking forward to the last half of the route. Ikuchijima also has lemon benches called the “lemon grove,” which some say are great for social media photos. I, however, found that they are perfect rest stops on the ascent to Tatara Bridge (1480m) towards Omishima island.

Crossing over to Omishima, Ehime Prefecture is the halfway point for the trip. Unfortunately, the blue course only covers the northeast part of Omishima, so you'll quickly find yourself crossing the Omishima Bridge (328m), the shortest bridge on the tour, onto Hakatajima. From there, I made my way to Hakata Beach, a popular local swim spot.

Hakatajima is known for its salt production, and one of the detours features a salt factory if you are interested. Hakata Beach offers salt soft serve ice cream, and the line can be long, but it’s worth it on a hot day.

I couldn’t rest at the beach forever, so I hopped back on my bike and crossed the Hakata-Oshima Bridge (1165m), comprised of a box girder (325m) and suspension (840m). The inclines of this leg were challenging even with the shallower grade for cyclists. Still, in the end, the views of the beautiful Seto Inland Sea islands are totally worth it.

Of the entire trip, the Oshima portion was the most difficult to cycle. There is a hill in the middle, so crossing that at the tail end of the tour wasn’t pleasant. I also had to tackle the climb up to the Kurushima Kaikyo Bridge (4105m) over to Imabari on the final island of Shikoku.

The Kurushima Kaikyo Bridge was completed in 1999 and is the longest suspension bridge in the world. To maintain a shallow incline, the bridge has an impressive corkscrew ramp on the side. You can watch cyclists going in circles down to the bottom from the bridge.

After arriving in Imabari, it was a final push to return the bike at the train station and make my way home. This fantastic trip pushed me out of my comfort zone since I’m not a long-distance cyclist.

It is challenging, but you don’t need to be an avid cyclist to enjoy the Shimanami Kaido. Set your own pace and enjoy the ride and the scenery. I hope this goes on your travel list—you won’t be disappointed!

Hop on a bike

Imabari –> Onomichi:  One option from Tokyo is to take the Shinkansen to Fukuyama Station (3.5 hours), then hop on a bus to Imabari Eki Mae (1.5 hours).  To return from Onomichi, take the JR Sanyo Line train to Shin-Onomichi Station and the Shinkansen to Tokyo

Taeko McFadden is originally from Virginia and is currently a U.S. Navy commander with the Seventh Fleet at Yokosuka Naval Base. McFadden has been stationed in many places around the Pacific including Thailand, Korea, and Hawaii. McFadden said she enjoys traveling and exploring new cultures and hopes to share with other servicemembers the wonders of Japan and inspire them to explore the sights and culture in the country. Follow her on Instagram @TaekoMcFadden

Hiroshima, Nagasaki atomic-bombing exhibit to be in Pearl Harbor on 75th anniversary of blasts

Beginner’s guide to bikepacking in Japan

My Paradise: A golfing adventure in and around Iwakuni