Hit the slopes at Niseko ski resorts in Hokkaido, Japan

Hit the slopes at Niseko ski resorts in Hokkaido, Japan

Niseko is a world-famous ski resort deep in Japan’s northernmost prefecture Hokkaido. The Niseko resort area is about a two-hour bus ride from Japan’s 5th largest city of Sapporo.

Whilst Niseko is mostly known for its amazing powder snow and ski town nightlife, it’s also an exciting destination in the summer months and is quickly earning a reputation as the adventure capital of Japan.

Many US servicemembers have been traveling to Niseko this season, particularly given the challenges and limitations of international travel. We caught up with Brent Verco from Niseko Military Leave (NisekoML), a military tourism provider in Niseko. 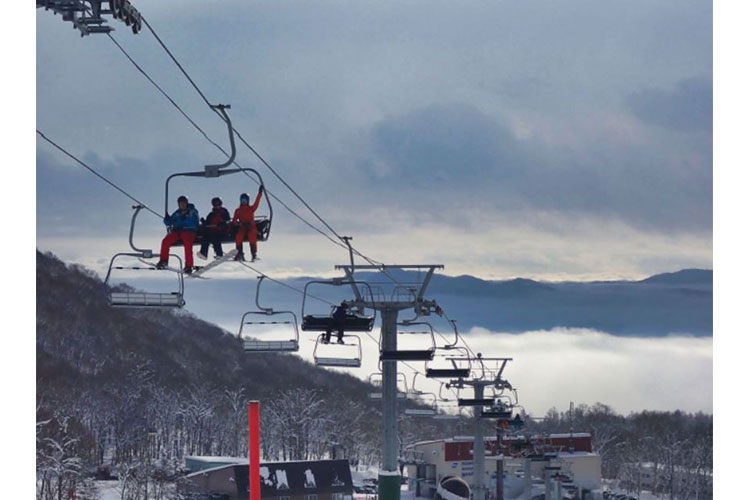 Niseko gets around 12 meters of snowfall per year with most of it falling as light dry powder with lots of air trapped inside. The unique Hokkaido snow with about only about four percent water content allows for advanced riders to float over the powder and beginners will also appreciate falling on a very forgiving surface.

Niseko United is made up of four individual resorts that climb the sides of the impressive Mount Annupuri and meet at the summit. This means that you can always find a side of the mountain that is most favorable to the wind, light and snowfall. In short, a trip to Niseko means you have a very high chance of experiencing amazing Japanese powder. With ski runs spanning over 48 kilometers, there is always something to discover even for locals who have been riding here for years.

Niseko started out as not one resort, but four independently owned resorts meeting at the summit of the Annupuri Mountain. Some visitors have their favorite resort and choose to buy tickets for just one of the four resorts, but most punters take the opportunity to purchase a “Niseko United” all-mountain pass that allows them to enjoy all tracks the mountain has to offer.

If you purchase an all-mountain lift ticket, you are also eligible for a free shuttle bus that connects all four resorts and gives you a chance to see a bit more of the terrain and local village. Another great thing about riding all four resorts is that the weather does not affect the mountain equally. Sometimes one resort can be sheltered from strong winds, or an evening snowfall can really favor a different side. It’s worth checking the weather report and asking a local rider for advice as Niseko weather can change very quickly.

How to get to Niseko?

The most common and recommended option if you are traveling independently is take one of the dedicated shuttle bus services that service the New Chitose Airport. The Hokkaido Resort Liner has been running for over 10 years and will get you to Niseko in about two and a half hours from the airport. If you are travelling from Okinawa, Peach Airlines fly direct once a day over the winter ski season.

Another popular option is to take the JR train. It’s a little longer than the shuttle and does involve changing to a local train at Otaru but the train offers a stunning view of Hokkaido’s coastline. If you’re taking the local train, make sure to get off at Kutchan Station as the Hirafu Station is not serviced by public transport.

Renting a car and driving from the airport is not recommended unless you are familiar with the route and have some snow driving experience. 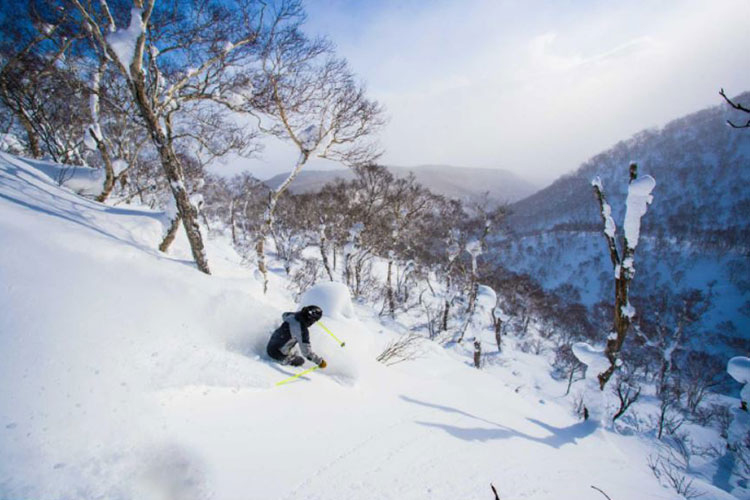 When to ski Niseko?

The resort usually opens during the first week of December and the peak season runs through mid-March. Advance skiers who want to run the backcountry gates should wait until early January when these areas are fully operational.

Niseko also has spring skiing a lot later than its more southern neighbors and the resort is typically open until the beginning of April. Spring skiing is not to be overlooked for families with young children as it can be a much more comfortable experience up on the mountain with the very cold conditions that can occur in peak season. 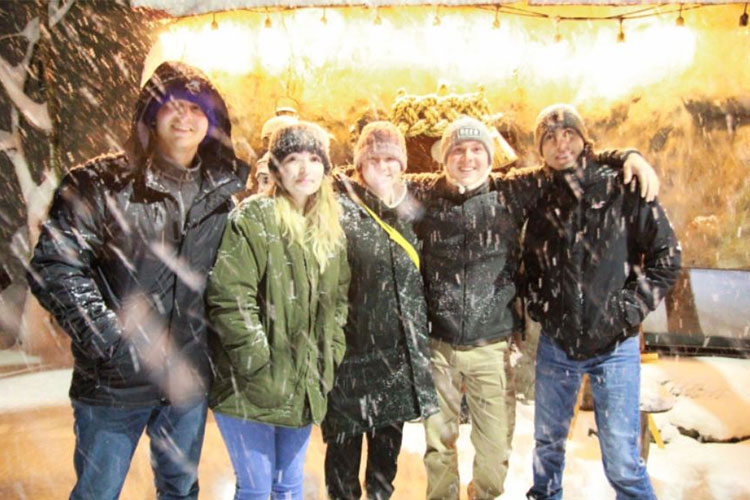 What if I don’t ski?

There are still some great mid-winter adventures to be had in Niseko even if you don’t ski. Some recommended options include lounging around in area onsen, partaking in some delicious food tours, winter rafting, snowshoeing, barhopping and sampling some of the new distilleries in the area. Niseko’s non-ski options are great and offer plenty for everyone in your group. 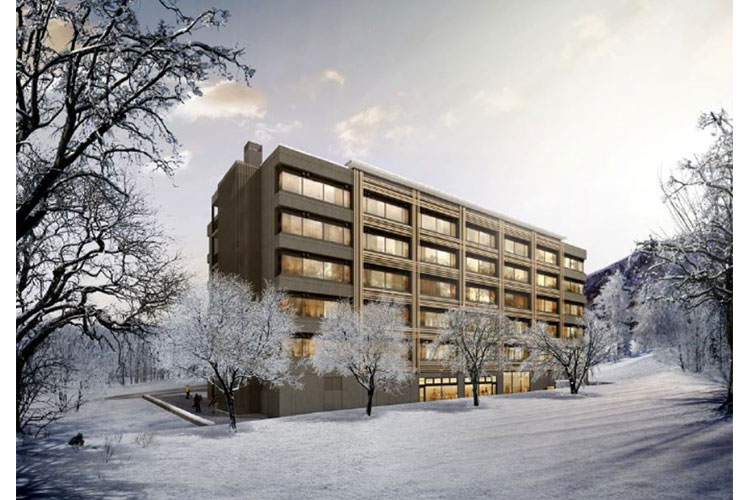 Niseko has a range of accommodation from backpacker Inns to some high-end homes us mere mortals will only ever get to drive past and wonder what it must be like on the inside. Many visitors settle on “middle of the road” condos in the lower Hirafu area offering Niseko nightlife and ski lifts all within walking distance.

For true powder lovers, there are plenty of ski-in ski out options and the resort of Niseko Village really stands head and shoulders above others in this regard.

Niseko Village has many amenities perfect for a great day on and off the slopes, Vanessa Han, the Marketing Communications Manager there said.  “Niseko Village offers award-winning hotels with spa and onsen facilities, a dining and retail village hub, luxury residences, an international snow school and alpine activities. Ski in-ski out really is easier to manage if you are travelling with kids too,” she added. 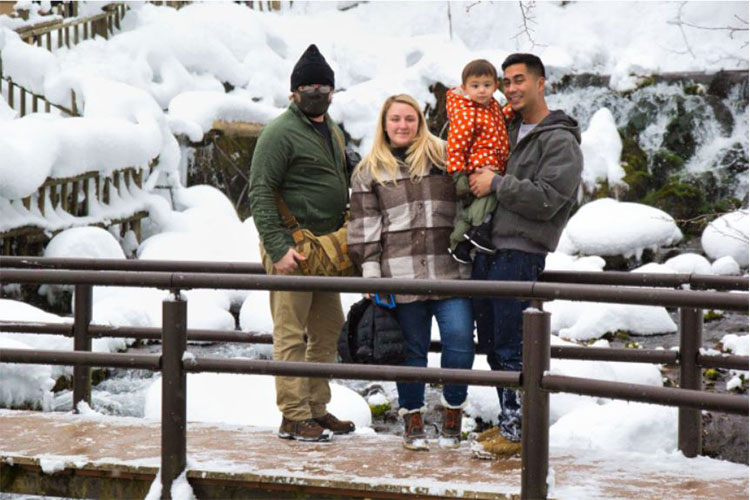 On the Dream Niseko Tour, four servicemembers who won the NisekoML prize giveaway earlier this year, were able to enjoy Niseko Village. Many local businesses hoping to get some much needed support from domestic military tourism were kind enough to help out by donating gloves, ski lessons, photography, accommodation and lift tickets.

Brandon E, one of the prize winners, said he and his family had a great time exploring the area. “It’s been a long time since we had a snow holiday, and it was also the first time for our 1-year-old son got to experience snow,” Brandon said. 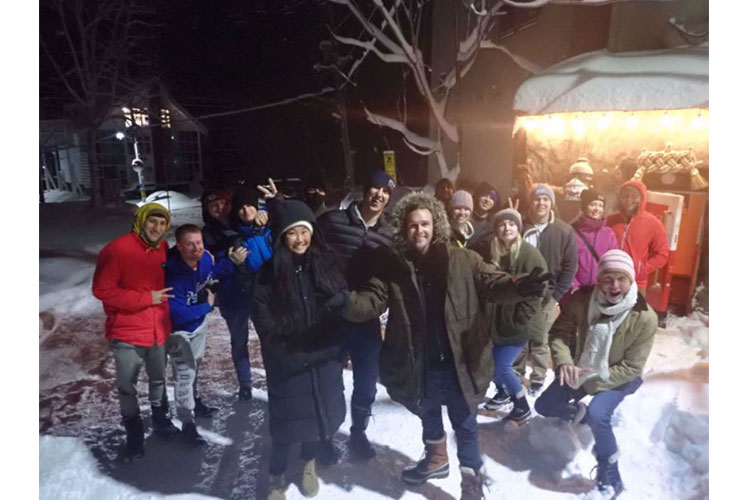 There are also some new options for group military travel. On a tour of military folks earlier in the season hosted by NisekoML, 23 members had the opportunity to try some runs on the great snow Niseko brings every year. Though the latest tour set for January 2022 has been canceled due to COVID-19 concerns, NisekoML is closely watching the situation and hoping to have some more group tours open later in the season.

More information on catching some snow in Niseko

Why Hokkaido’s hairy crabs are so popular: Firm meat most delicious in spring!