by story and photos by Takahiro Takiguchi
Stripes Japan
Email
Print
Reddit
Tweet
Share
Pinterest
More
With a population of nearly 1.2 million, Hiroshima is the largest city in the Chugoku region of Western Honshu. It is often called “The City of Water,” as six large rivers flow through the center of city. With the rivers and countless bridges over them, along with various fountains and water monuments, this city is very impressive and is only an hour drive from Marine Corps Air Station Iwakuni.
This city, however, is known first and foremost as the first city in human history to suffer atomic devastation. 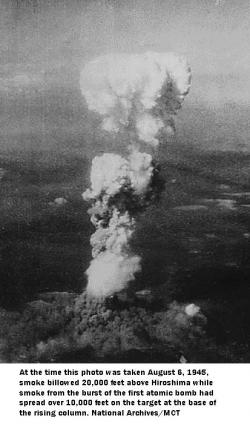 On the morning of Aug. 6, 1945, a B-29 flew over Hiroshima and cut dropped a four-ton bomb code-named Little Boy at 8:15 a.m. The bomb exploded above the center of the city. As a result, most of the city was wiped out and more than 140,000 people were killed.
On a recent walk through the streets of today’s Hiroshima, I could hardly link this beautiful city to such devastation 70 years ago.
Hiroshima Peace Memorial Park
Hiroshima Peace Memorial Park is the key site in terms of sightseeing around the city. This 30-acre park situated between the Otagawa and Motoyasugawa rivers is accessible by the T-shaped Aioi Bridge. The uniquely shaped bridge was the target used to drop the A-Bomb because it was so easily recognizable from the air.
Located within the park are various attractions. They include the Memorial Cenotaph and the Peace Flame, Genbaku (A-bomb) Dome, Peace Memorial Museum, Peace Memorial Hall for the Atomic Bomb Victims, International Convention Center, the Peace Bell and the Children’s Peace Monument. 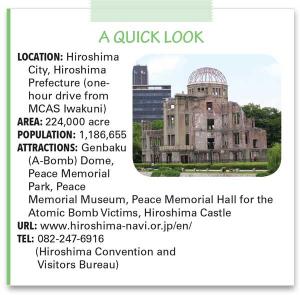 When I entered, I saw a lot of visitors walking up to the Memorial Cenotaph in the center of park. It was as if they were on a pilgrimage. They would stop at the Cenotaph, which was designed to resemble the primitive A-frame houses in which the Japanese of past generations lived, to pray for the bomb victims.
Through the vaults of the Cenotaph, I saw the Genbaku Dome and the Peace Flame. It is said that the flame will only be extinguished when all atomic weapons in the world are banished. Buried inside the vaults is a stone chest holding books containing all the names of those who died as a result of the bombing within the first year. On its exterior are the words: “Repose ye in Peace, for the error shall not be repeated.”
On Aug. 6 of each year, there is a solemn ceremony held in the park, and citizens float paper lanterns on the rivers to represent the souls of the victims.
Genbaku Dome and the hypocenter of a-bomb 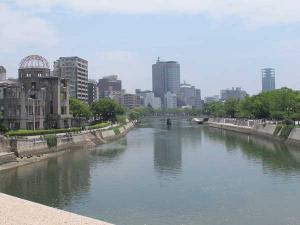 The Genbaku Dome is the only structural ruin of the atomic devastation left erected in the city. It was originally built as a Prefectural Industrial Promotion Hall in 1915. Miraculously, the hall did not completely collapse during the bombing, although all the employees in the building were killed instantly. The half-shattered structure has remained untouched since the bombing. In 1996, the dome was registered as a UNESCO World Heritage site.
Before visiting Hiroshima, I thought the dome was ground-zero. But I learned that Shima Hospital, about 524 feet away from the dome, was the actual impact point of the bomb. A small sign in front of the rebuilt hospital attests to it. Surprisingly, the hospital has continued operating at the same location since the event and is now the Shima Surgery-Internal Hospital.
Peace Memorial Museum and Hall 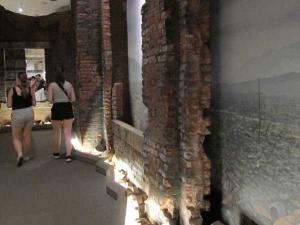 The museum was crowded with visitors, a majority of them foreigners.
The exhibits at the Peace Memorial Museum range from a model of a bomb and maps and pictures of the devastated city, to charred fragments of clothing and melted tiles.
The most shocking display for me was the so-called Human Shadow Etched in Stone. It was a stone with a black shadow. According to the description, the stone was found 853 feet away from the blast point. A person sitting on the stone was exposed directly to the atomic flash. The victim is presumed to have been consumed on the spot by a 12,632-degree Fahrenheit atomic fireball. Only the shadow remained.
When you visit the museum, be sure to rent the English-language audio guide at the entrance of museum for 300 yen. Although each exhibit has a brief explanation in English, the recording will help you understand things in detail.
The Peace Memorial Hall for the Atomic Bomb Victims is a 2-minute walk from the museum. The library in the hall gives you access to all forms of archives relating to the atomic devastation, such as journals, letters, photographs and recorded voices of victims. English translations of all the materials are available.
Children’s Peace Monument 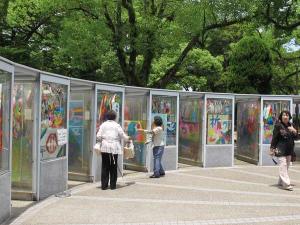 Leaving the park, I saw countless colorful paper cranes hanging in display cases around the Children’s Peace Monument. The cranes are in memory of all the children who perished in the bombing. It was the idea of Sadako Sasaki, a young girl who died of leukemia caused by atomic radiation. Her will to live was strong. She believed that if she could fold 1,000 paper cranes, she would be cured. However, she died at the age of 12 after making more than 1,500 cranes. 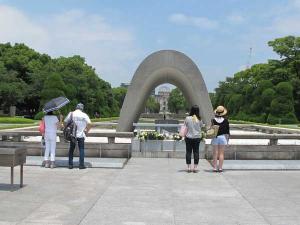 About 10 million paper cranes (weighing about 10 tons) are sent to the monument each year from all over the world, according to Hiroshima City.
The bell on the statue rings out beautifully like a giant wind chime whenever the wind blows.
Hiroshima Castle
Hiroshima Castle, just a 10-minute walk from the park, was originally built in 1589 by Lord Terumoto Mouri, who also gave the city its name. The castle is unique because it served as a military facility after the Meiji Restoration in 1867. During the Sino-Japanese War, the Imperial General Headquarters was established at the castle. 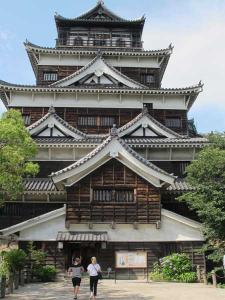 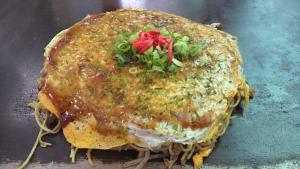 Hiroshima is famous for its “okonomiyaki,” a popular pan-fried food that consists of batter, cabbage, noodles and select ingredients such as meat, seafood and cheese.
You can enjoy this savory pancake-like specialty at Okonomi Mura (Okonomiyaki Village) near Hacchobori Station.
While the building houses 25 okonomiyaki restaurants, Yamachan, Sarashina and Hassho on the 2nd floor are especially popular.
Address: 5-13 Shintenchi, Naka-ku, Hiroshima City (3-minute walk from Hacchobori Station of Hiroshima Dentetsu line)
URL: www.okonomimura.jp/foreign/english.html
Tel: 082-241-2210

All you want to know about Onsens in Japan