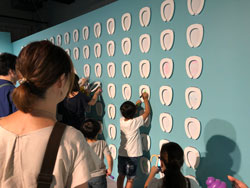 There was nothing but poo all over the place. And children of all ages (including ones with beards and graying hair) were enjoying stepping on piles of poo while gleefully shouting “POOOOO!” at the top of their lungs.

Parents took photos of their young children playing with the poo, while older “children” positioned themselves for poo-fect selfies. My wife and I stared at each as we took in the scene. What kind of the place did we stray into?

Well, truth be told, we knew exactly where we were: the Unko Museum, aka Poo Museum.

Since its opening a few months ago in the Aso-Build entertainment complex in Yokohama, the Unko 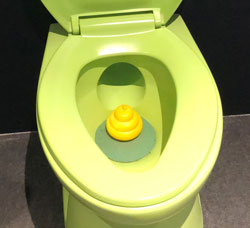 Museum has attracted tens of thousands of curious poo-ple. So, my wife and I decided to check it out and see if it was worth it or just a pile of poop.

First of all, if you are a prude or have a distaste for potty talk, this place isn’t for you.

Welcome to the poo museum

We were greeted at the entrance by en-poo-siastic employees smiling widely while yelling “unkooo!” (pooo!). It was obvious that they were proud of their poo.

We were led into the first room, where we were invited to sit on a colorful toilet and show the staffers how we strain ourselves on the toilet to push out a really stubborn poo. No, I’m not making this up. 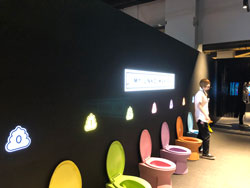 Although It made us a bit embarrassed, we did it anyway. And when I stood up from the toilet, I saw a fresh poo (artificial, of course!) had magically appeared in the toilet. My poo was yellow, but my wife’s violet. They both had nice shapes to them, so evidently, we are both very healthy.

We picked up our poo from the toilets and started exploring.

The spacious floor was divided into three areas: The “Unstagenic” area for shooting photos and videos, the “Unteractive” area for various poo games, and the “Untelligent” area, a kind of gallery of poo art.

Piles of colorful poo and well-coordinated displays throughout the space overwhelmed us. We laughed as we explored what we dubbed the “Kingdom of Poo.”

The Unstagenic area was, literally, an Instagram-friendly, photogenic poo staging space. We kept shooting photos and videos while checking out room after room.

The “Princess and Poo” room was gorgeous with its pink and white hued walls, a three-tiered cake with poo-shaped frosting, and pooshaped tea cups and poo-cookies on a 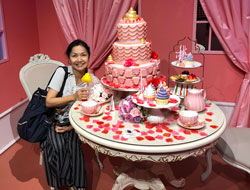 table. Believe it or not, it happened to be my wife’s birthday on the day of our visit, so we took several “birthday photos” of her with the cake. It was like I had planned a birthday poo party for her.

We then entered the “Lovers’ Poo Room,” where two toilets sit side-by-side in the center so couples can enjoy taking a poo together. What a great idea, right?! My wife and I sat on the toilets and asked a staffer to take photos. Who says I’m not romantic?

In the Unteractive area, a colorful giant poo volcano sat in the middle of a pit filled with rubber poos. Children jumped and played about having a fun time in the pit of poo. 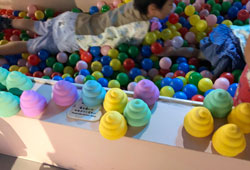 As we were watching the kids, the volcano began to shake and change from cold blue to angry red. Suddenly, it erupted, spewing lots of tiny foam poo from its top. It was a sight to behold.

In the “Crappy Game” corner, we tried to play soccer with a poo-shaped ball. Not the easiest thing to do. We then tried playing the “Hop Step Jampoo” game, where we had to run around and stomp on poo projected onto the floor. When we smashed one, a toilet-flushing sound filled the area.

In the “poo shout” game, you have to shout “unkooo!” The louder you yell into a microphone, the bigger a poo emerges on a large screen. 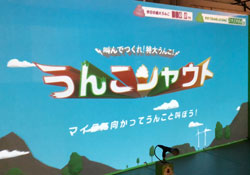 We saw a father and daughter en-poo-siastically yell for nearly 10 seconds straight, and their poo grew to the size of Mount Fuji on the screen. Talk about family fun!

Finally, we checked out an exhibit in the Untelligent area featuring poo paintings drawn by celebrities. We were encouraged to draw our own poo inside a mini toilet-like space. I honed my skill and became a Poo-caso.

As we left the museum with our poo in a bag, we realized we had a lot of fun. It might sound a bit strange, but our take on poo slightly changed that day. Poo may be dirty, stinky and unwelcoming, but in the right setting, dropping a deuce can be a piece of art that’s brings joy to the masses.

With the success of the attraction of Yokohama, a permanent Unko Museum recently opened in Odaiba, Tokyo. I guess you could call that No. 2. 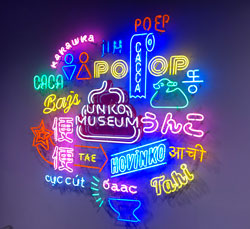