Sakura, that quintessentially Japanese flower that blooms but for a short time then fades away on the wind, can draw crowds to even the most humble city park or riverside to enjoy their beauty, but when paired with some of Hiroshima’s most famous landmarks gives visitors a chance to see these places at their most idealized. The season peaked a few days ago, so there are just a few more days to see Hiroshima at its pinkest. 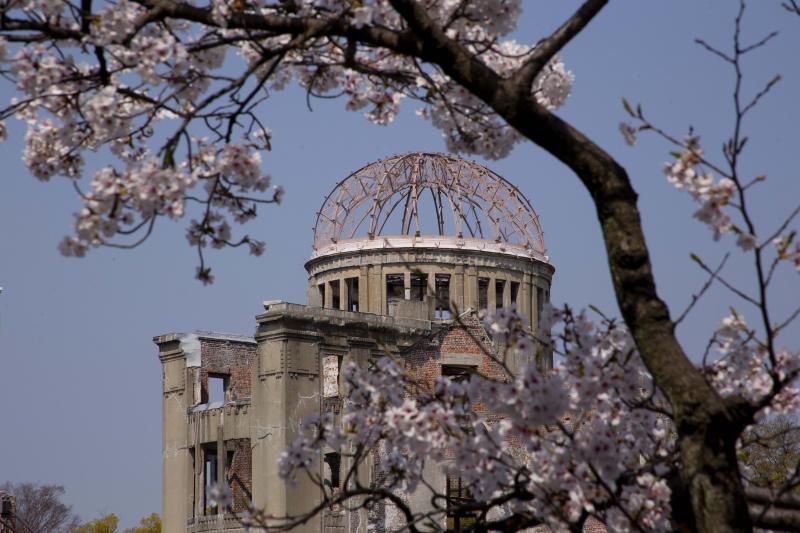 The banks of the Motoyasu River which separate the Genbaku Dome (A-Bomb Dome) and Peace Park both bloom with full bushy trees creating unique viewing and photo opportunities for the city’s most recognizable landmark. For the season the Dome’s best views are across the river in the Peace Park where it can be seen wreathed in symbols of life and its transient nature.

For an interesting view I’ll share my favorite spot in the park, it’s a hidden set of river steps near Aioibashi. At the Peace Park tip of Aioibashi if you look to your left and down you’ll see the narrow, steep stair well hidden behind a tree. If coming from the Peace Museum direction along the water front the stairs are still hidden by a tree and also ground level so are almost completely invisible until you come right upon them. Going down to the waterside it feels like you’re the only person around and you have a difference perspective of the Genbaku Dome, albeit without the sakura. Incidentally the TBS drama version of In This Corner of the World (Kono Sekai no Katasumi ni) filmed a scene with young Suzu arriving in Hiroshima on these steps.

Beside the stairs is also a remnant of the atomic bombing that you can touch, one of the original Aioibashi end pieces. Aioibashi was the aim point of Enola Gay and though bomb itself detonated over a hospital behind the famous Genbaku Dome, which was until that moment the Hiroshima Prefectural Industrial Promotion Hall, the bridge survived and served Hiroshima for several decades.

Beside this park I also recommend following the river on the Genbaku Dome side down a little ways. There’s another small park that is pure sakura concentrate centered on the memorial to Noriyuki Hiroshima Gas Works atomic bomb victims that is perfect for hanami as you can enjoy sake under a sakura blanket while looking out at the opposite blooming bank.

Despite falling in the center of the over-crowding Venn diagram between popular tourist spot and hanami spot, the park wasn’t over-crowded. There were plenty of people around but everyone had space to throw down a standard-issue blue tarp or claim a corner without bumping each other. 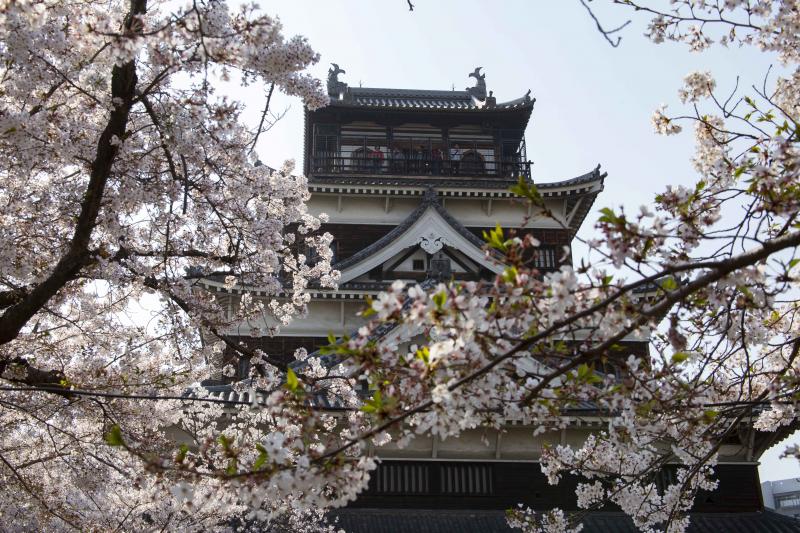 For an even more spectacular view I next headed to Hiroshima Castle. The castle, home of the Chugoku Regional Military Headquarters and focus of a sprawling military complex in 1945, was annihilated by the atomic bomb but was rebuilt in 1958. Today its ancient walls contain a forested park full of sakura and, for now, what appear to be giant inflatable eggs. (No, I don’t know why the eggs are there. Since when did Japan need a reason?)

If you’ve never explored it before, Hiroshima Castle is always worth a visit. The rebuilt keep is a museum detailing its centuries-long history and the birth of Hiroshima. The park itself is has several points of interest, some more obvious than others and like the Peace Park, all of it covered in falling sakura pedals.

During the Sino-Japanese War defensible Hiroshima was the nation’s temporary wartime capital. Emperor Meiji made his headquarters on the castle grounds and though gone, its foundations remain. Where Meiji’s dragon countenance carefully watched Japan’s first major overseas war unfold is now one of the central areas beside the sakura trees, a playground for energetic children and a place for playful lovers at rest. It’s here that I verified sakura is in fact, magic. People all around were being uncharacteristically physically affectionate, nothing extreme but more than one usually sees in public in Japan. (Also my wife didn’t kill me for spending an unpleasant amount of money on Shinkansen fare because I showed her Hiroshima has pretty pink trees therefore the expense was totally justified. See? Magic.)

Also under sakura is the one place at the castle not destroyed in the bombing, the entrance to the air defense command bunker. It’s believed that high school girls sent the first message out of the city confirming that Hiroshima had been attacked. This bunker is closed but opened for tours by reservation. It can be found just to the left of the castle shrine grounds.

Beside the sakura trees, are a few other trees throughout the park that not be as lively as the pink trees, but these are atomic bomb survivors that despite what happened are still alive and grow fresh buds every spring. They’re worth taking a moment to appreciate just for that. They can be spotted by their dual language placards explaining what they are.

For a different park view I took the moat tour which goes around most of the castle and under the keep. Here you can get the best views of the rows of sakura leading to the castle keep along the stone-walled moat’s edge.

Getting Around Hiroshima Style 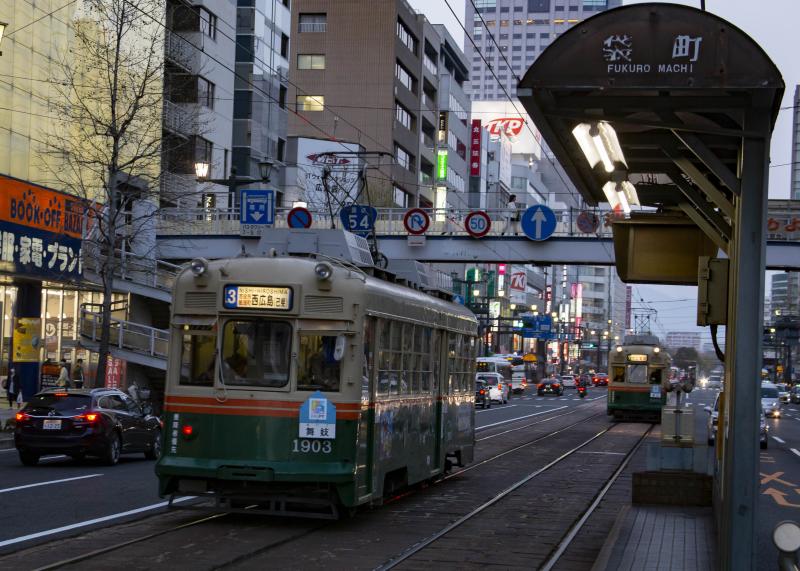 One of Hiroshima’s favorite ways to travel is by the old-fashioned trams. Sporting seven decades worth of constantly on the go street cars (The oldest running trams are from 1942!) visitors can enjoy both past and present at once in a way you can’t do anymore in most major cities. If you visit on a weekday morning during rush hour do yourself a favor and take the tram from Hiroshima Station. Not just any tram, but No. 651 or 652. These two antiques are hibaku densha, “atomic-bombed trains and run every weekday morning. Their route stops at Genbakudome-mae, the Genbaku Dome tram stop. If you can’t do that but want to see a hibaku densha now that I’ve made you aware such a thing exists one is on permanent display at the Numaji Transportation Museum. Also check out their website’s street car guide if you want to learn about what you’re riding or watching fly by.

VIDEO| Kawazusakura herald the start of spring near Yokosuka Naval Base