The city is only a 2.5-hour drive from Misawa Air Base and might sound familiar as it is also the home of two Major League Baseball players, Shohei Ohtani of the Los Angeles Angels and Yusei Kikuchi of the Seattle Mariners.

To Japanese, however, Hanamaki is also significant because it is where poet and fantasy writer Kenji Miyazawa hails from. His work is required reading in elementary and middle schools throughout Japan, thus making the area even more familiar. In fact, Kenichi Ogasawara, a graphic designer at Stars and Stripes who was born and raised in the city, was named after the famous author and local hero.

“The air and water of my hometown are extremely clean,” Ogasawara said. “The open, pastoral and relaxing atmosphere makes me relieved whenever I get back home, and I feel time is running slowly out there.” 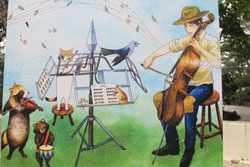 Seeking Ken’s Hanamaki, my wife and I headed north for a visit during the city’s summer festival in early September last year.

Our 8-hour drive up from Yokosuka eventually led to green mountains and rolling rice fields along the wide and rushing Kitakami River.

Sitting on a grassy property and surrounded by large trees, the museum displays Miyazawa’s manuscripts, letters, books and stationary, along with numerous panels explaining the writer’s life, thoughts and works in detail. Inside, visitors can enjoy a coffee at a café as they peruse the material or simply take in the wooden interiors.

The museum’s large garden has many large trees and monuments of Miyazawa. Strolling in the garden in the cool mountain air was really refreshing. From an observatory deck on the property, we could see farmhouses’ gray tiled-roofs, the flow of the Kitakami River and endless fields of rice.

A restaurant of fantasy 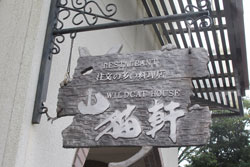 At the end of the museum garden, we stopped for lunch at the Western-style restaurant, “Yamanekoken” (wildcat house), based on Miyazawa’s children’s book, “The Restaurant of Many Orders.”

In the story, two hunters lose their way on a mountain pass and find a mysterious restaurant with a “Yamanekoken” sign. Expecting a meal, the hunters are surprised to learn this is actually a house of wildcats where they will instead be the meal. (You’ll have to read the book for yourself to find out the ending).

As I’d read this book as a child, I remembered the story well and we entered “Yamanekoken,” expecting not to be surprised by actual wildcats.

We were, instead, greeted by wildcat figurines as we entered a spacious bungalow-looking interior which made us feel like we had strayed into the fantasy world of Kenji Miyazawa.

Our “Platinum Pork lunch set” for 1,100 yen (around $10) was delicious. Hanamaki is also known for its high-quality pork, and this lunch set featured tender roasted pork slices. The crisp, soy-sauce based broth added a sweet flavor to the high-end pork. Rice, pickles and “suiton,” a local specialty dumpling soup, completed our meal. 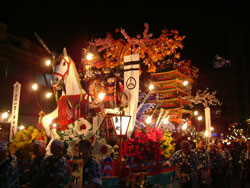 After we escaped Yamanekoken unscathed, we headed to the downtown area near JR Hanamaki Station for Hanamaki Matsuri, the city’s summer festival.

We passed many shops and buildings also named after Miyazawa’s works. So, if you are considering a trip to Hanamaki, a little bit of Miyazawa assigned reading beforehand will be a good reference to some of the sights you’ll find here.

The festival itself boasts of more than four centuries of history and is held on the second weekend of September every year. During the period, locals parade with more than 150 “mikoshi,” or portable shrines, and 20 floats throughout the entire city, enhancing the cheerful festival spirit. 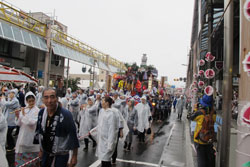 “I used to look forward to the festival every year,” Ogasawara said. “I joined people to help carry mikoshi and parade with the many gorgeous floats along the streets filled with food and amusement booths.

“It was really a fascinating memory of my childhood,” Ogasawara added.

I saw 30 or more people pulling each dashi float made up of human figures and flowers parading through the streets while traditional music was played. These images are modeled after samurai lords, historical kabuki characters and sports players.

My wife and I found young girls in beautiful kimonos with round-shaped crowns parading amongst the floats. And, just like ken described, the food and game booths filling in the streets seemed to never end.

The many floats and great atmosphere were a nice way to celebrate summer in a new place we’d never visited before. And the celebration of Kenji Miyazawa’s works throughout the city made us feel at home in the familiarity of the stories of my childhood. 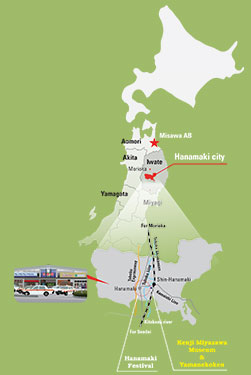 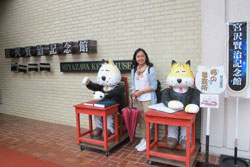 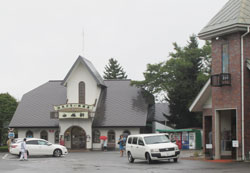 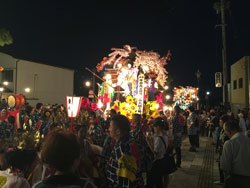 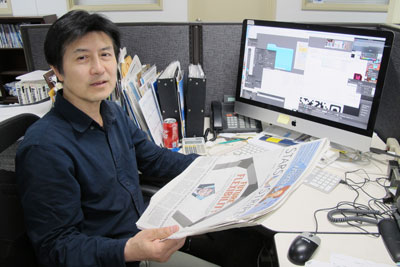 Hometown:
Hanamaki City, Iwate Pref.
Has been with Stars and Stripes: since 1982.
Favorite Baseball Team: Chunichi Dragons
Hobbies or interests: Collecting Carpenter’s LPs and CDs. I own more than 800 LPs, CDs and DVDs of the Carpenters. When their LPs were re-issued in Japan, I was asked to lend my collection. I also had a chance to exchange LPs with Richard Carpenter.
On my free time, I also manage my own website “Manganime,” where I blend manga and animation (https://manganime.jp/) to make animated shorts. 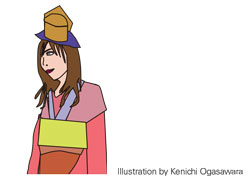 Q. What is your favorite memory of growing up in Hanamaki?
A. Participating in the famous Hanamaki Matsuri is definitely one of my favorite memories in the city.

Q. When you visit, what is the must-go place to go in Hanamaki?
A. I haven’t missed to visit my home town where I lived with parents and brothers. Some of the old shops and hot springs I used to frequent in my youth are another locations to visit.

Q. What has been the best thing about working at Stars and Stripes?
A. In my current position, I have been lucky to work with great people. My coworkers are supportive and through them I have not only become a better designer, but also a better person.

Q. How has S&S has changed throughout your tenure?
A. You may be surprised, but when I entered here, all of Stars and Stripes’ editorial work was processed in the Tokyo office. So, it was a very active work environment and I was able to see the entire newspaper-making process. We used our hands to lay out papers at that time, which has since been replaced with the Internet and computers.

Q. Final thoughts?
A. Although we now have the news at our fingertips online, for me, the newspaper is still a very important way to distribute news to our readers.

VIDEO| Exploring Japan: A trip to remember in Hanamaki