An amazing experience awaits nature lovers and curious travelers alike in the Hakkoda Mountains. Breathtaking vistas amid snowcapped mountains and emerald forests are guaranteed to inspire, while crisp air, babbling streams and chirping birds refresh. Then there are all the old-world hot springs. If there is a God’s Country in Japan – surely, this is it!

The Hakkoda Mountains, aka “Mount Hakkoda,” consists of several volcanic peaks, the highest of which (5,200 feet) is Mount Odake. On a recent TDY (temporary duty) in northern Japan, I had the opportunity to take a day trip about an hour west of Misawa Air Base to see this pride and symbol of Aomori City. You can get there via Route 103, the Hakkoda-Towada Gold Line, which starts from the city center. 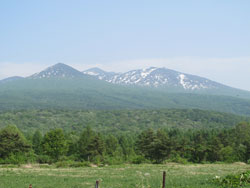 One of the most popular attractions in Mount Hakkoda is its “onsen,” or hot springs. The area is a home to half a dozen isolated hot springs, such as Sukayu, Yachi, Tsuta, Hokkoda and Jogakura spas. Each is known for the distinct qualities of its hot mineral waters. 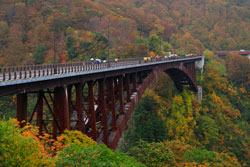 While Yachi Spa, for example, is reputed for its clear hydrogen sulfide water believed to remedy artery hardening and burns, Tsuta’s, clear sodium calcium waters are said to be good for muscle soreness and nerve pain. Hakkoda Spa’s light blue acid alum water are said to work on rheumatism and chronic dermatitis. Needless to say, all the spas are effective for relaxation and rejuvenation. Admission for each spa ranges from just 500-1,000 yen ($4.50-9).

“There is no other place with such unique characteristics,” says Aomori Tourism and Convention Association’s Yukitomo Yuno. “These are authentic, free-flowing, natural, hot springs, not artificially circulated spa water. You can tour and bathe each one, comparing the quality of the waters.”

Driving the Hakkoda-Towada Gold Line for a little more than a half hour, I came to Kayano Kogen (Heights) where the surrounding woods gave way to the peaks of Mount Hakkoda. The view of snow-crowned verdant mountainsides was so amazing that I couldn’t help but stop the car and take to the roadside with camera in tow.

Further along, the steep winding road gave way to a well-paved thoroughfare wide enough for two cars, which allowed for a comfortable drive from which to enjoying the changing mountainside views.  Although it was late May, there was still ample snow piled along the roadside.

Another half hour or so, I came to Hakkoda Ropeway Station. This ropeway gives visitors access to the mountains’ uppermost slopes, which lead to the top of Tamoyachidake, one of the Hakkoda Mountains’ many peaks. A circular hiking trail allows visitors to trek around a small marshland near the peak within an hour. 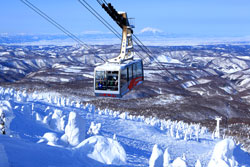 Passing the ropeway station, it wasn’t long before the pungent smell of sulfur – a telltale sign of mineral-rich natural hot spring water – filled the air. To the initiated, this is a nostalgic aroma that conjures images of long languid soaks in piping-hot water that melts away stress as you take in the majestic beauty of the natural surroundings. I saw an elegant traditional Japanese inn on my left.

Stone lanterns and large signs announcing “Sukayu Spa” in Japanese greeted me at one of the nation’s most famous hot springs. Although hot springs have been a way of life in Japan for centuries, this is the first national government-designated “hot spring health resort.” It was dubbed so 60 years ago because of its sulfur-rich waters, old-world allure, traditional indoor baths and surrounding natural beauty – a model example of the Japanese onsen, according to Yuno.

During the daytime, the bath is open to non-staying visitors for 600 yen. Drop by the spa and experience the famous Hiba-Sennin-Buro, or bath for a 1,000 people. The name of this large traditionally crafted wooden pool is an exaggeration in that it could probably only hold about 100 people at once. But it is usual in more ways than one.

To my surprise, there is no nearby place to shower and wash your body before entering the bath in this large wooden room, as is usually the case. You can’t use soap in the bath either. You just ladle some of the water over your body for a rinse before taking a dip. What’s also unusual is that this a co-ed bath with just a partition in one corner of the pool. When I was there, men occupied the center of pool, while women seemed to take up behind the partition.

The strong smell is a clear indicator that the white-green-colored water here is rich in sulfur. It was not too hot, but a brief 10- to 15-minute bath made me very warm. According to the posted signs, this hot spring contains acid-sulfur and works for various symptoms, such as diabetes, skin diseases and muscle aches.

A spa employee told me that there were guests staying for more than a month for their hot-spring treatment. The facility also has restaurant and shop. Besides the large mixed-gender bath, the spa has smaller baths furnished with showers and washing space as well as segregated pools.

If you don’t want to take a bath in public, take a 15-minute walk down to a unique hot-spring shack, called Manjufukashi (literally, bun-steamer). This is a wooden shack with long wooden benches over an underground hot spring. Hot steam wafts upward heating up fully clothed recliners from the legs up.

Near Sukayu Spa, there is an active volcanic zone with a sulfuric pond where you can explore along a short trail that leads to a stream fed by hot spring water. The 1,180-foot-long, 400-foot-tall Jogakura Bridge – Japan’s largest arch bridge – is also nearby.

The road between Sukayu and Yachi Spa is closed due to heavy snow during wintertime. However, you can see a fantastic snow walls when it reopens in April, according to Aomori Tourism’s Yuno.

“The snow on the road is removed and piled on the shoulders of the road, making 33-foot snow walls along the road,” he says. “It is really an amazing sight.”

I was too late to see the snow walls, but I did have a chance to take in beautiful Suiren-Numa swamp on drive. The road in this area widens, allowing parking for several cars. There is a trail to a wooden observation deck that offers spectacular views of a lovely small pond, marsh and Mount Hakkoda. The clear pond reflected the mountains like a mirror.

At Yachi Spa, the route is divided into two.  If you have time, take the right to another famed attraction, Lake Towada and Oirase Stream.  If you are on your way back home, take the left, which leads you to Aomori City via Tashirotai Marshland and see memorial statue of Hakkoda Incident.

The memorial statue was built in memory of 199 out of 210 Japanese Imperial soldiers who lost their way and died attempting to cross Mount Hakkoda during a cold-weather military exercise in 1902.

The marshland is a treasure trove of alpine plants, lakes and marshes. You can park your car and stroll among the bog rosemary, day lilies and azalea bushes. Hakkoda Spa is just at the entrance of marshland.  This spa is popular for its beautiful transparent blue water. 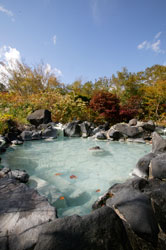 I didn’t have time to try this hot spring out this time, but I look forward it on my next trip to take in all the beauty that Mount Hakkoda has to offer.