Go back in time at Showa Living History Museum 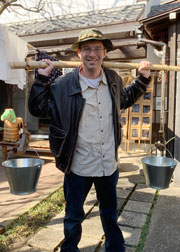 Built by architectural engineer Koizumi Takahashi, his family lived here for 45 years before his eldest daughter made it into a living history museum in 2002. For the 2019 re-release of the Japanese film, Kono Sekai no (Sara ni Ikutsumono) Katasumi Ni, or “In This (and Other) Corners of the World**,” the former Koizumi residence of 1951 has been converted into the Hojo residence of 1944-45.

Kono Sekai is about Hojo Suzu, a Hiroshima-born housewife living in the naval port of Kure and showcases her everyday life and struggles during wartime. Both the original manga and film were painstakingly researched to recreate the period accurately down to the smallest detail. The producers went as far as nailing down the daily chores performed back then to the movement of military ships in Kure Bay.

As a fan of the movie, I was excited to visit Suzu’s house. Movie aside, however, I still think this place is a must-see because it recreates a wartime home and highlights aspects of life unique to that time and place. Walking through a fully stocked house is a more engaging way to learn about history and creates greater context than if it were all just treated as artifacts under glass. Its focus on purely the home aspect also makes this a good venue to talk to smaller children about the effects of war on people in way they can see and understand. 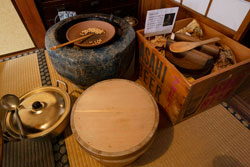 Walking into the living room was like entering a home whose harried mistress had momentarily left for a mandatory neighborhood association meeting. The low table was set for two with bowls of miso soup and fluffed up nankoumeshi, brown rice that looks generous but is rather unappetizing. Beside the table is the ‘fireless’ stove, a metal pot stuffed in a wooden beer crate full of wadded up newspaper. A kimono in the next room is in the midst of being chopped into monpe, unfashionable but practical work clothes during a time of air raids. To keep warm there’s a brazier and basket of homemade substitute charcoal.

This austere living in an otherwise normal home was the result of Japan’s ever-tightening rationing and national policies that demanded more of its people as they were reminded that “Luxury is the Enemy.” They are all also scenarios played out in the film in an almost tutorial way as the young protagonist learns how to take care of herself and her family.

What makes this the Hojo residence and not just a generic home is the support of Kono Sekai Director Katabuchi Sunao and Assistant Director Uratani Chie, who loaned the museum some of their furniture, furnishings and clothing which look to be the real life references used for the home items in the animated film. Even the hand-made substitute charcoal in the living room is their handiwork.

The film was a passion project for him and it’s clear he isn’t alone in his enthusiasm as the museum also has a large fan-donated collection of clothes ‘worn’ in the movie which replicate a broad range of apparel. 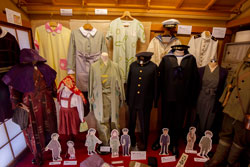 Upstairs is a treasure room for film fans as it is covered in hand-drawn pre-production art from Uratani, who was also the character designer. There are also recreated ‘props’ and a scale model of the movie Hojo residence with the roof opened up.

A traditional museum room covers rationing, neighborhood associations, women’s patriotic organizations and air raid defense. This is a step further information-wise than the Hojo residence for people who want a little more background.

Before leaving, I was invited to the courtyard to try my hand at one of Suzu’s household chores by donning a yoke with (empty) water buckets on either side, near the outdoor hand-powered water pump, two things which make me appreciate the simple and work free joy of in-home tap water. Running with the Kono Sekai theme other movie props are available to try out, or maybe you’d just like to do the washing. The bucket and board are waiting. 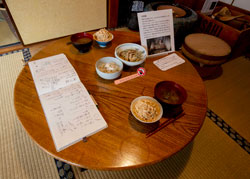 The Kono Sekai Suzu’s House exhibition will end Mar. 29, 2020 and admission is 500 yen. Photography is not allowed inside the house itself and displays are in Japanese but English-speaking guides are available. I highly recommend the guided tour to get the most of your visit. You can also use a translator app on your phone to read the signs though you should inform the staff ahead of time that you’re using an app and not taking photos. 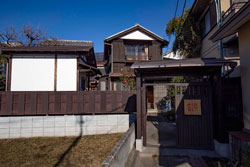 Address: 2-26-19 Minamikugahara, Ota City, Tokyo
Hours: Fri.- Sun. 10 a.m. to 5 p.m.
Admission: 500 yen
Info: www.showanokurashi.com
Tel: 03-3750-1808
Movie information can be found at: https://ikutsumono-katasumini.jp/ (official website) (Japanese only)
*Alternately the museum’s name is translated “Showa-era Lifestyle Museum,” which is also the name on neighborhood signs leading to it.
**The film was originally released as Kono Sekai no Katasumi Ni in 2016 but on Dec. 20, 2019 the current extended version began playing in theaters around Japan.