Japan’s oldest zoo, tons of museums, a French-style modern park filled with cherry trees, numerous Shinto shrines and Buddhist temples, along with the busy streets of downtown make Ueno a great attraction in Tokyo. Ueno is a few hours away by train from any of the U.S. military installations in Kanto Plain, providing an ideal destination for a day trip.

Ueno is widely considered one of the best cherry blossom spots in Japan, and more than 2 million tourists domestically and internationally visit during the high season (late March through the beginning of April). However, it is home to a host of other attractions that make for an enjoyable visit any time of year.

The station may be a paradise in itself if you are a fan of trains, as it is the terminal station for northeast Japan. You can watch trains of different colors and shapes arriving and leaving, one after another, on its 17 platforms. At the station’s large shopping and dining area, “Ecute Ueno,” you can find a variety of food and souvenirs, just like at other large-sized department stores.

The Tokyo Bunkakaikan concert hall gives classical-music lovers a chance to see top-rated performances, as well as operas and ballets. Drop by the lobby and ask a staffer about the day’s performance, as it offers shows throughout the year.

The hall became a refuge to thousands of people who were driven out of Ueno Station when a gigantic earthquake hit eastern Japan in 2011. In the aftershocks, all the JR trains were unable to operate and passengers were sent out of the station over fears of the station collapsing. As the hall has strong quake resistance, its doors were opened to accommodate the stranded passengers until trains started running the following morning.

Since all these attractions are densely packed within Ueno Park, they can easily be accessed with only a few minutes’ walk from Ueno Station.

Home of shrines and temples 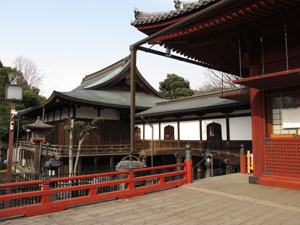 I usually start my Ueno stroll with Bentendo temple, a tiny, red-walled temple situated on an island of Shinobazu Pond at the western end of Ueno Park. As the temple is dedicated to the goddess of arts and merchants, students preparing for exams as well as shop owners flock to it to wish for success.

After enjoying the temple and pond, I walk up a slope surrounded by countless cherry trees toward the center of the park. There are a variety of temples and shrines to see along the way. In fact, the park originally was a large temple of Tokugawa Shogunate. Although most of the buildings were destroyed during the war between the Shogunate government and Imperial arms 150 years ago, some structures are still standing or were restored as temples and shrines showcasing the glorious time of samurai warriors.

Toward the end of the upper slope, there’s a French-style fountain and majestic museum buildings with the entrance to the Ueno Zoo on the left.

If the weather allows, go visit the zoo first, as the outdoor attraction takes a couple of hours to see. 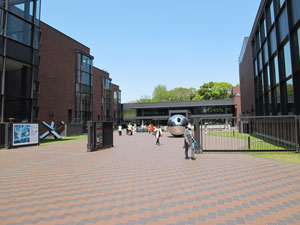 After enjoying the zoo, I like to drop by a museum or two.

Among the museums, the Museum of Nature and Science is a good pick, as there is a wide range of exhibits exploring natural history, science, and technology. There are roughly 14,000 items on display, with highlights that include displays of various species that lived and died in Japan over the millennia, a fantastic exhibit on dinosaur evolution, a cutting-edge theater where visitors can enjoy virtual space travel and a gallery featuring a global environment detector, which allows you to track real-time temperature changes through a large holographic screen. With many exhibits and events catering to children, the museum is an ideal spot for families.

All exhibits have English translations, so foreigners can enjoy them as much as locals do. 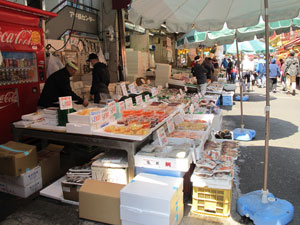 While these cultural sites are located on the hill of Ueno, there is shopping and a variety of food to enjoy down the hill under the railway between Ueno and Okachimachi station.

Called “ameya-yokocho” or “ameyoko” for short (literally, candy shop alley), the market is filled with not only candy shops but many other discount shops for food, shoes, clothes, bags, cosmetics, jewelry and candies. There’s always a large crowd to be found.

Ameyoko evolved out of an open-air black market that sprung up after World War II, and it is now home to more than 400 shops, according to Ameyoko Shotengai Association. Hours of operation depend on each shop, but typically most are open from 10 a.m. to 8 p.m.

Numerous Izakaya bars open around 6 or 7 a.m. for the enjoyment of adult-beverage enthusiasts. The hundreds of bars each have their own specialties, so stop by several to get a full sense of the area. I certainly don’t miss an opportunity to enjoy bar-hopping at the end of my stroll.

Among them, Takioka, Kadokura and Oyama are highly recommended for their tasty foods and very reasonable prices. Just push your way through the crowds in one of these shops and order a beer and sashimi to get a sense of how Japanese salarymen unwind after a long day at work.

Why not visit this attractive destination packed with rich history, culture and tastes of traditional Japanese for a superb one-day stroll?  It’s sure to be a trip that you won’t easily forget.

Ueno Zoo most popular in Japan 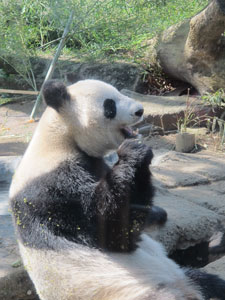 Established in 1882, Ueno Zoo is known not only as the oldest zoo but also as the most popular zoo in Japan, with 3 million visitors per year.

The zoo is made up of eight areas, such as Gorilla Woods and Tiger Forest, Elephant Forest, Vivarium and Animals of Africa. Another area is the children’s zoo, where 400 species and 3,000 animals, including endangered Sumatra tigers and Nishiroarnd gorillas, are bred.

Of all the animals, the most popular is a pair of giant pandas, Lee Lee (male), Shin Shin (female), and their newborn cub Xiang Xiang (female). The arrival of Xiang Xiang was a big story and as a result, there has been a rush of people to see the cub.

The nation’s oldest monorail connects the eastern and western wings of the zoo. The ride provides a panoramic view of the zoo and Shinobazu Pond, and should not be missed. 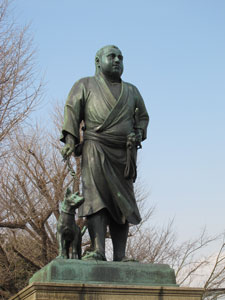 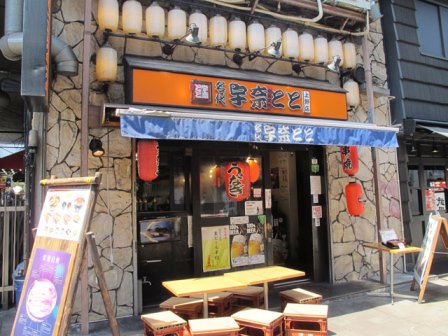 Tasty eel for a reasonable price.

Located just a 5-minute walk from Ueno Station, Unatoto is a popular eel restaurant. If you have not sampled eel in Japan yet, this restaurant offers a great chance to enjoy authentic Japanese eel bowl for a reasonable price.

Sample the ‘double’ eel bowl for 1000 yen ($9), along with eel liver soup for 150 yen. Grilled eels over high-quality charcoal are really savory and sweet while its surface is crispy and tasty. The shop’s original sauce brings out the flavor of the eels. The eel liver soup has a simple yet profound taste, which is a good mix with the rich flavor of the eel bowl.

Visit this popular restaurant and enjoy the taste of Edo.

VIDEO| Ueno: Home to the popular zoo, museums and temples