Travel around the hilly valley in the central part of northern Japan, and you will encounter an impressive rural landscape of traditional farmhouses with steep-angled roofs with a backdrop full of stunningly beautiful nature.

Majestic mountains, along with deep forests, clear streams and shinning green rice fields are the scene for these unique looking living quarters.

The inverse V-shaped farmhouses in the region look like two hands being placed together as if praying. In Japanese, it is called “Gassho-dukuri” (hands-in-prayers style). These farmhouses are widely scattered along the Sho River running through Toyama and Gifu Prefectures, and millions of domestic and international tourists flock to see the pristine rural landscape every year. 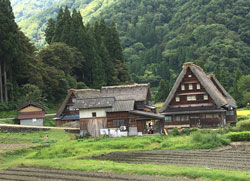 In 1995, UNESCO declared the Gokayama and Shirakawago regions World Heritage Sites. The areas have preserved the unique farmhouses from generation to generation.

Recently my wife and I made the six-hour drive, from our home near Yokosuka Naval Base, to Suganuma, one of the villages recognized as a World Heritage Site in the Gokayama region.

We left our car in the public parking lot and walked for 15 minutes along a mountainous path and through a long pedestrian tunnel. When we came out of the tunnel, we were greeted by the large, steep-pitched farmhouses with straw-thatched roofs.

According to a sign, there are nine buildings of the kind within the village and most were built in late Edo Period, about 100-200 years ago. Despite the age of the buildings, they still looked new and beautiful, and their "hands-in-prayer shape"s were as if they were praying for mercy in the severe mountainous valley.

Some of the farmhouses are used as restaurants, souvenir shops and inns. While strolling in the village, we met a group of high schoolers who were on a trip from near our home in Yokosuka City.

“We had stayed overnight at an inn housed in farmhouse,” said one of instructors who led the high schoolers. “That should have become a wonderful experience for all the students.”

We then moved out to another village in the same region, Ainokura. There are 23 farmhouses in the village, and a folklore museum housed in traditional farmhouse offered us a chance to take a closer look at the inside, outside and architectural structure of the buildings.

Surprisingly, the farmhouses were built without nails. The flexible joints of many pillars and beams are very resilient and able to withstand the large amounts of snow falling during wintertime. The structure gives the building a large attic space, which was used for cultivating silkworms. 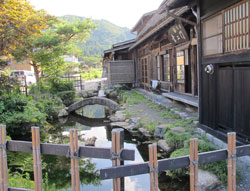 The museum also displayed some of items used in traditional settings, such as wedding ceremonies and Buddhist rituals, as well as about 200 tools and utensils used for cultivating mulberry trees and rearing silkworms. The tools and utensils are very sophisticated and highly evolved to help cope with heavy snows and severe mountainous climate.

A curator explained that the collaboration efforts by residents is indispensable for maintaining the buildings. A thatched roof is replaced within 30 to 40 years, while reinforcing work is needed once or twice a year.

“All the members in the village need to work together to maintain each residence,” the curator said. “This village has existed since the 11th century. Throughout the centuries, our ancestors kept a strong sense of community, and with long-established restoration practices and principles, they have sustained the traditional farmhouses.”

While we were there, we checked out a bamboo percussion instrument called a "sasara." Shaped like a large bamboo whisk, the instrument is used by locals while singing traditional folk music. I had a hard time with it, while my wife was able to create the mellow sounds of a gentle breeze blowing. 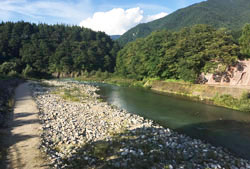 To visit Ogimachi village in Shirakawago, we drove 40-minute along the Sho River through tunnels and bridges. The winding road along the valley showed us how isolated the regions of Gokayama and Shirakawago from each other.

Ogimachi was a large and beautiful village - much larger than the first two we had visited. There were lots of “minshuku” (private homes that accept guests), restaurants and shops housed in traditional farmhouses.

Discover the history and tradition of Atsugi, Japan