Situated in the Northeastern part of Japan, Yamagata offers plenty of natural and cultural attractions throughout the seasons. From the breathtaking blooming of cherry blossoms in spring and renowned traditional festival “Hanagasa Matsuri” in the summer, to colorful mountains in autumn and heavy snow offering a paradise for winter sports lovers – Yamagata is truly a year-round attraction.

In the middle of September, my wife and I visited to experience the arrival of autumn. The drive up to the center of Yamagata from our home in Yokosuka City took us about six hours. Interestingly, Yamagata is located just in the middle of two U.S. air force bases in Japan, Misawa and Yokota, and is about a five-hour drive from either.

The Mogami River, which runs through Yamagata Prefecture and flows into the Sea of Japan, forms majestic natural attractions with the surrounding mountains, such as Mount Zao and Mount Chokai.

According to Kofuku Wakui, a minister of Yamagata Anglican Episcopal Church, Yamagata can roughly be divided into four areas depending on the climates – Shonai seaside area, the center plain of Yamagata, the northern mountainous Shinjo area and southern Yonezawa area. The particular climates reflect differences in personal characteristics of the four areas.

Yamagata boasts of its local delicacies. Yanezaba beef is some of the highest quality wagyu beef in Japan. Quality rice, fruits and soba noodles of Yamagata are also well known throughout the nation.

In fact, Tsuyahime, a Yamagata brand rice, has won “Special A” accreditation for the last six years at the annual national rice fair. With its rich flavor, sweet aroma, and full-bodied yet smooth texture, I couldn’t help but be impressed.

If you are a sake fan, be sure to check out its popular brands, Dewazakura, Jokigen and Hatsumago. Blessed with clear water, tasty rice and traditional brewing expertise, these sake brands are definitely top notch.

Yamagata is also home to an enormous number of hot springs, such as Tendo, Akayu, Kaminoyama onsen villages. 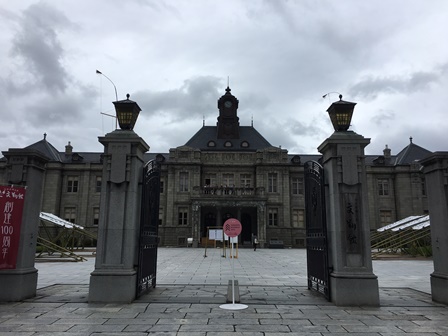 Yamagata is the capital city of the prefecture of the same name.

Bunshokan, a red-bricked corridor structure built in 1916, is another great attraction for its elegant British Reconstruction-style look and classic atmosphere. The building was used as a former prefectural office building and assembly hall.

While some rooms were used for displayed exhibitions of the history and culture of Yamagata Prefecture, other rooms and spaces can be rented for various events. In fact, when we visited there, along with its regular exhibition, we saw a lot of modern art works displayed in various other rooms for annual modern cultural festival “Yamagata Biennare.”

Yamagata Castle, built in 1357, is one of most majestic castles and is ranked in top 100 in Japan. With moats and stone fences, the castle is currently preserved as Kajo Park. The restored wooden Ninomaru gate, built in typical feudal style, shows its prosperous era and the glorious history of the town in developing into an important city of the Northeastern region of Japan.

As the temple name refers to, we hiked over 1,000 stairs to reach the main hall.

A temple staffer encouraged us by saying that if we made a wish and concentrated on it while we climbed, the wish would come true when we reached the top.

It was rather fun hiking, as there were a lot of attractions on the way, including a stone sculpture on a cliff wall and a lot of stone towers and monuments. Each attraction provided us a chance to stop and catch our breath.

After about 40 minutes of hiking on steep stone stairs, we finally reached the main hall and observation hall called Godaido. The panoramic vista from the hall over the cliff onto the pastoral valley was simply fantastic and breathtaking. I felt as if time had suddenly stopped as I looked down into the valley filled with the rice field in golden color before harvest, along with villages of traditional black wooden houses with grey tile roofs surrounded by beautiful green steep mountains. The view, I believe, has not changed much since the ancient ages.

After climbing down from the temple, we walked along the street of various souvenir shops along the street selling treats and crafts, including naturally dyed silks, wooden toys, iron and pottery pieces or local delicacies. 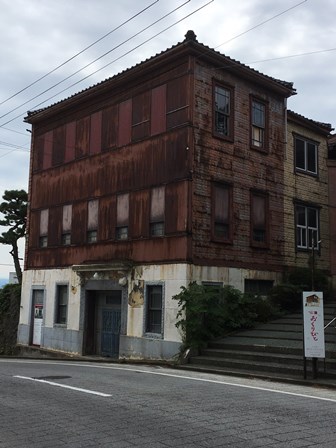 Located in the north-end of Yamagata Prefecture, Sakata, a port town, is known as a location where Academy Laureate movie Okuribito aka Departures (2008) was filmed.

The film follows a cellist who was fired from an orchestra and returns to his hometown, Yamagata. He stumbles across his new job as a traditional ritual mortician. Although he is suffering from prejudice from surrounding people, including his wife, because of strong social taboos against people who deal with death, he gradually learns the beauty and dignity of the work. The views of from Sakata seem to contribute to the work by giving it a quiet and subdued atmosphere.

So, if you are a movie fan, check out the movie before visiting this city, so that you can fully enjoy your town stroll in Sakata.

Kappo Obata, an 80-year-old three-storied Western-style restaurant building, was used as an office of funeral agency in the film. Although the restaurant went out of business 18 years ago, we could take a close look at the building while reminiscing scenes of the movie. From the hill of Hieda Shrine near the building offers a good strolling with panoramic views over the Sakata Port.

Sankyo Soko storehouse, which was also in the movie, was built in 1893 to store on the bank of Magami River. While nine of twelve storehouses are still being used, others are now museums, souvenir shops or restaurants. 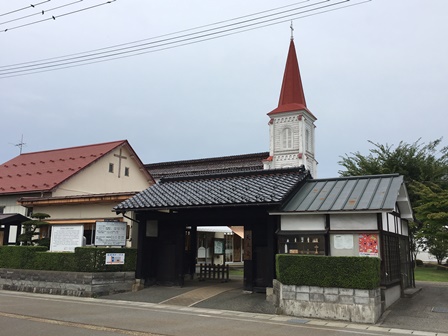 Tsuruoka City is home to Tsuruoka Catholic Cathedral, which was built in Meiji-Romanesque style in 1903. It was interesting to see the white wooden church with a steep, red roof built in the Western way. The dark brown gate and walls had a typical traditional Japanese look.

The church enshrines a statue of Black Virgin Mary, which is rare throughout the world. In fact, there is no other Black Virgin Mary statue in Japan. According to the cathedral’s home page, the statue was donated by a monastery in France to commemorate the church foundation.

Besides the cathedral, we saw a lot of unique old buildings at Chido Museum. The museum has collected and preserved historical houses and buildings built in Tsuruoka, along with tools and gears used in the local industries. Its traditional garden was beautiful and well maintained.

While strolling in the town of Tsuruoka, we happened to see the Japanese Emperor and Empress who paid visit to a local Kamo Aquarium. We took photos and waved national flags with the locals to greet them.