The exotic look created by traditional Japanese homes shadowed by gothic-style cathedrals and a Dutch Trading Post with stone port facilities, makes Hirado a great attraction on the Western island of Kyushu. Fortunately, Hirado is only a 40- to 50-minute drive from Sasebo Naval Base.

As soon as I drove across the 2,188-foot-long Hirado Bridge and got onto the island, a sign pointed me toward of Hirado Castle, so I followed.

I found the castle to be a must-see attraction. Besides its majestic white appearance on the hill behind the port, this five-story building gave me a good view of the whole town and harbor against a backdrop of blue sea and the Matsura Peninsula. Not only was the view impressive, but it also helped me plan an effective walk around the town.

The inside of the castle was used as a museum, and I was able to learn about the history of Hirado from the various artifacts and documents on the Matsura clan. The Matsura were the owners of the castle and governed the region throughout Japan’s feudal era.

As Hirado is located on the western tip of Japan, its connections with China and the Korean peninsula date back more than 1,000 years. However, Hirado’s most glorious history as a flourishing trading port started in 1550 when the first Portuguese ship arrived. Known as Firando at the time, this port town was Japan’s main international trading port for 90 years until the nation instituted its closed-door policy in 1641.

I found it interesting that this majestic castle was built in 1718, long after Hirado’s golden age had passed.

Strolling down stone-paved streets surrounded by hydrangeas in bloom, I enjoyed finding vestiges of the town’s glorious age. There were various stone structures built by the Dutch, including the 100-foot-long Dutch Wall, an accumulation of sandstone and basalt, which was smeared with a cement mixture of seashells and lime. There’s also the Dutch Well, a couple of stone-made square wells near the Trading Post. The Dutch Bridge is Hirado’s signature stone-made arch bridge over the river between the castle and downtown. All of these stone structures are found on the right side of the port next to the Matsura Historical Museum and Dutch Trading Post. So, if you visit these two attractions, you will see the fine masonry work of the Dutch from years past.

The warehouse of the Dutch Trading Post was built in 1639 and is considered the first full-fledged Western-style building in Japan. Although the current building is a reconstruction, the uniquely shaped white warehouse provides a glimpse into the history of this port town.

The main street is aligned with various shops, restaurants and cafes housed in traditional Japanese buildings. To help visitors navigate the town, signs are posted to indicate where attractions are located, so I never lost my way. As I strolled around, I noticed several folks soaking their feet in a free “onsen,” or hot spring, in the middle of town, so I joined them. There is even a place to soak your arms at Hirado Foot & Arm Spa, but it was my feet that were getting the workout. It was a very welcomed and relaxing break for my feet and legs. 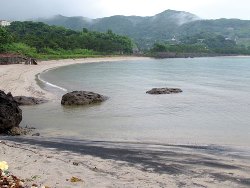 Walking up a sloping stone path to the Hirado Church, I encountered a very impressive view of the spire and cross of another Catholic church in combination with the traditional Japanese tiled roofs and grave stones of Komyoji and Zuionji temples. This really showcased how much this port town merged Japanese and Western cultures.

St. Francis Xavier Memorial Church (aka Hirado Church) is a large and beautiful gothic-like green church. It was originally built as Hirado Catholic Church in 1931 and was renamed later as St. Francis Xavier Memorial Church to commemorate the saint who introduced Christianity to Hirado in 1550. Christianity quickly spread as the Matsura clan forced the residents on the western coast of Hirado and Itsukushima Island to convert to Catholicism to help their trading efforts with Westerners. 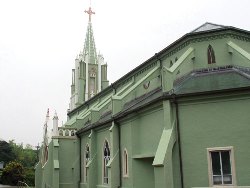 While you can enjoy the whole day strolling the streets of this port town, if you are interested in the island’s natural beauty or the history of Hidden Christians, you may want to visit Neshiko and Ikitsuki Island.

Route 22 between Hirado Port and Neshiko Beach is really mountainous with steep ascents and descents. Thanks to the well-paved road, I really enjoyed the hour drive to Neshiko, taking in the beautiful green rice terraces stretching along the mountainside.

Neshiko Beach is a mile-long white sandy beach. The water is so clean and clear that the beach was selected as one of Japan’s best 100 beaches by the Government of Japan in years past. In fact, a receptionist at Sasebo Navy Lodge told me that Sasebo locals often go to Neshiko Beach.

This beautiful and peaceful beach, however, has a sad history. More than 70 locals were executed on this beach for being Christians in 1635, after Christianity was banned by the Tokugawa Shogunate government. As a result, Christians in Hirado pretended to be Buddhists while keeping their true faith as “Kakure Kirishitan,” or Hidden Christians.

They hid their icons, paper crosses and medallions deep in storage cabinets, or “nando,” continuing to venerate them in secret. These cabinets became known as “nandogami,” or cabinet gods. Today, many Kakure Kirishitan artifacts are displayed at the Hirado Christian Museum near Neshiko Beach.

Neshiko Beach is considered a sanctuary for Hidden Christians in Hirado. A current minister of the Hidden Christians, Tadashi Takiyama, told me they always take their shoes off when they walk on the beach and hills of Neshiko.

The Western coast from Neshiko to Ikitsuki Island is known as the home of Hidden Christians. With the history of oppression and executions, I was saddened while passing through the region, although the route provided panoramic views. The 3,150-foot blue Ikitsuki Bridge looked rather mysterious against the backdrop of solemn green mountains and blue sea near the home of the Hidden Christians.

Related content on Stripes Japan:
Hit the road: Gateway to the godly island

Hit the road: City of water praying for peace

VIDEO| Fantastic view of 150,000 cosmos and 99 islands wait near Sasebo Naval Base

Hiroshima, Nagasaki atomic-bombing exhibit to be in Pearl Harbor on 75th anniversary of blasts