Tokyo station is the starting point for visits to many of Tokyo’s great sights, but the historic station itself is also a destination to appreciate that doesn’t cost a thing to see. And for those looking to see Tokyo on a budget, it’s the perfect place to begin a morning of free sightseeing in one of the city’s most culturally significant areas.

I love red brick buildings or “akarenga” from the late 19th and early 20th centuries and Tokyo Station’s Marunouchi Building is my favorite. Grand in scale and detailed beautifully, upon completion in 1914 the building served as a status symbol elevating the city to the likes of London or Paris. Though designed to be practical and to facilitate the busy train commute, the architect Kingo Tatsuno, used the building as a canvas to create art both inside and out.

One of the things I love about this period’s architecture is the detail work, not just a nice structure but the nuances in the grey granite accents, the columns and fancy Victorian roofing. Inside the north and south rotundas, Tatsuno added an extra touch in the ceilings which would discreetly carry over into another project on the other side of the country whether either of his employers was aware of it or not.

When taking in either of the rotunda ceilings from within, among the many artistic flourishes are eight animals, one in each corner. These represent eight zodiac signs, but that means Tokyo Station is four animals short. Catch the remaining four all the way down in Kyushu, where Tatsuno incorporated them in the ceiling of the Takeo Onsen gatehouse.

This is one of Tokyo Station’s lighter stories but being a place where millions have trod with different intentions some are also darker. Two markers in particular inside the station are a reminder of the sometimes violent world of Japanese politics preceding World War II because the station is the site of two successful assassination attempts on prime ministers.

The first was the “Commoner Prime Minister” Hara Takashi, who was stabbed to death by a right-wing railroad employee on Nov. 4, 1921 inside the south side tower, under Tatsuno’s eight Zodiac animals. There is a very small six-sided star-shaped marker on the ground where he fell and a brass placard on the wall near the ticket terminals. Hara holds the record for three firsts: the first non-noble prime minister, the first Christian prime minister and the first assassinated prime minister since Japan became a constitutional monarchy.

Nine years later, Prime Minister Hamaguchi Osachi would be shot inside the station by a right-wing assailant on Nov. 14, 1930. Though he didn’t die immediately, he succumbed to his wounds the following year. Sadly, these were just two of many politicians who were killed as Japan’s first fleeting attempt at democracy (not counting the Ezo Republic) gave way to military-led fascism.

Inside the station, before exiting the ticket gates, you’ll find the site where Hamaguchi was shot at the bottom of the steps approaching Shinkansen platforms 20-23. More visible than Hara’s marker, Hamuchi’s is a red granite tile on the floor with a smaller, star-shaped stud inside of it.

On the night of May 25, 1945, bombs dropped during the Tokyo Air Raid burned off the station’s upper floor and original roof. As a cost-saving measure, the repairs did not initially include rebuilding the third floor, but in 2012, the station was restored it to its full three-story height including a recreation of the original roof. If you look at the third floor you’ll notice the bricks are different than those under it. Another nice touch is that the clutter that had accumulated between the station and the Imperial Palace has been swept away, recreating the grand open space connecting the two historic sites.

To learn more about the station, walk around the outside and look for little placards with bits of information on its construction and history. 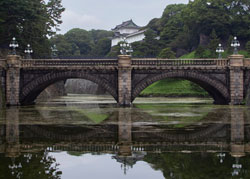 Outside the Imperial Palace walls with it’s beautiful, but pay-to-enter, garden is a park with two Tokyo landmarks that can be viewed for free.

Nijubashi, are a pair of bridges leading to the Imperial Palace’s main gate. (The one for official use, not garden visitors.) The stately stone double-arched foreground bridge has graced countless travel posters, brochures and post cards for over a century. The second steel bridge behind it almost blends into the background, but together they create a beautiful view that was made to be photographed.

Normally these bridges leading to the imperial palace are off-limits, but it is opened to the public twice a year. Once for New Year on Jan. 2, so the public may greet the emperor, and again on the reigning emperor’s birthday. 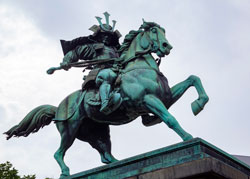 Across the road in another part of the garden, look out for the equestrian statue of Kusunoki Masashige. Kusunoki was a 14th century warlord who fought for Emperor Go-Daigo. His statue was erected during the Meiji era (1868-1912), when the new government was working to unite people in loyalty to the emperor and not to the defunct shogunate or abolished feudal lords. Later Kusunoki’s example would again be used to inspire the kamikaze of World War II.

History aside, the statue stands on its own merits as art with its dramatic pose, fine detail in the clothing and armor, the lively horse and Kusunoki’s stern visage, all rendered in sharply contrasting black and verdigris green. 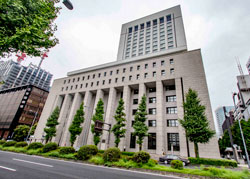 If returning from the garden to the station, or past it for my next stop, I recommend taking a slight detour to the opposite side of the outer moat from Kusunoki’s statue to see another place from which Japan was once led. Today it is the DN21 Tower or Daichi Seimei (Life Insurance) Building, but between 1945 to 1952 it was Supreme Commander for the Allied Powers (SCAP) General Headquarters, from which Gen. Douglas MacArthur oversaw the occupation of Japan. The general’s office is preserved but only occasionally opened to the public.

Another of architect Tatsuno’s great works is the Bank of Japan, a contrast to Tokyo Station. Built in 1896, this bank building is the epitome of the grey urban fortress with its high columns and intimidating proportions. 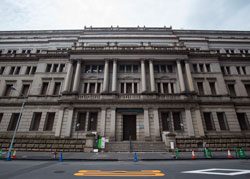 Free tours of the bank’s interior are held Tuesday-Friday 12:45 to 13:15 p.m. and do not require a reservation. I, unfortunately, visited on a Saturday so could not take the tour, but did get to visit the currency museum which is across the street.

As the name says, it’s all about the history of money in Japan from the earliest bartered goods and borrowed Chinese currency to today’s yen. It has a lot of rare and ancient money on display from all eras which one doesn’t usually get to see. I was given a handout to borrow which translated all of the displays well and made it easy to follow.

The bank and museum are adjacent to the Mitsukoshimae Station. 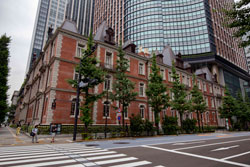 The area around Tokyo Station is partially owned by Mitsubishi, which has a few red brick and other old buildings which fit aesthetically with the old station otherwise surrounded by glass and steel sky scrapers.

One of these Mitsubishi akarenga is the Ichigokan (No. 1), a rather-convincing reproduction of the Marunouchi district’s original Western-style office building built in 1894. I’d been fooled into thinking it was original as most modern recreations of old buildings tend to be lazy with the small details but they went all out to make you believe this has been here since Victoria and Meiji were monarchs.

Though it has an art gallery you can pay to enter, it has a small free gallery with a presentation on the founding of Mitsubishi and an art room. Around the corner is the one thing I had to pay for during my day out to the Tokyo Station area, and that’s lunch. Café 1894 is what happens when you painstakingly recreate a Victorian bank and then turn that recreation into a dining facility. Eating hayashi rice and mixed sandwich lunch plates among its polished wood columns created an ambience that felt fitting after seeing so many other remainders from that era when Japan had begun mastering Western architecture and design, making it their own. 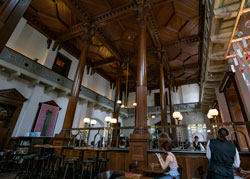 This was a quick morning trip, but there are more small memorials, historic places and even Godzilla to find if you don’t mind the walk.  Happy hunting!

For this trip I began at Tokyo Station before 9 a.m. then headed to the Imperial Palace gardens before heading back up past the station for the Bank of Japan and Currency Museum when it opened at 9:30 a.m. We had lunch at Café 1894 after. I had visited Dai-ichi Seimei on a different trip. Café 1894 meals hovered around 1500 yen which, given the location, isn’t bad.

Did you know?: Tokyo Station area used to be part of the Edo Bay

Veg ramen during your commute at Tokyo Station