Tateyama, on Boso (Chiba) Peninsula’s south end, is a beautiful castle city and a great one-day sightseeing attraction if you’re visiting from Yokosuka Naval Base. 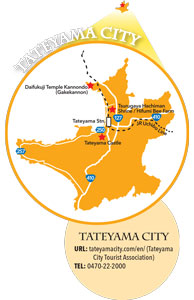 Only a 90-minute trip, including a 30-minute ferry boat ride across the bay, will get you to this relaxed area with scenic coastlines, sprawling beaches and lush greenery.

We drove through Tateyama and visited some of the nearby tourist attractions. 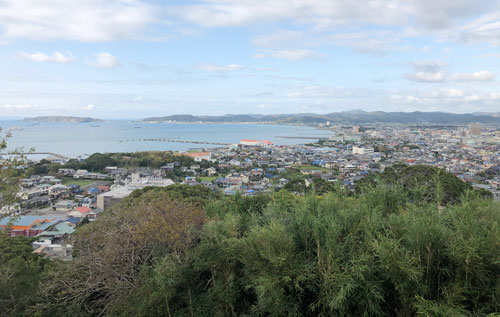 Tateyama Castle is known as a landmark of its surrounding city. It sits atop a mountain and can be seen from anywhere in the city.
We arrived at the castle park’s parking lot and were greeted by city employees disguised as ninja ready to take visitors aboard a black shuttle van up to the castle entrance free of charge.

As soon as our ninja shuttle dropped us off at the top of the mountain, the view took our breath away. From here we could see the whole city, Tateyama Port and the Japan Maritime Self-Defense Force’s air facility against the backdrop of Tokyo Gulf littered with ships and boats sailing in different directions. This view was spectacular, but not as spectacular as it could’ve been had there been no fog — this location is nominated as one of 100 best Mt. Fuji viewing spots. We didn’t get to see Fuji this time, unfortunately.

The castle itself is the traditional tower style you may have seen in your travels around the country. This isn’t the original building as it was demolished in 1614, only 34 years after it was built by the Satomi Clan. Its lord, Satomi Tadayoshi was relocated, to the western part of Japan, when his father-in-law Okubo Tadachika, a powerful direct subordinate of the Shogun, fell out of favor and was banished along with Satomi and other relatives. In 1982, this replica of the four-storied and three-layered castle was built.

After admiring the architecture of the replica castle, we took a stroll around the well-manicured traditional Japanese garden, teahouse, souvenir shop, children’s athletic field and park on the surrounding grounds.

Our next stop was Tsurugaya Hachimangu, the main Shinto shrine in the Southern Chiba region. 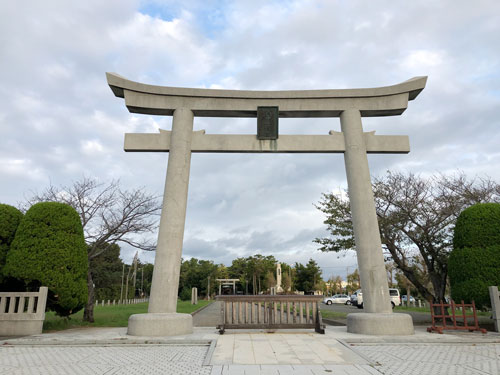 The huge stone torii gate and a wide, long approach to the main shrine was amazing. The old, wooden main shrine was elaborately decorated with tiny dragon and tiger sculptures. Since its foundation in 717, the shrine was venerated by various feudal lords of the Minamoto and Satomi Clans throughout the medieval era.

Make sure to stop at the bee farm you’ll find next to the large torii gate. Hifumi Yohoen has been around for 70 years and features nanohana honey. The shopkeeper gave us a sample, convincing us that we could not leave without our own bottle of this bright golden honey with a unique and fresh flavor for 1,650 yen (about $14).

As we drove along the main street of Tateyama City, we passed the JR station, which has an eye-catching orange tile roof, white walls and large windows. This, coupled with tall palm trees lining the front, gave it the air of a Spanish castle or church rather than a train station.

Tateyama Bay near the station offered us a pleasant drive. We enjoyed the beautiful sunset made up of bright orange reflection on the sea and silhouettes of ships and boats against the backdrop of Miura Peninsula. It was just a calm and peaceful view. The changing colors of the sea and sky drew us to pull over along the road several times to catch the perfect photo.

Off in the distance we could see Daifukuji Temple, also known as cliff temple, looking like it was floating mid-bay — an optical illusion. We arrived after it was closed, but if you’re here before 4:30 p.m., check out its 11-headed Kannon, the Goddess of Mercy, carved directly into the cliff. An offering for sea safety, this statue dates back to 717 A.D., when a Buddhist monk Gyoki visited the cliff to carve it. As the temple is also known for a great spot to view the gulf, we decided to come back to check out both the great landscape and historical carved statue someday soon.

Our trip to the area ended on a peaceful note as we saw the sun disappear into the distance over the waters of Tokyo Gulf. There is so much to discover on this side of the gulf and we are already planning our return to see what more Tateyama will enchant us with. 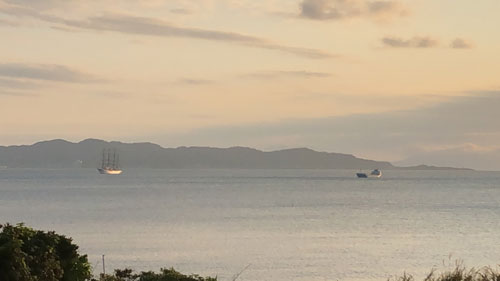