Daruma Doll a symbol of perseverance and good luck

Daruma Doll a symbol of perseverance and good luck

Have you seen these curious-looking spherical red dolls?

As you travel around Japan, you may have noticed the papier-mâché dolls with the big circle eyes at souvenir shops and at local businesses. These are called Daruma dolls modeled after the founder of the Zen tradition of Buddhism, Daruma Daishi or Bodhidharma. 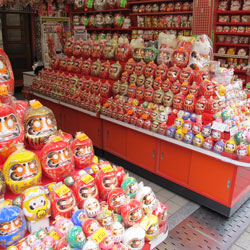 According to legend, the monk remained in a sitting Zen meditation for nine years subsequently losing his arms and legs due to atrophy.  The round shaped Daruma doll without arms and legs reflects this legend and is a symbol of Daruma Daishi’s perseverance.  Today, the dolls are also considered to be lucky charms.

The round-shape and weight on its bottom returns the doll to an upright position when tipped over, which make them a popular gift of encouragement. Students who are preparing for an examination or persons who are about to open a new business often buy a doll for their success in school and business.

You may see them with different eyes, blank, with only one pupil, or with both pupils painted in. The tradition is to mark one pupil on the blank-eyed doll when you make a wish. You paint in the other eye’s pupil when your wish is granted.

Get a Daruma Doll when you visit a Buddhist temple next time. It sure will give you a good luck!

MY FAVES: Shrines and temples to visit in Japan