Every year thousands of people flock to parks, malls and other attractions to marvel at the elaborate and colorful light displays – from the northern island of Hokkaido to the southern islands of Okinawa – set up to ring in the holiday spirit with dazzling brilliance throughout Japan.

These displays, or “illuminations,” are some of Japan’s most popular winter attractions, drawing as many as 80,000 annual visitors to smaller locales such as the Itoman Peaceful Illumination in Okinawa, and millions in bigger cities on the mainland.

In addition to promoting the holiday spirit, there are more practical reasons for winter illuminations in Japan, according to Takashi Otomo of the Japan Illumination Association.

“Daytime is getting shorter, the air becomes dry and clear, the temperature difference between day and night decreases and fine weather is continuous – all these wintertime factors in Japan make optimal illuminations that look beautiful,” he said. “Actually, winter is the best season for illuminations in Japan.” 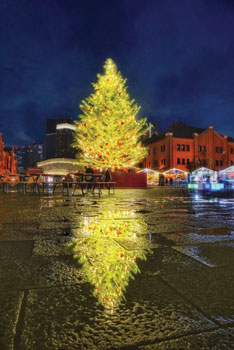 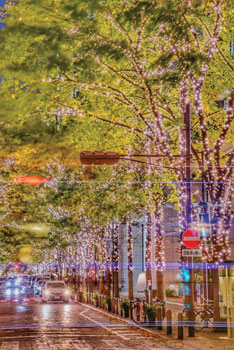 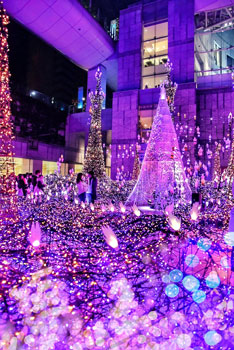 The tradition of winter illuminations in Japan is generally considered to have started in Osaka when Tsutenkaku Tower was lit up for the National Industrial Exposition in 1903. The following year, Meiji-Ya, a high-end import grocer, displayed a lighted Christmas tree outside in Tokyo’s Ginza Ward to commemorate Japan’s victory in the Russo-Japanese War. However, Otomo said the practice likely started earlier.

“In the 1890s, some foreign ships berthed at Kobe Port would be decorated with lights to celebrate various occasions,” he said. “Kobe locals who saw these illuminations adopted them for their own celebrations; that would be the very start of this tradition (in Japan).”

Although public facilities have been decorated with illuminations for longer than a century, individuals started illuminating their houses about 20 years ago, according to Keiji Nishimura, managing director of the Japan Illumination Association.

“Company employees who were dispatched overseas were introduced to holiday illuminations and brought back this Western holiday tradition to their homes in Japan,” Nishimura said. “It has gradually spread year after year and today, you can see illuminated houses throughout the nation.”

“These days, we are seeing individuals purchase some expensive illumination devices that had only been used for public space in the past,” Otomo added. “As people are becoming more aware of the beauty of holiday illuminations, and home illuminations are catching on. I expect to see them continue to increase every year.”

The spread of home illuminations, in part, is a result of the modern-day light-emitting diode, or LED, which makes this energy-consuming tradition more efficient and less expensive. “There are a lot of merits to using LEDs,” Otomo said.

One LED consumes only 0.06 watts, less than 10 percent of what a conventional electric bulb uses. It also produces a lot less heat, reducing the risk of fire to trees and wooden structures.

The recent trend in public illuminations is to create elaborate illusions by combing different LED lights with high-tech 3-D projection mapping, according to Nishimura.

Luckily, for those not yet ready to invest in millions of LEDs and laser lights for their front yard, most of the public illuminations are free and easy to access by public transportation. However, while a few may run until late February, most end after Christmas or New Year’s.

Many of these are held outdoors, so they are great for maintaining social distancing guidelines while still allowing your family to enjoy one of the holiday season favorites safely. There are many to visit within a short drive from your base. Below are a few good options near some of the bases in Japan. Stay safe and happy holidays!

With information from Metropolis Japan.

During the holiday season, towns and parks across Japan are decked out in beautiful lights. If you are checking out some illuminations, here are some helpful Japanese words and phrases to make the experience even more fun.

“Tanoshikatta desu.” = I enjoyed it.

You can also say it in “Uchinaaguchi” (island dialect) like this:

VIDEO| Enjoy a some of Japan’s illuminations virtually