Have you ever wondered about the development of Japanese beauty ideals that we see today? Although the trends have vastly changed, the modern look of Japanese fashionistas has its root buried deep into Japanese history.

The chronicles called kojiki ("Records of Ancient Matters") and nihon shoki (the second oldest book of classical Japanese history) reveal that even in ancient times, specific beauty customs such as of painting the face with red pigments did already exist. Diverse forms of makeup - such as cheek colors and facial powders - were imported into Japan, along with other cultural aspects from China and Korea. It is said that the first Japanese face powder was produced by a Buddhist priest. Apparently, he delighted the Japanese Empress with his newest invention so much that he set the trend for what should soon become one of the biggest cosmetic markets in the world.

Black Teeth as a Symbol of Beauty and Liberty

During the Heian period (794-1185), Japanese beauty products broke free from the influence of Chinese models and created a more distinct aesthetic of its own. This included straight long hair, white powdered faces, and repainted eyebrows. Despite this transformation, most make-up remained only available to the world of the elite. About the same time, a quite unusual beauty ideal set foot in Japan - the blackening of teeth, called ohaguro.

Teeth, black as night, were seen as beautiful and remained popular as a beauty ideal until the 19th century. Many Westerners who visited Japan described ohaguro as a repugnant Japanese custom which disfigured Japanese women by making the women intentionally unattractive. However, many Japanese girls were allowed a relatively large degree of both social and sexual liberty, so it is much more likely that this social ritual is a celebration of the determination of matured women.

The Beautiful Harmony of Red, White, and Black

By the early Edo period (1600-1868), the focus shifted onto detailed treatises on etiquette, which also included teachings on the adequate way of using cosmetics. During this period, cosmetics generally centered on a palette of three basic colors: red (lip rouge, fingernail polish), white (face powder called oshiroi), and black (tooth-blackener, eyebrow pencil). The white face powder was used to create a stark white complexion, often artfully contrasted to the natural shade of the surrounding skin with a carefully contoured edge at the lower neck below the hairline. The lips were painted onto the white foundation and usually rendered smaller and slightly higher than the natural lip shape.

It was during this era when women were particularly concerned with the application of face powder in order to create a flawless complexion that was regarded as "the essence of a beautiful woman."

Although refinement and sensitivity where cherished traits when it came to the general application of make-up, a trend in the late Edo Period made the use of heavier lipstick increasingly popular. Pigments that were produced from fresh safflowers became so expensive, it was said to be even worth its weight in gold.

With the beginning of the 20th century, the focus shifted toward quick application and more convenient make-up practices that were in strong correlation with the advancement of women in society and, more importantly, the workplace. Face powder and lipsticks began to be sold in a broader range of shades other than the traditional white and red. Emulsions and variations of skincare products appeared on the market as the cosmetics industry became increasingly aware of the Western sphere of influence from the 1910's onward. Especially after World War II, Japan's aesthetics became heavily influenced by Western mass media, especially American magazines and movies. 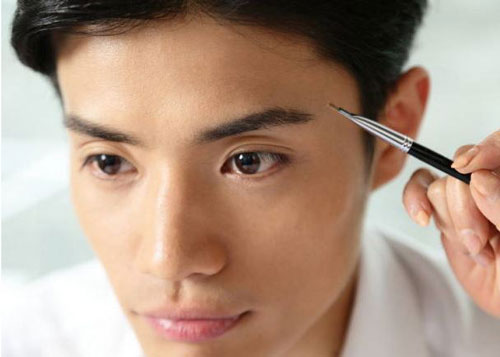 In present days, Japan has been able to become one of the worldwide market leaders for cosmetics and beauty products and has furthermore been able to firmly establish itself with miscellaneous innovations made in the name of beauty.

Although the white heavy face powder look of the Edo period doesn't hold true today and mainly survives in a re-enactment on stage, beautiful white skin is still a crucial beauty ideal for many Japanese. The leading advancements in scar tissue reduction techniques of the beauty industry are directly linked to the emphasis placed on unblemished skin - a beauty ideal that has been existent long before any Western influence touched the Japanese islands.