When it comes to culture and personality, Americans and Japanese are often said to be "completely opposite" - but what makes people say that?

Being "negative" or "positive"

In Japan there is a stronger focus on "shame culture", meaning that the Japanese are often modest, cautious and realist - which can sometimes be perceived as being nefative. In contrast, Americans seem to have a more positive mentality. Could this stem from their audacious "pioneers' history"?

Enter the house with their shoes on? Or off? 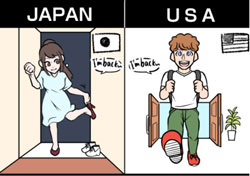 Japan has a culture of laying down tatami mats at home. It's difficult to do cleaning if sand and mud enter into the narrow gaps of tatami mats! In addition, the futon (where you sleep) is laid directly on the floor. In America, for the most part people won't sit on the floor. So perhaps for them, there is not much difference between the floor inside and outside!

Why is the house so small? Or so big?

This one is easy to understand considering the population and land area. Divide the land equally to each person, and each Japanese person can get a square land of 54m×54m in Japan, while that would be 29,767m×29,767m per person in America! From this difference, you can understand why American houses are so large and Japanese houses are so small.

Cooperate with others? Or to be unique? 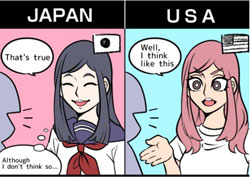 Japan is a country where people have a strong idea of "doing all things together". Sometimes the idea of "I don't think so, but everyone agrees, so I should agree, too," comes into their head even subconsciously. On the other hand, America puts more focus on independence, so perhaps it's natural that "everyone is different from others". In such a country, you have to voice your opinions if you want to be understood by others, and it can be said that you need to own the skill of expressing yourself naturally.

Work on weekends? Or not?

Japanese people must respond when they receive a call from the boss or the company, even during holidays. Or they will be given a warning. And they hate that. On the other hand, American people prefer to freedom and hate being fettered, so it seems they are less likely to work on holidays. 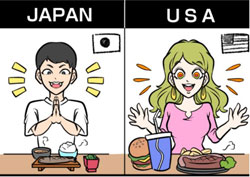 Something that each of these two countries tend to find shocking about the other is the amount the eat at each meal. In Japan, failing to clean your plate is very rude. To us Japanese, Americans seem to normally eat an amount that we're not sure we could measure up to! Considering the frontier period, it's more reassuring to be "sufficient" than "insufficient".

In Japan, usually for health reasons "taking home leftovers" is not allowed. On the other hand, in America, "to-go boxes" are prepared, so it's reasonable that people take leftovers home. 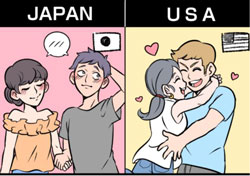 The Japanese care about people around them very much and in general do not like to have physical contact in public. They don't like kissing outside either, for being lovey-dovey can be seen by people around them.

In contrast Americans have rich facial expressions and are good at using body language. They are quite sociable and often prefer to actively express love to their partners.

From these cultural points and characteristics, Japanese and Americans are so different!

There are many more differences between Japanese and Americans besides what we've mentioned, and of course many similarities too!

I hope we can accept each other's values and establish a good relationship!

When looking for a partner, Japanese pay attention to blood type