Editor’s Note: When you travel, please practice preventative measures at all times including wearing a facemask, social distancing and washing/sanitizing your hands often. Follow guidelines set by your base command.

Among the many attractions and cities to visit within the vast Kanto Plain, Yokohama is one of the major hubs with a lot to offer. It is one of Japan’s largest port cities and draws millions of visitors and commuters every year.

For those living on Yokosuka Naval Base, NAF Atsugi, Yokota Air Base and Camp Zama, Yokohama is a great destination for a full day of activities. Yokohama’s waterfront is especially popular and is easily navigable by car, train, foot and even by “Sea Bass,” a ferry that shuttles tourists around beautiful Yokohama Harbor.

The Sea Bass service has four stops on its route - Yokohama Station,” “Minato Mirai,” “Pier Akarenga (Red Brick Building)” and “Yamashita Park.” While you can stop at each station on regular ferry, Sea Bass offers an express ferry that will take you from the station to the park in 15 minutes.

My wife and I recently hopped on the Sea Bass to enjoy the cityscape and for a quick, relaxing cruise to the park. Although it was a hot and steamy day, the 15-minute cruise on the air-conditioned vessel let us enjoy the view of Yokohama’s entire harbor in a very comfortable and fun ride. The seats are installed low at nearly water level, so it felt like we were swimming through as we passed some of the area’s popular buildings and structures, like the Redbrick Storehouse, Bay Bridge, Oosanbashi International Passenger Terminal, and Marine Tower.

Soon, we were dropped off at the Yamashita Park pier and ready for a day of exploration.

NOTE: All the locations in this story are open, however all are taking precautionary guidelines to prevent COVID-19 spread. For more information, visit each attraction’s website. 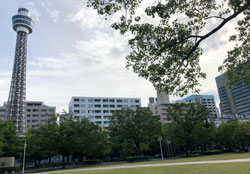 Yamashita is a large Western-style park facing the Yokohama Harbor with a bunch of green space surrounded by many trees, and decorated with colorful flowerbeds, fountains and statues. The memorial ship Hikawa Maru, which is berthed at the park, along with Yokohama Bay make for great backdrops for photo-shooting here. On the other side of park, we found Marine Tower and Hotel New Grand, a famous hotel where Gen. Douglas MacArthur was a guest just after the end of WW II.

We walked along the park’s pedestrian path to the Yokohama Doll Museum. Once we entered the fancy four-story building, we felt like we were being watched. We soon found the source of our strange feeling was coming from the hundreds of dolls “watching” us from their glass cases. Surrounded by countless dolls made us feel as if we strayed into the world of fantasy. 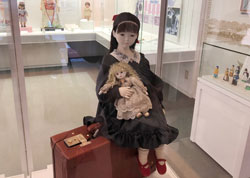 While the first floor is a shop where you purchase a variety of souvenir, and fourth is a theater, the second and third floors house more than 10,000 dolls.

The second floor is called “The World Festival” and displays dolls from over 100 countries. The third floor is home to a variety of traditional Japanese dolls, such as Kokeshi and Hina. Several old sets of Hina dolls from different eras and regions showed us the variations in styles and traditions of dollmaking.

While the Puppet Craftsman’s Studio demonstrated the puppet-making process, stuff animals of Disney characters and plastic figures of popular animation movies are also displayed on the floor. “Memories of Dolls,” one of the exhibits, displays dozens of photos of children and dolls throughout the post-war age. The photos were organized into a neat timeline and show many happy children embracing dolls. 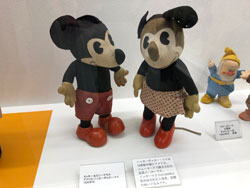 Social distancing measures in practice, temperature checks and hand sanitizer at entry. Groups of 10 people or less only.

After leaving the watchful eyes of the many dolls, we headed to the Hikawa Maru ship to have a look. Though it looks like the ship is permanently embedded into a concrete platform below, once inside we realized that it is actually still floating at the pier and readily moves with any change in the water.

The admission to enter the ship is 300 yen (about $2.70). According to a handout, the Japanese ocean liner was built in 1929 and ran a regular between Yokohama, Vancouver and Seattle. With the splendid dishes served aboard and beautiful art deco interiors, the ship was dubbed “The Queen of the Pacific.” The first-class social hall and dining room reminded us of James Cameron’s 1997 movie, Titanic.

Considering the small admission fee, the access we had was pretty good. On the upper deck, we checked out a special suite-cabin Charlie Chaplin used during his visit to Japan in 1932. We even tried our hand at the steering wheel and compass in the Captain’s rooms on the highest N2 and N3 Decks. We also had access to the lower decks to have a look at the ship’s engine, generator, galley and third-class rooms. 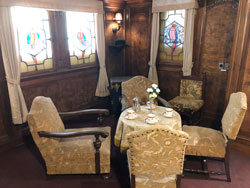 According to some of the historical photographs on display, the cruiser was converted into a hospital ship during WWII. The ship was damaged three times while on mission and barely made it out. After, it was refitted as an ocean liner and returned to its original Yokohama-Seattle sea route until it was decommissioned in 1960. The Hikawa Maru completed 238 voyages and transported 25,000 passengers and has been permanently berthed at its current location since 1961. 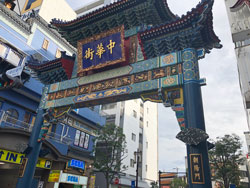 Hungry, we headed to Japan’s largest Chinatown, which is only a five-minute walk from the ship.

When we entered through a decorative, blue traditional Chinese gate, we saw thousands of tourists walking along the streets filled with restaurants, cafés, grocery stores and souvenir shops housed with traditional Chinese facades. Vendors standing in front of the facades kept shouting, trying to draw in customers.

We dropped by one of the dumpling shops, Hotenkankaku, to sample xiao long bao (steamed soup dumplings). We chose both seafood and pork dumplings and found the rich flavor of the meat paired with the crispy bun made a great match with Chintao Beer. Our stop in Chinatown was a great way to wrap up our Yokohama stroll on a hot afternoon. 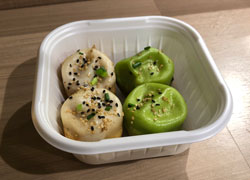 Temperature checks and hand sanitation before boarding. Facemask encouraged and an air-purifier has been installed in passenger cabin.

Yokohama's Chinatown has a ton of restaurants, but only one Setsuen